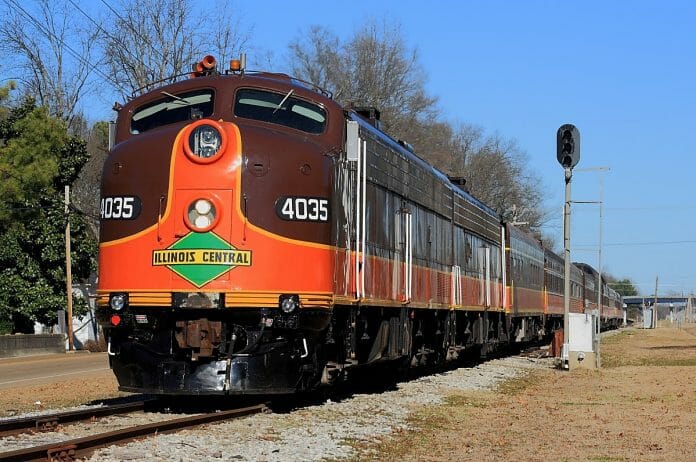 All Aboard! Grenada Railroad is boarding passengers on Sunday, June 5, for a historical train ride along the Illinois Central Line.

The 90 mile trip will depart at 10 a.m. in Horn Lake and arrive in Grenada at 4 p.m. Charter buses will meet passengers in Grenada to drive passengers back to their vehicles in Horn Lake. Modeled after the 1950s Illinois Central Railroad Line, the train will be painted in chocolate brown and orange colors. The train will have five different cars for passengers to enjoy from different time periods.

Best Seats In The House

There will be two bar tavern, lounge style cars modeled after the 1916 Paducah car and 1918 Calumet Club car. The Paducah car was a first class car used in New Orleans and Miami. Both cars will seat about forty people with bars and tables for costumers to enjoy. Sandwiches, chips and soft drinks will be available for sale on the train ride.

Train Conductor, Niel Bagaus, said the best seats in the house will be in the Vista Dome car. The car was built in 1955 and nick-named the “Jackson Square.” It is built sixteen feet off the ground and surrounded by glass.

There will also be two additional cars modeled after 1950s coach cars on the Illinois Central Line. These cars will hold about eighty people each. Bagaus promised that he would try and rotate passengers throughout the ride so everyone could experience the different cars.

Bagaus and his crew will don 1950s period apparel during the trip. Bagaus’s uniform will consist of a black three piece suit with gold buttons and a chain across the front. Passengers are encouraged to wear period pieces too, but it is not required. The train will stop for a picture opportunity along the tour as well.

Learn About the History!

The train ride will also double as a historical tour for passengers. Jackson and Water Valley, Mississippi were important stops along the Illinois Central Railroad in the 1900s. There will be a pamphlet on the train with information about all the different Mississippi stops.

The town of Grenada is known for its story of legendary conductor Casey Jones. Jones was running two minutes behind schedule in Grenada, making another freight train approach him for impact. Before he stopped the brakes, he told others to jump off the train. Jones was the only one killed in the accident on April 29th, 1900, and is still remembered today.

Bagaus said his favorite part of the trip is always the passengers. “I love chatting with them about the train and the routes. When you’re on a train everybody is your friend.”

Tickets for the train ride $75 for adults and $50 for children ages two to 12. Tickets can be purchased at GrenadaRail.com.

The train for the Horn Lake to Grenada trip will be featured in Memphis on Saturday, June 4, at the Memphis Railroad and Trolley Museum from 10 a.m. to 5 p.m. This pre-tour event is free and open to the public.

Jac Bedrossian is a intern for HottyToddy.com and is a student at the Meek School of Journalism and New Media at Ole Miss. Jac can be reached at jacbtv@aol.com.