Suanne Strider: No Place in Particular – A Celebration of Southern Poetry and Music 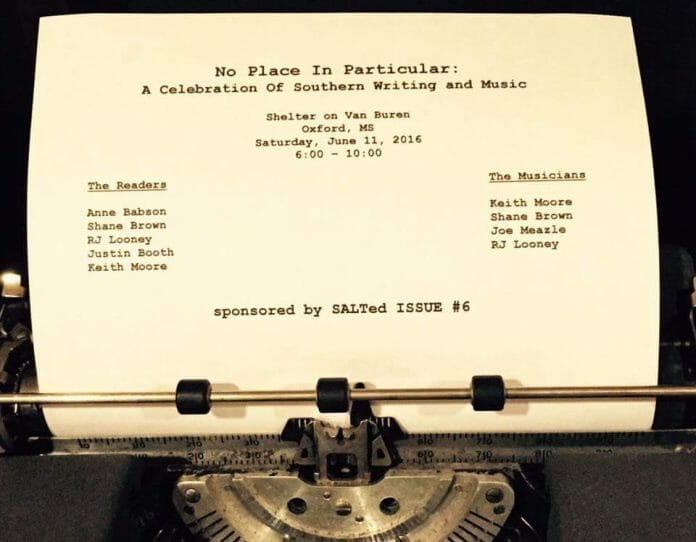 At the lovely new Shelter on Van Buren in Oxford tomorrow night (June 11) will be an affair to remember, and also one for the history books.

Salt Zine, an Oxford literary outfit dedicated to publishing works of Southern Avant Garde literature, is hosting an event they have poetically named “No Place In Particular.” This special program will showcase some very important literary figures presenting their works of poetry and prose via spoken word. The readings start at 6:00 p.m. and the music starts at 8:00 p.m.

Shane Brown, son of the late, great Oxford writer Larry Brown, is following in his father’s footsteps into the world of authorship, and will be reading selections from his own collection of short stories. He will also be unveiling to the world a selection from what I am going to go ahead and dub “The Lost Manuscripts of Larry Brown.” Shane was recently cleaning out some things in his father’s writing room (which Larry called his “Cool Pad”) and came across a tall stack of notebook paper that had been covered by a book for as long as Shane could remember. Shane noticed that the papers were covered in his father’s own handwriting, written in pencil. Shane couldn’t believe his eyes as he sorted through the stack. There were thirty pages of a never-before-seen short story written by his father Larry. Those papers have been covering a treasure trove for years that no one even imagined existed.

Shane Brown will be among a very select group of poets and writers who have been invited to attend and present at this very special occasion. The name of the piece from “The Lost Manuscripts of Larry Brown” that Shane will be reading is titled “lowridin’” [sic], and Shane was gracious enough to provide us with a sneak peek of the title page.

Salt Zine has been around since 2010, when three pioneering literary enthusiasts and lovers of the Arts came together to create a forum through which Southern writers who would normally not have a venue for their work could have their works published in a sophisticated manner that would showcase the weird and wild proudly in a series called Salt.

Laura Cole Darby, Sarah Beth Reddick and Jimmy Pitts were the innovative and determined group who worked to make the Salt series of literature a reality. Sadly, Jimmy passed away shortly before the release of Salt 4, but Laura and Sarah Beth were determined to continue on with the plans the original three had made. Salt 5 came out shortly thereafter, despite the heartache still felt by all after the tragic loss of Jimmy Pitts. Tomorrow night will celebrate the debut of Salt 6. Since there is no cover charge for this event, patrons are urged to purchase copies of the newly released Salt 6 for just $5.00 (or whatever one lover of the arts may choose to donate, as Salt Zine is a grassroots, barebones organization that does wonderful work for the promotion of Southern Avant Garde, and mostly by way of charity and the grace of God).

Anne Babson is a four-time Pushcart Prize nominee who hails from New York City, and luckily for us, she is on the roster to perform her unique brand of slam poetry in “No Place In Particular.” Anne spent time in Oxford while attending Ole Miss, working toward her PhD in Medieval Literature. She is best known in the Oxford literary circles for her amazing collection of poetry called The White Trash Pantheon, published through Oxford’s own Vox Press, Inc. The aforementioned collection is nothing short of genius; it is no wonder that the piece won the Colby H. Kullman prize at the 2014 Southern Writers Southern Writing Conference.

This award honors not only excellence in literature but also the inherent Southern qualities within that literature. Not bad for a New Yorker! In The White Trash Pantheon, Anne uses settings, characters and plot structures borrowed from the Greek Classics and sets the scenes for her poetry smack dab in the middle of modern-day Southern U.S.A. Copies of The White Trash Pantheon will be available for purchase at tomorrow night’s event. Anne has been published on five continents; won a plethora of literary awards; and has a very entertaining, smart and downright hilarious blog called “The Carpetbagger’s Journal.” With well over 42,000 hits, this blog (the title being an obvious reference to the fact that Anne is a New Yorker through and through, but she can turn Scarlett O’Hara quicker than you can say, “Gone with the Wind.”)

Anne had this very Anne Babsonesque-style statement to share regarding Salt Zine and the importance of the continuation of the series and others like it in the South:

“The relaunching of Salt is an important milestone in literary Oxford. The conversation in American letters has shifted from New York exclusivity to internationally open pockets of regional creativity, where the Avant Garde isn’t constrained by Manhattan rents. No experimenter can’t afford an atelier that requires a Rockefeller to subsidize it. Between the virtual spaces of blogs and online journals and the brick and mortar spaces of oases of cultural innovation in the American heartland, new writing isn’t happening exclusively below 14th St. and above Houston. It is now happening in Oxford, in New Orleans, and in other places less geographically centralized than The 20th century allowed. That’s why it matters that forward-thinking writers engage with journals like Salt.”

Keith Moore is an Oxford “townie” who may be better known to townies as a member of the local Oxford band The Wineskins. In 2013, the band released their first (but hopefully not last) album titled Rattle My Faith. You can catch The Wineskins’ next show at Shelter on Van Buren Saturday, June 25 at 8:00 p.m. But Keith also has an amazing talent with the written word. To demonstrate this most effectively, below is an explanation of how Keith first began to write poetry and what motivated him to do so–described most appropriately in Keith’s own poetic words:

“The Struggle” is a collection of poems I wrote during our first few weeks of living on an eight-acre farm in Yocona, Mississippi. We had moved from Nashville, where I had written songs for the publishers Fame and BMG over an eleven-year period. The farm we bought needed a lot of work. As I wrote about the struggle to take back the land, I was also writing about my struggle to wake up my own soul. When 9/11 happened in the midst of all of this, I kept writing, and the poems took on the hue of an even greater struggle.

Justin Booth is the ex-con poet referred to above. Justin has received many accolades from literary critics across the nation. Justin’s first introduction to the works of Larry Brown happened when Justin was incarcerated. During his stay, an English teacher of his from college sent him a package with books enclosed, and they just happened to be works by Larry Brown and Barry Hannah. Justin had never heard of Larry Brown or Barry Hannah, but Justin claims that it was those books…Larry Brown’s in particular…that changed his writing forever. Justin explained to me that he had never read a book that he understood as being a mirror of the way he sounded when he spoke. Justin has a very thick Southern accent, as did Larry. It was that serendipitous box containing the beauty that was (and always will be) Larry Brown and Barry Hannah that changed Justin’s writing forever. He began to write as he spoke, and no longer felt that there was any mistake made in doing so.

Justin’s work caught the eye of Bryan Borland, a Pushcart-nominated poet from Little Rock, Arkansas, and the owner of Sibling Rivalry Press, LLC, a young publishing house whose goal is to develop, promote, and market underground artistic talent–those who don’t quite fit into the mainstream. Borland describes his professional interest and eventual kinship with Justin in this shocking yet redemptive narrative:

Three years ago, when I first met Justin Booth, he was homeless, jittery, and possibly drunk at a monthly poetry workshop, a vagabond prince holding court with the Poet Laureate of Arkansas, an 80-something grand southern dame of a lady. I stood back and listened to him talk, quoting lines from beat and beat-up poets of the last century, watching her head nod along with the rhythm in his voice, and I knew why this strange pairing worked. Both of these people with two very different stories simply and absolutely believed in the art and truth of the poem. Flash forward to this past Saturday night, and there’s Justin Booth, no longer vagabond prince but poetry king, at the symphony with a beautiful woman on his arm. Booth is the real deal, rugged royalty with a talent for writing raw. How he got to this point makes for damn fine reading. His poetry is the best salvation: it gets you clean only to make you dirty all over again. — Bryan Borland, 2013 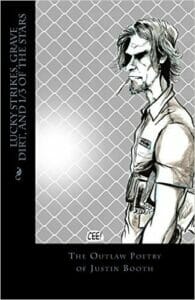 Justin Booth is a contemporary poet based out of Little Rock. His second book, Lucky Strikes, Grave Dirt, and 1/3 of the Stars: The Outlaw Poetry of Justin Booth debuted in May, preceded by Trailer Park Troubadour (2013). He is actively involved in the Arkansas area’s poetry scene, performing readings and managing a social media following of other southern writers and artists.

Lucky Strikes, Grave Dirt, and 1/3 of the Stars is part artistic manifesto, part autobiography, and all quality poetry. Justin Booth takes images from the grimy regions of the South and manages to coax a certain relatable beauty out of them. He gives insight into the life of the “outlaw” with highly descriptive poems full of the rough wisdom of southern streets.

RJ Looney is an accomplished poet from Arkansas who has been published as a poet online and in print for over thirteen years. He served as Poetry Editor for the online version of the poetry zine “Thunder Sandwich.” He also hosts a radio program in Little Rock called “Under the Influence.” RJ’s collection of poetry called A Crow’s Breakfast: Poems from The Low Road is a brilliant piece of work and will be available at the event for a small fee. Copies of this great work will be available for purchase at the event.

R.J. Looney said, “I’d like to say that what Laura and Sarah Beth are doing with Salt is such a great thing, largely because they are bringing writers of poetry and prose to the public, good writers, that you might not read otherwise if not for their publication.”

When R.J. is not writing, he enjoys playing the harmonica. He will be joining Keith Moore and Shane Brown to create a musical trio called “Fret and Worry.” So not only do we get one wonderful night of geniuses reading their amazing poetry, we also get to dance and have a little fun after the spoken word performances are finished.