What do two retired oil and gas men know about running a barbecue business? Jim Rogers and Ray Smith, long-time friends and former co-workers, are putting their faith in a proven track record of success. Dickey’s Barbecue Pit began in Texas in 1941, slowly growing to more than 500 locations in over 43 states.

“Ray and I have been going to Dickey’s since 2000 and every time we’ve gone it’s been delicious; plus it’s the fastest growing franchise in America,” said Rogers.

“I’ve been watching Dickey’s grow for years,” said Smith. “I love grilling in the backyard, and Jim has the same interests. Then Dickey’s really started to grow when they introduced the new fast casual model, and I took notice. After 34 years in the oil and gas business, it was time for a change; I asked Jim if he was interested, and here we are.”

Originally from Jackson, Mississippi, and a life-long fan of Ole Miss, the first thing Smith asked Dickey’s was if they had availability in Oxford. When they said yes, he said, “Put me down for that one!”

Not Your Dad’s Dickey’s

Rogers and Smith own one of the new fast casual models of Dickey’s, which debuted in 2015, but is the first of its kind in Mississippi. The new concept offers guests a choice of six meats (beef brisket, chicken, pulled pork, pork ribs, polish kielbasa sausage, jalepeno cheddar kielbasa) and eight sides (including slaw, potato salad, mac & cheese and more), available in customizable portion sizes. Meats are chopped and prepared in front of you as you make your way down the line in the open-kitchen floorplan.

“I like that this experience doesn’t require you to sit down and be waited on,” said Rogers. “It’s fast casual, but you get slow-smoked meats cooked on site every day.”

If you’re looking for the same menu as a traditional Dickey’s in another location, you’ll likely notice a few differences. “This has a slightly different menu than the traditional Dickey’s,” said Rogers. “The difference being, we don’t have fried items or baked potatoes; everything else is pretty much the same.” 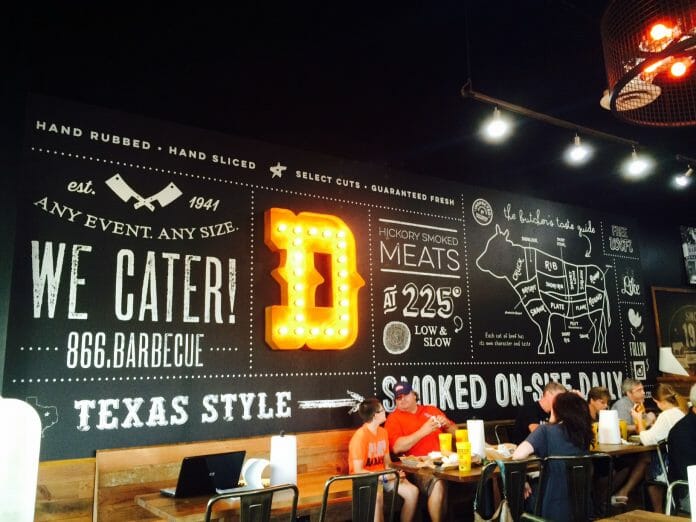 The first question from many barbecue lovers often concerns the smoking process. Rogers explained, “The smoker runs 24/7 and there’s always a stick or two of hickory wood in it. The bigger cuts of meat, such as pork butt and brisket, are smoked 13 to 14 hours, all night, every night. We pull them out in the morning, wrap them up, and put them in heat and humidity control. In the morning, we cook ribs, chicken and sausage and let that smoke throughout the day as we need it. Come evening, we reload the smoker with the big stuff.”

Smith said the hickory wood used in the smoker at Dickey’s is locally procured. “There’s a gentleman just outside of New Albany who brings us the wood, split and seasoned,” he said. “You don’t want it too green and you don’t want it too dry. He brought me some good material to work with; you can smell the smoke in the parking lot; it’s the real thing.” 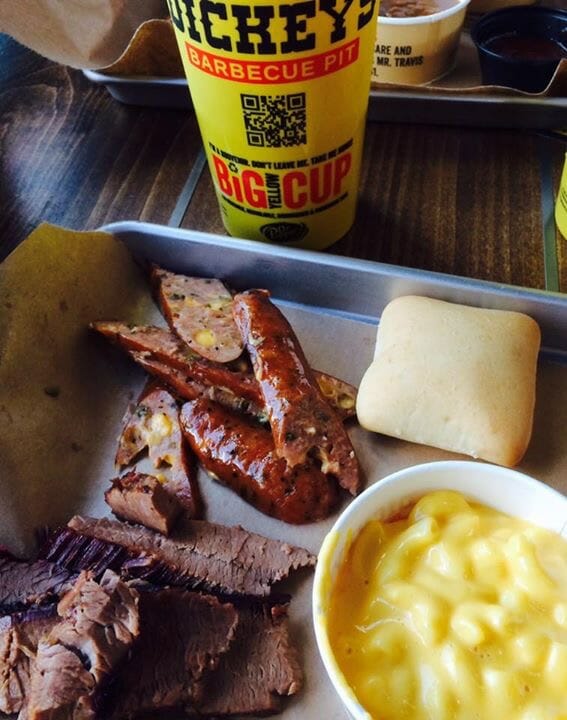 Never been to a Dickey’s Barbecue Pit? Smith recommends the brisket for first timers and Rogers recommends the mac & cheese, baked potato casserole and barbecue beans. “Out in Texas, it’s all about the brisket, and in Mississippi, it’s the pulled pork,” said Smith. “When brisket is done right, it’s really good. I think we can introduce some folks to brisket.”

Rogers and Smith are excited about their new venture and looking forward to meeting everyone in Oxford. Their goal with the new restaurant, according to Rogers, is to deliver the highest- quality meat—cooked perfectly each time, a top-notch guest experience, and a restaurant that’s always clean, friendly, and a fun place to come.

Dickey’s Barbecue Pit is located at 2311 West Jackson Avenue in the Belk shopping center and open every day from 11 a.m. to 9 p.m. The restaurant offers full catering and easy online ordering. To find out more and view the menu, visit Dickeys.com or find them on Facebook. 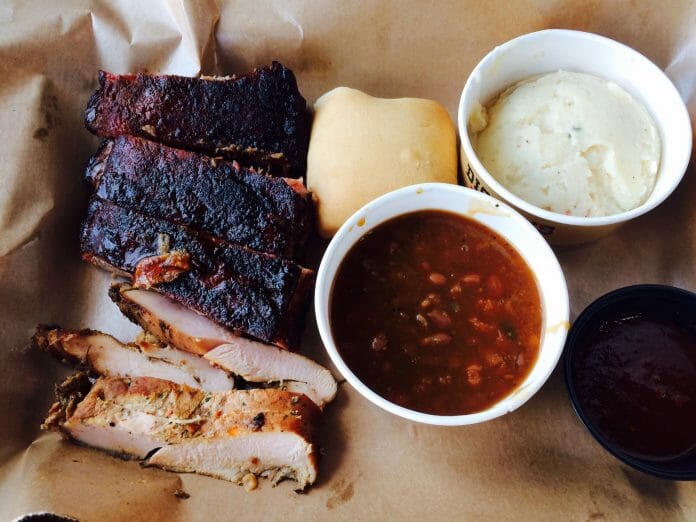 Liz Barrett Foster is the EatingOxford editor for HottyToddy.com, an award-winning business journalist and author of the recently published Pizza: A Slice of American History. Liz ran the popular restaurant information site EatingOxford.com from 2009 to 2015. Liz can be reached at liz.foster@hottytoddy.com.

Facebook
Twitter
Pinterest
Previous article
On Cooking Southern: The Days of Wine and Noses Are Here to Stay
Next article
New Ranking: Mississippi’s Community College System #1 In The Nation!