On Cooking Southern: The Days of Wine and Noses Are Here to Stay 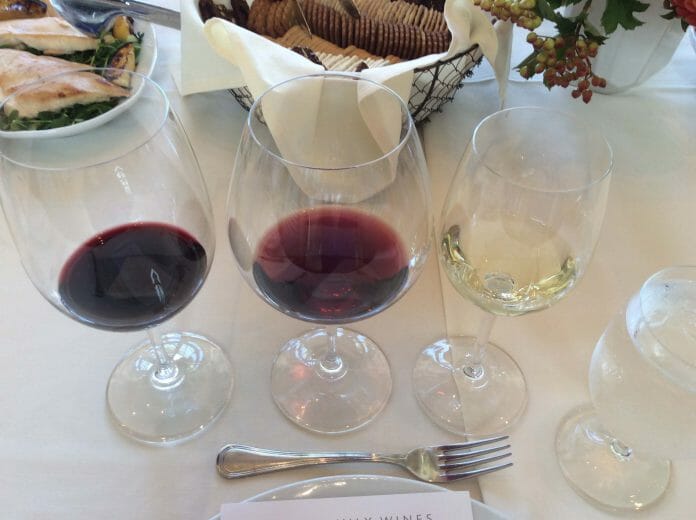 SOUTHERNISM OF THE WEEK
High Falutin’: A situation, attitude, or circumstance in which one party is putting on airs, acting high and mighty and making noises that position him or her as better (schooled, bred, or financially endowed) than the rest of the room.

Folks in our area are pretty savvy about good food and good drink. We specialize in topnotch tailgating, elegant parties and great restaurants. Heck, we can even boast about being home to multiple award-winning chefs and food writers.

But I’m here to tell you, most of us Mississippians can still learn a thing or two about the world of the grape.

The Old Bride just returned from a tour of the Napa Valley wine country. My last tour of this most famous American wine region was in 1981. Within hours of commencing the tour, it was apparent that I had a lot of catching up to do. Like everything else during the past 35 years, the wine industry has evolved.

Our tour group consisted of members of the board of visitors for the Wake Forest University (WFU) School of Business, their spouses, and WFU representatives. The university’s own Ian Taplin, author of The Modern American Wine Industry: Market Formation and Growth in North Carolina, provided contacts and counsel to the organizing team. Taplin, director of the WFU international studies program and a professor of sociology, is a scholar on the changing competitive landscape among ultra-premium wineries in Napa Valley, CA. He has studied California’s cult wineries and is developing academic data on growth of the North Carolina wine industry, seen by many experts as a possible alternative to the state’s declining tobacco industry.

We learned that the number of U.S. wineries at year-end 2015 numbered 8,702 (Fransen, 2016 study). This included 4,054 wineries in the state of California, 719 in Washington State, 689 in Oregon, 367 in New York and 262 in Virginia. Texas, Pennsylvania, Ohio, Michigan and North Carolina round out the top ten of states with the most wineries. Kentucky is one of the top ten wine-producing states.

According to Taplin, there are more than 522 wineries currently operating just in the Napa Valley. Only about 50 percent of them are financially profitable on a regular basis. He said that, like other agricultural products, fluctuations in weather and pests can affect the bottom line even more than ups and downs in the stock market.

He said that the Napa region boasts numerous micro climates and soil types. Different types of grapes might be the preferred planting on the same hill, depending on the altitude, moisture, soil type, and even which way the hill faces. The same variety of grapes grown at different spots on the same hill will produce different tasting grapes and wines.

Our tour included examples of this diversity as we toured five wineries built from different business models. The wineries ranged from a small, organic, family-owned farm and winery totally operated with eight employees and three yard dogs, to a high-tech boutique winery created by a lover of classic rock-n-roll, that employs the world’s most advanced scientific technology for soil sampling, plant hydration and harvested-grape sorting.

By my count, the tasting tour included about 37 different wines. I lost count at 34, although I recorded my top 5 favorites.

We learned that Napa and neighboring Sonoma “cult” wineries have loyal followings, selling in many instances about 75 percent of their bottles annually direct to consumers or through wine clubs. Small “cult” wineries are considered to be those that produce about 5,000 to 49,000 cases per year. Once a winery achieves sales of about 10,000 cases annually, it needs third-party distributors outside the region.

Mississippi remains one of eight states that don’t allow direct-to-consumer shipments other than through a third party. This means that small wineries can ship to us, but the expense for shipping three bottles will cost more than $130 and require extra paperwork. OUCH.

Early European botanists began shipping American grape specimens to Europe for further study. It was that trans-Atlantic exchange that almost wiped out the European wine industry during the late 19th century. A microscopic American louse called Phylloxera hitched a ride and attacked the vines of of the European vitis vinifera vineyards. That same tainted rootstock saved the industry. Today, all the vitis vinifera varieties grown in Europe are grafted onto American rootstock vines that are resistant to Phylloxera. There is still no cure for the pest.

By the early 20th century, winemaking flourished in the Southwestern and northeastern states. Even some Southern states had been successful until the Civil War. But like beer and distilled spirits, the U.S. wine industry was destroyed when Prohibition outlawed alcoholic spirits from 1920 to 1933. It took until the 1960s for Americans to gravitate back to wine as an alcoholic beverage of choice.

As the advertising gurus once said, “we’ve come a long, way, Baby.” The U.S. continues to be the largest wine-consuming nation since 2010. We spent $53 billion on wine in 2015, including more than $38 billion on U.S. wine. This represented 23 consecutive years of growth for U.S. wine sales.

GRILLED VEAL CHOPS WITH MUSHROOM WINE SAUCE
During my recent Napa Valley tour, our group enjoyed numerous dishes prepared with local California wines. These veal chops were divine. NOTE: Veal, which comes from beef calves of either sex, was an outcast butcher cut for more than 40 years because of notoriously inhumane farm practices. But with implementation of humane practices, even the most politically correct of chefs are cooking it for its subtle flavor and tenderness. The best veal chops are loin or rib chops cut from pastured, grain-fed calves. Look for the details in the label. 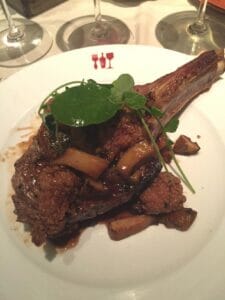 Rinse and pat the chops dry; place in sealable bag. Combine chopped onion, black pepper and 1 cup of extra virgin olive oil and pour over the chops. Seal bag and turn to coat evenly. Repeat several times during one to two hours at room temperature.

Heat two tablespoons of butter with the olive oil in a large pan on medium-high heat. Stir in shallots and simmer until translucent. Add mushrooms, garlic and a pinch of salt. Continue stirring slowly until mushrooms release liquid and start to turn brown. Add wine and simmer until liquid reduces to half.

Add stock and continue simmering until sauce has reduced by half again. Stir in parsley and thyme, simmering for another 5-10 minutes. It should be slightly thickened. Add salt and pepper to taste, stir in remaining butter and lemon juice until smooth. Keep warm but not simmering, uncovered, until ready to serve.

Remove chops from bag and pat with paper towel to remove excess oil. Sprinkle with salt and pepper. Allow to rest, uncovered, for 5 minutes before placing on preheated medium-hot grill. Grill 6 to 7 minutes on first side until marked. Flip chops and continue grilling to desired doneness – 3 to 4 more minutes for medium rare to medium, depending on grill.

Remove to a platter and cover loosely with foil until ready to serve with a large spoonful of mushroom sauce over each chop. Pair the chops with grilled veggies and a starch such as risotto, grits soufflé or polenta.

SHAVED BRUSSELS SPROUTS SALAD/SLAW
This salad is all the rage in California, and deserves to be popular – it’s delicious. Convert the recipe into “slaw” by substituting mayonnaise for the acid. 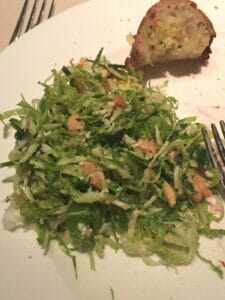 In a medium bowl combine the vinegar/lemon juice, lemon zest, honey, mustard, shallot, garlic, salt and pepper. Grate the eggs on large holes of a box grater into a separate bowl and set aside. Whisk the dressing mixture, and while whisking, drizzle the oil until blended and emulsified.

Prepare the sprouts: Hold a sprout by the stem end and thinly slice crosswise up to the stem. Break the layers apart and slice again to make julienned slivers. Place sprouts in a large bowl and top with the nuts and half the grated egg. Drizzle with the dressing and toss to coat completely. Allow to rest for 15 minutes; toss again with most of the grated cheese. Top with remaining egg and cheese to serve.