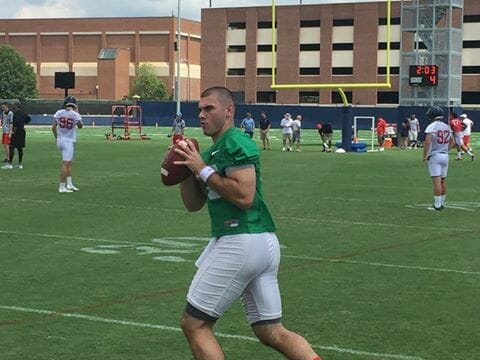 The Rebel football team wrapped up the second week of fall camp this past Saturday. The Rebels are now two weeks away from the season opener against Florida State.

The offensive line seems to be slowly getting more concrete. While left tackle has still yet to be determined, it seems that Javon Patterson, Robert Conyers, Jordan Sims and Sean Rawlings are the frontrunners holding down the other four spots.

“I feel really good about the offense,” offensive coordinator Dan Werner said. “With the success we had last year and all those guys leaving, the younger guys took it upon themselves to step up and make this thing right. So far, they’ve worked really hard in the offseason. They’re in great shape and they’re locked in mentally.”

When asked about what adjustments have had to be made regarding the loss of veteran running back Jordan Wilkins, Werner got straight to the point.

He said, “The next man up, just as if there was an injury. We are going to put the next guy in, we’ve got a bunch of talent at that position, so the next guy knows he has to come up and compete.”

Defensive coordinator Dave Wommack addressed the media to talk about the defenses progress since the last scrimmage that resulted in the offenses favor.

“I think we’ve made a lot of progress, especially in the last week,” said Wommack. “I was disappointed in the first half of the scrimmage last week. We didn’t tackle well. We didn’t chase the ball very well. We’ve emphasized those points and guys are starting to fit things better. Some of the young players are coming along. We’re making progress.”

Courtesy of Maggie Mitchell. She can be reached at Mlmitch1@go.olemiss.edu.