After years of working in education and government service, writing novels and children’s 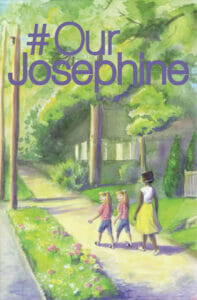 books and volunteering across the State of Mississippi to spread a positive message of hard work and kindness, acclaimed authors and entertainers, Kat and Margaret King of Oxford, Mississippi, are now delving into the television and film industry.

Our Josephine is the duo’s personal account of growing up in 1950s Mississippi and their reverence for the young African American girl who befriended them during their summer visits with their grandmother in Vicksburg. Josephine was their great grandmother’s caregiver who taught them how to care for others and stay out of trouble as innocent children incapable of understanding the intensity of race relations surrounding them. The adorable tomfoolery you’d expect from their novels and children’s books set on a very real backdrop of how things just were before integration in public schools in Mississippi will capture audiences on a national level.

“In this touching, delightful story, the reader feels that the story is ‘twice told’ with sensitivity, reality and fully expressed emotion,” said The University of Mississippi Chancellor Emeritus, Robert Khayat. “The book will be enjoyed by readers regardless of gender, age or race.”

Kat and Margaret King are well known for their novels, Y’all Twins?, Which isWhich? and Our Josephine, and their children’s books, The Backyard Campout, BOO! and Kicking and Screaming, but their endeavor to make a film adaptation of their most important book at this moment in history, only to give back to the amazing people of Mississippi they’ve met along their journey, certainly deserves the tax incentive that runs out in the next ten months.

“It is critical for the State of Mississippi to have a film like this made right now,” said Kat King. “The State and the country are at a generational divide, one where this new generation of young people truly are colorblind when it comes to race relations—and that is a great thing!”

“This movie will capture the baby boomers’ deep appreciation for the African American culture that helped raise them in the Deep South to celebrate the progress the State has made since then,” said Margaret King.

The King Twins have met with potential producers and are currently working on plans for funding, giving full consideration to finding the right investors for this type of endeavor. They are considering several state, regional and local foundations to assist in the fundraising efforts and feel confident in moving forward with pre-production as their plans solidify for the film. In the meantime, the King Twins are developing television adaptations of their works.

In addition to regional representation by Pinkonomics IMC, LLC, the King Twins have signed with Breezewood Productions and Nashville Publicity Group to promote their brand and future endeavors in entertainment.

For more information about the King Twins’ artistic endeavors, upcoming appearances or community outreach, visit their website at http://www.yalltwins.com or e-mail yalltwins39@gmail.com. Pinkonomics IMC, LLC can be reached at 662.607.9042.