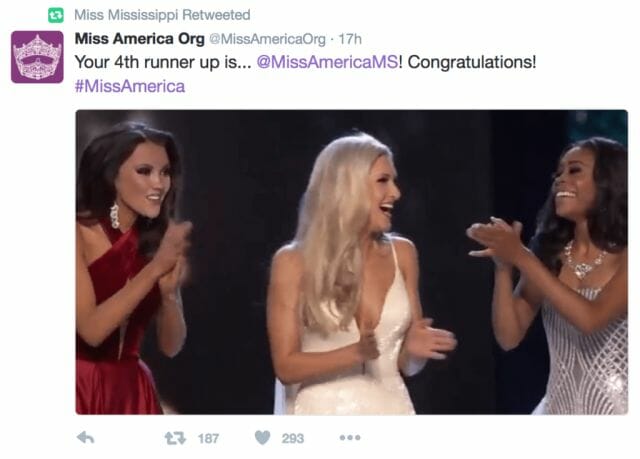 It was another good showing for the Magnolia State. Hannah Roberts of Mississippi finished as first runner-up in 2015.

In the talent competition, Lewis sang “A Piece of Sky” by Barbra Streisand.

An education major at Mississippi State roughly 100 fans clanged cowbells to her support during the pageant in Atlantic City. Lewis takes home a $10,000 scholarship.

Lewis competed under the platform of “Treat Me fairly.’ Dealing with a growing facial deformity, she endured ongoing bullying and insults from classmates. Lewis has since undergone corrective surgery.

“Flaws make you awesome and goodness knows I have a lot of flaws,” Lewis wrote on her Facebook page. “Ladies, perfection doesn’t exist! Don’t try to be perfect, try to embrace the best of yourself.”

Lewis was “Mississippi Outstanding Teen” in 2009

By Russ Jones HottyToddy.com Editor-In-Chief. He may be reached at russ.jones@hottytoddy.com.