Enjoy our second”Reflections” post — one of many vignettes and stories featuring memories of days gone by. This installment is from Dr. Ed Meek.

If you would like to contribute your own Reflections story, send it, along with photos, to hottytoddynews@gmail.com.

Dr. Jim Webb was chairman of the department of English at Ole Miss and was a devoted William Faulkner scholar. Dr. Webb and I spent a lot of time at Rowan Oak, Faulkner’s Oxford home which Ole Miss purchased from the family.

We were walking through the formal garden which Mr. Faullkner had cultivated and maintained when I saw what looked like a tree limb propped up with a fence post there in the backyard. Dr. Webb explained it was an old apple tree that a storm blew down and Mr. Faulkner had propped it up with this fence post after months of complaints from Miss Estelle, his wife, to cut down the tree.

Dr. Webb laughed and said Mr. Faulkner just could not cut down the old tree which had never borne fruit, so he just propped it up with the fence post.

Mr. Faulkner had died, and I was again in the formal garden when I noticed that old tree had one limb reaching to the sky and on it were several apples. It died that summer and the tree was cut down. 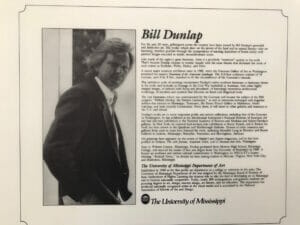 Nearly 30 years later, I asked my good friend Bill Dunlap to do a painting I could have reproduced to sell as numbered and signed prints with proceeds to support the art department. Bill is easily the best known artist ever to graduate from Ole Miss. His works are held by museums and galleries and in private collections around the world. Bill also is devoted to the Ole Miss department of art, and I never see him these days that he is not talking about the need to raise money for a new art building.

Bill agreed to do the art piece, and we began to discuss the subject matter. As it would turn out, Bill saw that same apple tree I had seen, knew the story behind the tree, and we agreed the tree would be good subject matter for his painting. But, there was a problem.

Bill insisted the “apple tree” was, in fact, a pear tree. I was equally insistent that he was wrong, and Bill painted “Mr. Faulkner’s Apple Tree.” We made prints and sold them with proceeds going to the department of art. The original piece of art hangs today in the suite of offices used by Chancellor Jeff Vitter at Ole Miss. 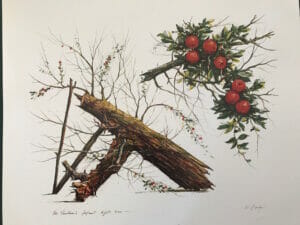 Some months ago, I was asked to give a talk at the university library and show some of the photos I have given to the library. While researching photo files for this presentation, I came across a picture of Dr. Webb and that “apple tree.” I looked carefully at the leaves and thought that perhaps Bill was right after all; maybe it was a pear tree. I took the black and white photo to a friend who would know, and sure enough Mr. Faulkner’s “apple tree” actually was a pear tree.

I sent an e-mail to Bill to confess my mistake. As is so typical of Bill who is well known to be “easy going,” he said, “Well hell, Ed, let’s just chalk that up to creative license of the artist; the red apples made for better subject matter any way.”

My apologies to both Bill and Mr. Faulkner. 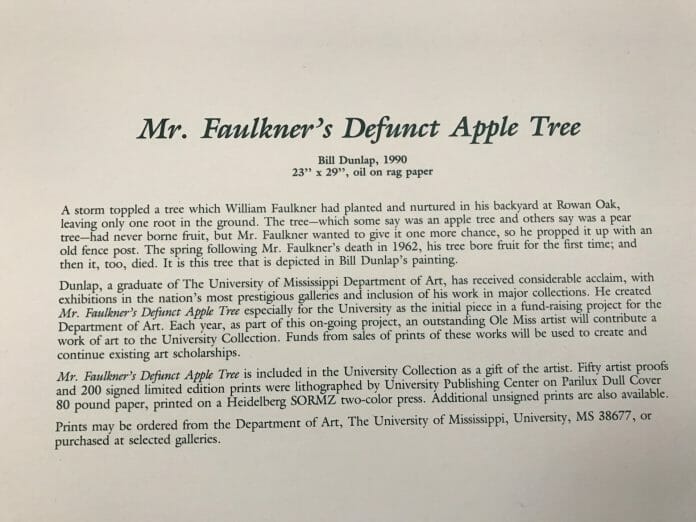 Dr. Ed Meek is former Assistant Vice Chancellor for Public Relations and Marketing at the University and CEO of Oxford Publishing, a national publishing and trade show group. He is the founder of the Tupelo Furniture Market, one of the largest exhibition centers in America, Fellow of the American Council on Education and was awarded the Mississippi Governor’s Distinguished Citizen Award. He is the author or co-author of several books and currently serves as publisher of HottyToddy.Com. He and his wife, Becky, are benefactors who established the Meek School of Journalism and New Media at The University of Mississippi. Email him at edmeek1@gmail.com.