WATCH: All of Shea Patterson’s Offensive Plays Against A&M

Shea Patterson led the Ole Miss football team to a comeback victory against the Texas A&M Aggies, and here is how he did it.

Shea Patterson wowed in his debut against the Texas A&M Aggies. Ole Miss fans around the country have a renewed faith in the team now that Patterson has come out and showed what he can do.

But if you gave up on the Rebels before Saturday’s game and spared yourself from the misery of being a Rebel fan, you missed one of the best games from a freshman quarterback.

Courtesy of Randy Morgan and to read the rest of this article go to OleHottyToddy.com

In hindsight, the move worked out. But in the moment, Hugh Freeze had one slight reservation about playing freshman quarterback Shea Patterson.

Freeze was unsure about how Patterson would potentially handle playing at Texas A&M in front of 100,000 people-plus.

“That was maybe my one hesitation. If I was gonna let my mind wander from anywhere other than what’s best for this team, it was do I really want to open his career at Kyle Field on Saturday night against Myles Garrett and those guys rushing at him.

“But after preparing him for the week, and knowing him for as long as I have, I just felt he was ready,” Freeze said on the Paul Finebaum show.

Courtesy of Connor Riley to read the rest of this article go to SEC Country.com 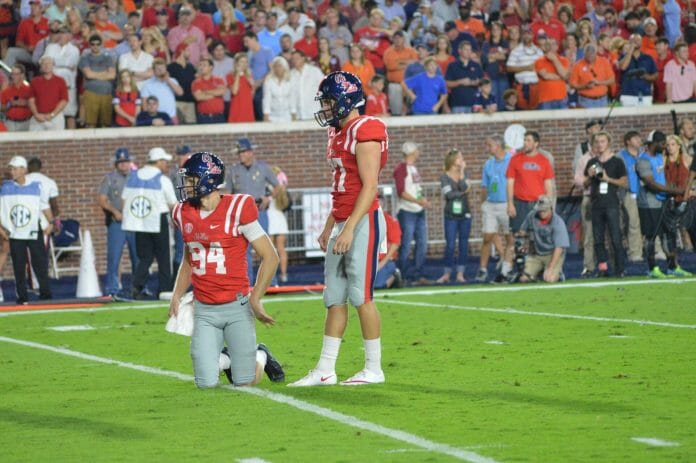 Gary Wunderlich delivered a win for the Ole Miss Rebels when he nailed the game-winning field goal against Texas A&M. And now the junior kicker/punter has won an award of his own.

Wunderlich was named a Lou Groza Star Award of the Week. Against the Aggies, Wunderlich made all three of his field goals and both of his extra points. On the season Wunderlich has converted on 19 of his 20 field goals.

This is the second time this season Wunderlich was named the Lou Groza Award Star of the Week.

Courtesy of Connor Riley to read the rest of this article go to SEC Country.com