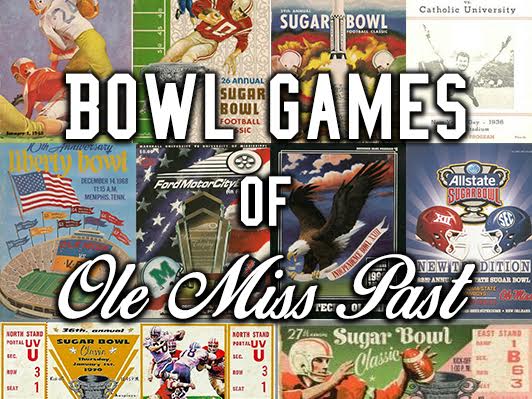 It had been six years since the Rebels last appeared in the Sugar Bowl. The 1964 Sugar Bowl ended with six lost fumbles and a 12-7 loss to the Alabama Crimson Tide led by Bear Bryant. With a guy named Archie Manning under center, the Rebels were back in the Big Easy for the 1970 Sugar Bowl. The Rebels faced the same opponent as their last Sugar Win, the Arkansas Razorbacks. The #3 ranked Razorbacks were favored over the #13 Rebels, who came into the game with a record of 7-3.

The games first score came by way of a 69-yard run by Ole Miss FB Bo Bowen. Arkansas drove down into Rebel territory attempting to even the game, but the drives stalled and a FG attempt missed its mark. After the defense held the Razorbacks, it took Manning and the offense just six plays to reach the end zone and extend their lead to 14-0. The Razorbacks got on the scoreboard in the second quarter with a TD, followed by a missed PAT, cutting the lead to 14-6. Another TD with two minutes reaming in the half finished the Razorbacks scoring for the first half. A 52-yard field goal for the Rebels and a 30-yard TD pass from Manning saw the Rebels put up 10 points in the second quarter. With a 24-12, the Rebels looked to be in a grove on offense that couldn’t be stopped, but the Razorback defense had other plans.

The Rebels won the game 27-22, marking their fourth upset of a top-10 team in the 1969 season. Sugar Bowl champions once again, Archie Manning was named MVP of the game. This was Johnny Vaught’s final Sugar Bowl Victory as the head coach of the Rebels. Vaught retired following a loss in the 1971 Gator Bowl. The Gator Bowl loss to Auburn was also Archie Manning’s final game in a Rebel uniform. After becoming a regular in the Sugar Bowl, Ole Miss would have to wait until 2015 for the chance to return to New Orleans and regain their former glory. The Rebels would get back in the bowl game win column in the 1971 Peach Bowl against Georgia Tech.

For video from the 1970 Sugar Bowl see below. Video courtesy of Ole Miss Football.