Rebels Come Home for Matchup with Texas A&M Tonight at 6:30 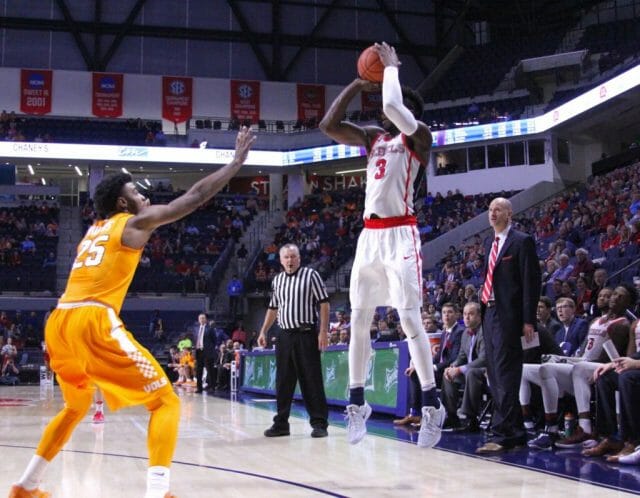 The Rebels have put their shaky performances against UGA and South Carolina to win two in a row in the SEC. Ole Miss can make it three in a row tonight at home against Texas A&M. Currently sitting at 3-4 in the SEC, a win tonight would put the Rebels back at .500 in the conference and in a position to make a late-season run at being a part of March Madness.
In the Rebels 75-71 win over Missouri, they continued to spread the ball around and present a balanced attack on the offense end. Sebastion Siaz’s 13th double-double of the season led the way with 19 points and 10 rebounds. Deandre Burnett returned after missing two games with an ankle injury and scored 14 points in his return. Terence Davis turned in his second straight double-double and looks to be developing into the player many knew he could be. After a breakout game against Tennessee, freshman Berlin Tyree scored just 6 points. Cullen Neal aged just 8 points in a reduced role, playing just 18 minutes.
It may sound like wishful thinking, but if the Rebels can fire on all cylinders, this offense would be hard to slow down. The Rebels turned the ball over just 11 times on Saturday, while forcing 15 Tiger turnovers. Holding that advantage in the turnover margin will be key for this young Rebel team, as they can’t afford many more losses along the way if they have postseason dreams.
The Aggies are 2-5 in the SEC and 10-8 overall, making this a winnable game for the Rebels. A matchup with #5 Baylor on Saturday looms large, so the Rebels can’t get caught looking ahead. Staying in the moment and focusing on the task at hand will go a long way in getting Ole Miss their third straight conference win. Texas A&M needs a win more than the Rebels do, so look for a motivated Aggies team to take the floor tonight. The Aggies score just over 72 PPG, but they do it efficiently, shooting 47 percent from the floor. Contesting every shot has to be a part of the defensive game plan to stop the Aggies from getting into a rhythm.
Tip-off at the Pavilion is set for 6:30 p.m. Joe Tessitore and Sean Farnham will have the call on ESPN2, and the Ole Miss Radio Network will feature David Kellum’s broadcast. WatchESPN.com and OleMissSports.com will carry the game as well.