Writing To Remember: An Author’s Depiction Of Her Mother’s Alzheimer's 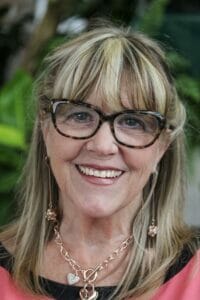 What began as a childhood passion for one Jackson native has now become a full-time second career, almost 60 years in the making.

Susan Cushman, author of the newly released memoir, “Tangles and Plaques: A Mother and Daughter Face Alzheimer’s,” began her writing profession at an age when most anticipate their approaching days of retirement. However, this unconventional journey is nothing new to Cushman, whose life itself has not followed the traditional path.
Marrying her senior sweetheart after her freshman year of college, Cushman left Ole Miss and followed her husband, Bill, to Jackson.
“He was going to Jackson to medical school; so I went to Belhaven [University],” Cushman said.
Entering this new stage of life, Cushman spent nearly the next three decades translating the adolescent love she possessed for writing into a new love, being a stay-at-home mom. It was not until 2001 that she acknowledged the possibility of writing reentering her life.
“I think it was 2001, around there, when my last child left for college, and I started pursuing second careers,” Cushman said. “First, I painted for a while, and then I started writing seriously.”
In 2007 as she became increasingly determined about writing, she began attending the Yoknapatawpha Summer Writers Workshop. She continued going every summer for the next six years.
She not only cultivated her craft during this time but also gave back to her communities by helping organize various writing conferences. In 2010, she co-directed the Oxford Creative Nonfiction Conference, and in 2011, she acted as director for the Memphis Creative Nonfiction Workshop.
“Since going to those kinds of conferences and workshops helped me get my start with writing, I felt like it was important to help others have those same opportunities,” Cushman said.
As her writing career began to take flight, Cushman created a blog in 2006 as a platform to both share her work and grow her audience. She never dreamed that 60 of these blog posts would culminate in her first book as a writer.
Serving as the autobiographical portrayal of a style she coins as the “new epistolary,” “Tangles and Plaques” is Cushman’s blog post depiction of the heartbreaking and bittersweet moments of a mother’s descent into Alzheimer’s disease and a daughter’s efforts to care for her.
“I had no idea that ‘Tangles and Plaques’ would end up being my first book because I didn’t know that it was going to be a book during all the years that I did the blog posts about my mom,” Cushman said. “It was just my life. I was just living my life and blogging about it.”
Neil White, fellow author and creative director and publisher of The Nautilus Publishing Company in Oxford, recognizes the difficulty of Cushman’s eight-and-a-half year journey with caregiving but applauds the bravery taken to write with such openness.
“Susan Cushman is not only an accomplished writer, but she tackles a brutal topic
with candor and honesty,” White said. “Madness awaits us all. I pray I can confront it with equal faith and vulnerability.”
Cushman finds inspiration from those books that express the good, bad and ugly of a situation and allow readers to feel like someone understands them. As she embarks on her book tour, making a stop at Off Square Books in Oxford on March 3 at 5 p.m., her one desire is that “Tangles and Plaques” is that book for people.
“I think a lot of people read self-help and memoir thinking they’re going to get fixed. Instead, I’m just looking for empathy and understanding and commonality, and I hope that’s what people will find in ‘Tangles and Plaques’ – empathy and commonality and compassion,” Cushman said.
With the release of her first book earlier this year, Cushman continues to hit her stride with the arrival of two more books this year and another next year. In March, her anthology entitled, “A Second Blooming: Becoming the Women We Are Meant to Be” will hit shelves while her first novel, “Cherry Bomb,” will be available this October. Next year, the release of her second anthology and fourth book, “So Y’all Think You Can Write: Southern Writers on Writing,” will see publication.
From her roles as wife, mother, grandmother, selfless caretaker and now, full-time writer, Cushman epitomizes the sentiment reflected at the end of each of her emails: “It takes courage to grow up and turn out to be who you really are.” – E.E. Cummings 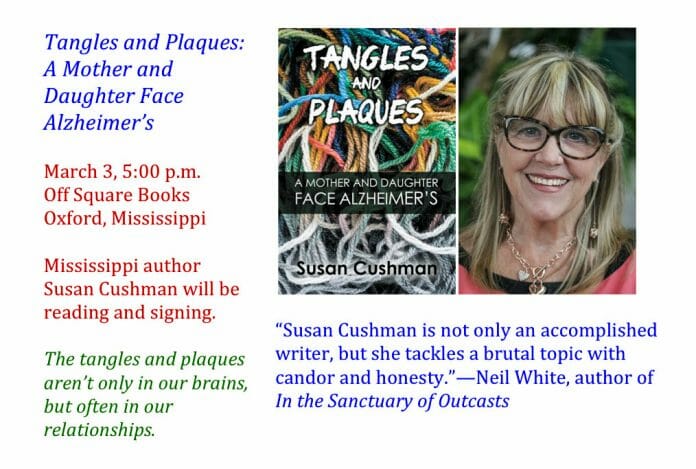 Blurbs for Tangles and Plaques: A Mother and Daughter Face Alzheimer’s
Susan Cushman is not only an accomplished writer, but she tackles a brutal topic with candor and honesty. Madness awaits us all. I pray I can confront it with equal faith and vulnerability.—Neil White, author of “In the Sanctuary of Outcasts.”
Cushman has written a new kind of love story, one that speaks to the very real concerns of a generation. In this true story of a daughter’s love for her aging mother within the daily trials of caregiving, we read ourselves, our families, and the ways that our losses shape who we become and how we choose to remember.—Jessica Handler, author of “Invisible Sisters: A Memoir,” and “Braving the Fire: A Guide to Writing About Grief and Loss.”
Susan Cushman writes with clarity and grace about the gnarled pathways between her and her mother, and about the terrible disease that holds a surprising grace within its irrevocable sadness. Tangles and Plaques has the courage to see it all. This is a memoir about caretaking and taking care. It’s a book that will touch your heart. —Lee Martin, author of “From Our House” and “Such a Life.”
An honest, open account of the personal challenges, wrenching heartaches, spiritual questions, and practical concerns one faces in caring at a distance for a loved one with Alzheimer’s. Cushman provides intimate, detailed descriptions of her constant doubts, emotional upheavals, hard decisions, and frustrating encounters with professional caregivers during the decade of the unrelenting progression of her mother’s mental and physical deterioration. — Sally Palmer Thomason, author of “The Living Spirit of the Crone: Turning Aging Inside Out,” “The Topaz Brooch,” and “Delta Rainbow-the Irrepressible Betty Bobo Pearson.”
Susan Cushman writes a profoundly personal and honest portrait of her eight-year journey with her mother suffering from Alzheimer’s. She brings her talent for story, scene, and character to bear in the unfolding of real-time moments that show disease progression and the ensuing softening in a challenged relationship. Cushman sees and feels things deeply and finds in each encounter a nugget of wisdom that fortifies her with focus, peace, and faith. Her stories give inspiration and insight to others who face this journey. — Kathy Rhodes, author of “Remember the Dragonflies: A Memoir of Grief and Healing”
Tangles and Plaques is a beautiful and moving memoir and one that chronicles the journey of Alzheimer’s. Through the tangles and plaques associated with the disease, however, Cushman finds a way to heal and set her sight on the good. Readers, too, get a lesson in how to live better.—Niles Reddick, Vice Provost, The University of Memphis-Lambuth, and author of “Drifting Too Far from the Shore.”

By Gracie Snyder, an intern for HottyToddy.com. She can be reached at jgsnyder@go.olemiss.edu.
For questions or comments, email hottytoddynews@gmail.com.

Facebook
Twitter
Pinterest
Previous article‘Living Out Loud With Alley And Amanda’ Podcast: IF Oxford Recap
Next articleWildrose Kennels To Host One For The Ladies: 'Dames, Dogs And Ducks'