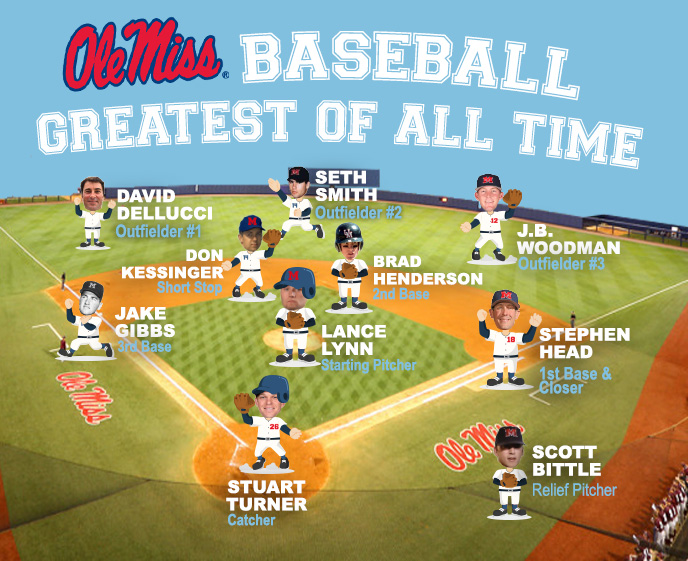 So what do we have to say about the fans choices?

Steven: Jake Gibbs was a no brainer at 3B. A great infielder and an even better hitter, Gibbs cemented his Ole Miss legacy with an outstanding career. With a career .384 average, Gibbs lead the Rebels to their first SEC Championship in 1959. Fans can disagree on other aspects of this list, but Gibbs isn’t one of them. Kessinger at SS was as sure-handed as they come, and his talents were on full display at Ole Miss before he became a 2x gold glove winner in the major leagues. While I chose Alex Yarbrough for my 2B, I can see why fans decided to put the four-year Rebel in this list, as his name is a constant in the record books, residing in the top 10 of numerous categories. At first base, I went with Sikes Orvis since I knew Stephen Head would be my closer, but you can’t argue with including Head as one of the best hitters and fielders in Rebel history.
Adam: One of the greatest infielders from this selection out of this group with Stephen Head, Brad Henderson, Jake Gibbs and Don Kessinger. All four of these guys played a vital role in Rebel uniforms. This all-star team would make it difficult for opponents to get a ball out of the infield.
Nick: The Greatest of All Time Ole Miss infield has one glaring upset. Brad Henderson crept onto the list beating out Alex Yarbrough, who three out of the four HottyToddy writers picked. I being the sole writer choosing Henderson celebrate in his victory as his numbers at Ole Miss support him being on the list. Also on the list, you see two original studs in Gibbs and Kessinger, who may be the biggest two names that have come from Ole Miss Baseball. Stephen Head does deserve to be on the list here but first base may not be the place. However, give your respect where it is due as Head goes down as the greatest first baseman of all time.
Cole: Wow. The greatest of all time, voted on by you, and the infield looks pretty stacked. At third base, there is the great Jake Gibbs. At shortstop, there is a household name in Don Kessinger. At second base, we have Brad Henderson. Finally, first base features, in my opinion, the greatest Rebel to ever step foot on the diamond: Stephen Head. The big upset for this voting is Brad Henderson edging out Rebel great Alex Yarbrough. Three of the four writers in this series picked Yarbs, including myself. Although I do think that Yarbrough deserved to be on this list, there is one thing that cannot be argued: no team would want to face off against this infield.

Steven: David Dellucci was a consensus among our writer and how could anyone disagree? The fans agree that Dellucci’s  All-American performance in 1995 and his induction into the Ole Miss Hall of Fame earned him a spot in the greatest outfield of all time. Seth Smith racked up the hits and the accolades as a Rebel becoming the SEC Freshman of the year in 2003 finishing with a .402 average. Smith played every spot in the outfield during his career, and his versatility was one of his many strengths. For the #3 spot in the outfield, I went with two-time All-American Paul Husband, but he didn’t make the fans’ cut. While I may disagree with the choice, J.B Woodman certainly earned his spot on this list. There’s nothing better than watching a play at the plate, and Woodman threw out 7 runners at home during his senior year.
Adam: Speed and power is what comes to mind when one thinks of an outfielder. Over the years, there have been some very good ones to dawn an Ole Miss uni. No matter where a ball was hit, all three guys in this group would give it a run down for an out. At the plate, if Ole Miss fans were in search of a home run David Delloucci, Seth Smith and J.B. Woodman could deliver a bomb at any time during the at-bat.
Nick: The Greatest of All Time outfield is consistent across the board. Dellucci is hands down the greatest outfielder to play for Ole Miss and was deemed that when every HottyToddy.com writer included him. Seth Smith is deserving to be on this list, even though he beat out some All-Americans such as Paul Husband. J.B. Woodman, who I selected as my All Time Center Fielder, I think may have shocked other HottyToddy.com writers, but Ole Miss fans know the recent impact that Woodman had on our program.
Cole: When I first saw the results to this voting, I was a little shocked that Bousfield did not make the list. All he did was lead us to an appearance in Omaha, after all. However, when I actually read the three guys who made the list, it was hard to argue. Dellucci was picked by all four of our writers, so he was a no-brainer. The other two spots were up for grabs, and Smith and Woodman were able to lock them down.