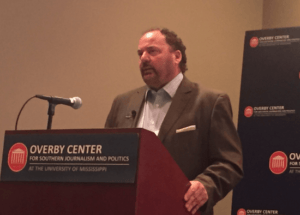 Tuesday kicked off day two of the ACT 7 Experience at the University of Mississippi.
According to the Meek School of Journalism and New Media website, ACT (amplify, clarify, testify) speakers will discuss three significant themes in print journalism: magazine launches, reach/power and the future of distribution in a digitally dominated age. This year’s overarching theme is “Magazines Matter, Print Matters.”
The second day featured talks about profitability in the marketplace, and speakers discussed the importance of adding value to a brand before selling it and creating the leaders to make it all happen.
The former CEO of Cygnus Business and co-founder of French LLC, John French, spoke before an audience of industry leaders, students and faculty as part of the seventh annual ACT Conference.
French says his career consists of going into a company to see what isn’t working and what needs to be changed or fixed to make it more valuable to investors or potential buyers.
“If this is dressing up a business to be sold, I’m the fashion designer,” French said. “To make the magic that affects media, you need to meet the top line.”

French says that the most important thing you can do in any business to increase profitability is to question everything.
He says businesses start doing poorly because they get in a rut of doing the same things the same way, and he encourages emerging leaders to ask their peers, “Why do we do that?” as much as possible.
French also says we’re now in a “Golden Era” for the media with success centered on understanding or making money on data. He says a critical part of being successful in the business is making sure that you have the best person possible managing your data because it is the foundation on which a business lives.

“Hydrate and never give up.” -John French #MICACT7

Along with being on top of data, French encourages students to stay up to date with the digital age and technology as this largely influences print today.
“If you’re going to be a leader today, don’t take that old CEO approach,” French said. “If you don’t speak the language, people won’t listen. Drink the water. Understand what’s going on in the industry and never give up.”

Facebook
Twitter
Pinterest
Previous articleMay The Force Be With You At Off Square Books' Star Wars Night
Next articleOle Miss Softball Set To Host Jacksonville State At 4 P.M.