The event, which was designed to inspire ideas and interest around STEM programs and technology around the state, featured an immersive tech experience throughout the day where participants were able to engage in Virtual Reality among many other tech demonstrations.

Later in the afternoon, three featured speakers took the Pavilion stage. AI expert Brian Uzzi led the CTX talks with his topic, “Man + Machine is Greater than Man or Machine.”

Uzzi spoke of the advancements AI can provide in diagnosing medical data, statistics to improve crime rates and how to grow businesses through machine learning.
“What we need to see is… you don’t want to think you’re in competition with the machine. The real insight is really you in collaboration with the machine. If you do that, I think you’ll see it’ll be able to build you up and get you the things you want and potentially raise the whole human race,” Uzzi said.
Uzzi mentioned how machines learn just as a human would but drew a comparison to how much quicker the machine can pick things up and process them. IBM’s AI system “Watson” was brought up with a comparison between it and the human brain. Watson was developed in four years and was able to defeat the best Jeopardy contestant of all time. Since then, it has advanced even further while shrinking from the size of 10 refrigerators down to the size of three stacked pizza boxes. In such a short amount of time, Watson has been able to accomplish things the human brain hasn’t in millions of years of evolution according to Uzzi.
Uzzi said that the partnership between the things that humans do well and the things machines do well could change the world. With machines catching things humans miss, and humans capitalizing on this increased amount of data and information, it could lead to a new way of thinking and creating new innovations.

Next to take the stage was CEO of Zuckerberg Media and former Facebook CMO, Randi Zuckerberg with “Social Media is Free, Like a Puppy is Free.”

Zuckerberg is an entrepreneur, investor, author and media personality. As an early employee at Facebook, she led major marketing initiatives in the company’s formative years, helped launch the live streaming video industry, and was nominated for an Emmy Award in 2011 for her innovative coverage of the midterm elections, combining television and social media. She helped create Facebook Live, which is now used by more than a billion people around the globe. After leaving Facebook, she launched Zuckerberg Media with the mission of creating media content that puts intelligent, tech-savvy, entrepreneurial women and girls at the forefront.
Zuckerberg graduated from Harvard and then moved to New York. At the age of 23, her brother, Mark Zuckerberg, asked her to help with a new company he was trying to get off the ground.
“I was 23 living in New York, and I thought I’m not going to work for my brother’s little company,” Zuckerberg said.
However, her brother offered her a plane ticket and off to California she went. She told her brother she would only be there for six months. But, 10 years later she still resides in California with her two children.

Zuckerberg talked about the early days of Facebook and what made this business launch exclusive. The team received letters of fans begging them to bring Facebook to their schools. What also set Facebook apart was verifying and forcing people to use their real names, whereas before there was no accountability online and people could hide behind the screen.
Zuckerberg later spoke about Facebook’s Hack-A-Thon events, in which employees were given 12 hours to work on something totally different, a passion project that they’d never had time to work on before. The challenge created an atmosphere of ideas, where there was no “stupid or too crazy of an idea.” Surprisingly, the staff found that the people who came up with some of the best ideas weren’t high up in the company, but rather interns or lower-level employees.
Zuckerberg herself participated in the Hack-A-Thon, and believe it or not, her idea was Facebook live. She said she never saw herself as an entrepreneur, but “when you put yourself in the right environment, you can do anything.”

While she loved Silicon Valley, she didn’t like that she was the only woman. When she would go to staff meetings, she would ask where the women’s bathroom was, but no one could tell her because they had never had a woman in the office. Her mission then became to encourage more women to engage in technology.
To end her talk, Zuckerberg left the crowd with a song, boasting her broadway talent, something Harvard once rejected. 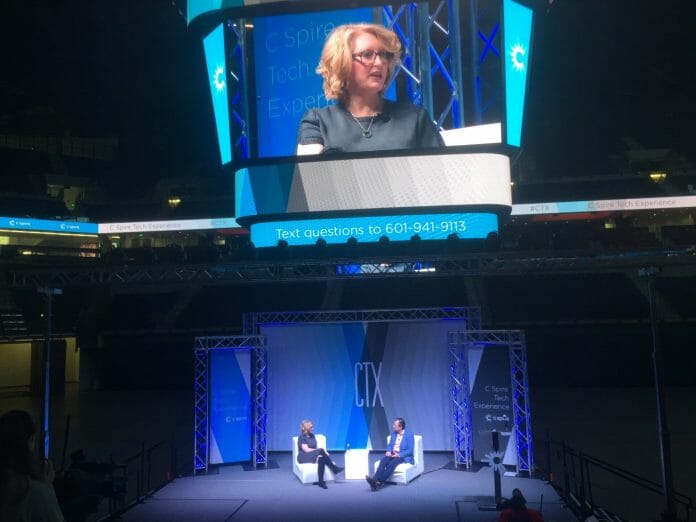 McKenna-Doyle is Senior Vice President and CIO of the National Football League. She is responsible for the NFL’s technology strategy, shared service delivery and management of the league’s corporate technology activities. She has been at the league since 2012. She is executive sponsor of the league’s WIN – Women’s Network, and was recently awarded a Game Changer Award by Sports Business Journal. In 2013 Forty Over Forty – Women to Watch named her as one of the top 40 women in business.

McKenna-Doyle opened her talk with an inspiring video of this past NFL season before explaining the impact the league has played on its fans.
“With a game this meaningful, you’re never alone,” she said. “Football not only lives at the center of real families, it creates them wherever it goes.”
Mckenna-Doyle spent nearly 15 years in the finance division of the Walt Disney Company before joining the NFL. She began her work with Walt Disney in 1999 at a time the internet really began to take off.
But she wanted something more, something meaningful. She told her friend that she wanted to change the world.
“I wanted energy, healthcare, education,” she said.
And so she moved to Baltimore and launched a constellation competitive energy business, Exelon. But even then, she was bored.
“I have always been a football fan,” she said. “I thought I would never really have a shot in the NFL. You have to sell yourself.”
McKenna-Doyle then indulged in discussion surrounding the NFL and technology advancements within the business.
“The game is changed massively, not just because the core and heart but is much more connected now,” she said. “In the last few years, we have centralized instant replay.”
She went on to say that NFL players now have chips in their pads which measures data, and that the league offers a $60 million grant to institutions who provide ideas to make the game safer. She also provided demographics of NFL viewers, noting that Hispanics and women are becoming more interested in the NFL.
McKenna-Doyle said the NFL always strives to become more mobile, and next year, games can be streamed live on Amazon.

CTX wraps up the series of events tonight with a concert at the Lyric featuring Passion Pit, The Weeks and The Lonely Biscuits. Tune in with HottyToddy.com tomorrow morning for the full wrap of tonight’s concert.