April 27, 2017
0
347
Quick Note: Due to expected rain in Fayetteville, the teams will play a doubleheader on Friday beginning at 12 p.m. CT. Game two will begin 40 minutes following the conclusion of the first game.

Another weekend and another top 15 opponent for the Ole Miss baseball team. This time they travel to Fayetteville for a three-game series with the #10 Arkansas Razorbacks. Less than a month remains in the regular season, and time is running out for things to gel on both offense and defense for this inconsistent Rebel squad.
After a solid offensive series against Missouri, the Rebels left 12 runners on base in Tuesday’s battle for the Governor’s Cup and were only able to get two runs across in the losing effort. You don’t get any runs for getting guys on base, you’ve got to be able to come up with timely hits and get runners home. Rarely do you see a team leave that many runners on base and come out on top, and that’s where the Rebels must improve this weekend, among other areas.
Still a bottom dweller in the SEC in terms of offense, Ole Miss has hope this weekend thanks to a group who has proved itself against the Razorbacks in 2016. While the freshmen work to find their swings, it’s up to the older guys to take charge and that’s what Tate Blackman, Colby Bortles, Will Golsan and Ryan Olenek need to do this weekend. Last year against Arkansas, the four players impressed all hitting over .330 and combined for 13 RBIs in the three-game series.
Ole Miss’ rotation has been stellar throughout the season and will have to be this weekend against an Arkansas team which ranks second in the SEC with a .296 team average. The good news for the Rebel pitching staff is that Bret Rooker does play for the Razorbacks. State’s slugger burned the Rebels once again on Tuesday for a 3-run home run. The bad news is Arkansas leads the SEC with 54 home runs, so the long ball could be a deciding factor in this weekend’s matchup if the Rebel pitchers aren’t careful with their control.

Game Time – Where To Watch/Listen
Tonight’s game will begin at 6 p.m. from Baum Stadium and can be seen on the SEC Network and heard on the Ole Miss Radio Network and OleMissSports.com.
Both Friday games will now be broadcast only on SECN+ and the Watch ESPN app. 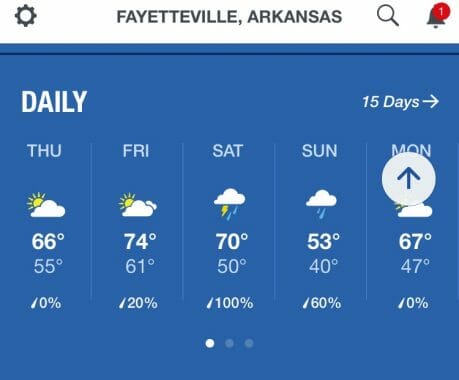 As noted at the top, inclement weather has already impacted the series, but with the double header tomorrow, the series should be clear of any further changes.