August 18, 2017
0
591
The Sally McDonnell Barksdale Honors College will open its first art exhibit of this school year, this upcoming Tuesday, which features a unique installation from Oxford native Laura Elkins. Titled “America Selfie,” Elkins describes the piece as a contemporary take on history painting.
“It’s more psycho-sexual history of America. It’s a portrait of America now, and our society,” Elkins said. “I can’t think of a better word to use than zeitgeist because it shows the times that we are living in.”
As a strong voice for women, Elkins has incorporated female struggles into her award-winning work over the years. Elkins received a grant-funded by the National Endowment for the Arts, The Rockefeller Foundation and The Andy Warhol Foundation for the Visual Arts in 1993 to create “Why There Are No Great Women Artists: The Children’s Room” that translated her series of paintings, “The Birth of Housework” into architecture. Elkins attended the Women’s March the day after the Presidential Inauguration in January and images inspired by attendees can be seen in her “America Selfie” exhibit. 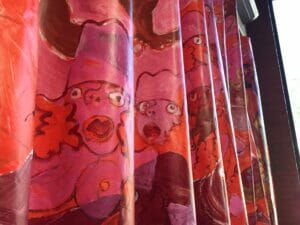 As a Washington D.C. resident since 2000, Elkins has created works surrounding hot-button issues in America, such as the surveillance of citizens after 9/11, the minimum wage debate and more. Elkins has her point of view and wants others to form their own opinions after looking at her work.
“Art is an exploration, and how I feel about certain things,” Elkins said. “It gives us a focus for discussion. If people love it or hate it, I don’t’ care. I do think that it’s a way to talk about things. Whether you agree with my point of view or not, I hope that the aesthetics of the painting bring something out of each person.”
After a 6-month painting process, preceded by countless sketches and brainstorming sessions, “America Selfie” now drapes down from the walls of the Honors College. With a curtain-like design, Elkins encourages viewers to look at the painting from multiple angles.
“You almost have to move around and look at the painting from different angles, which I feel represents how you hear different sides of a story depending on where you look,” Elkins said.
Douglass Sullivan-González, dean of the Honors College, had long been a fan of Elkins’ work and describes the choice to feature her work in the newly renovated space as “serendipitous,” as she agreed to do so while in town for the “From the Edge of Inside” event at the Honors College last year.
“Our goal is to build the kind of community that is open to new questions and art,” Sullivan-González said. “The fundamental question is ‘who are we as a community’ and ‘where we are going?’, Sullivan-Gonzàlez said. “Laura has always had these evocative sketches that pull out these questions, so naturally we turned to her.”

Elkins grew up in Oxford and remembers taking art classes around town and on campus. While the town has grown since she left for D.C, Elkins retains her affection for her childhood home where she was mentored by noted Lafayette count native artist, Theora Hamblett, whose work was featured in the Met Gallery in the 1950’s. Elkins later
shared Hamblett’s patronage by the renowned New York art dealer Betty Parsons, who
exhibited Elkins’s work in 1980.
The exhibit will be officially unveiled on August 22 at 3 p.m. during an opening reception, for which Elkins will be present and which is open to the public. The exhibit will remain on display in the Great Room of the Sally McDonnell Barksdale Honors College through September 29. “America Selfie” will also be included in the YAC Art Crawls from 6 p.m.- 8 p.m. on August 22, and September 26.

Steven Gagliano is the managing editor of HottyToddy.com. He can be reached at steven.gagliano@hottytoddy.com.