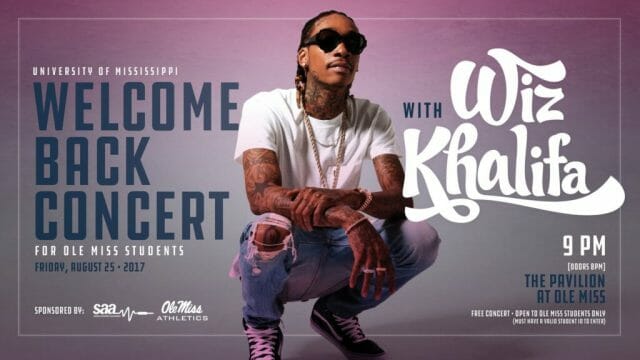 Last week, the Ole Miss’ Student Activities Association announced that Wiz Khalifa would be headlining the annual “Welcome Back” concert for students inside the Pavilion on August 25. Since the announcement, members of the Ole Miss community have expressed their opinions with the rapper coming to campus.
It’s only fitting that a discussion of controversial music takes place 45 minutes away from the birthplace of perhaps the most talked-about musician of all time, Elvis Presley. The icon was as polarizing as he was popular, and similar controversy swirled around his music. The rise of Madonna and the advent of hip-hop were no different, and the generational gap appears to be alive and well surrounding the SAA’s choice of Khalifa to headline this concert.
Some believe that having the Pavilion host the event is disrespectful to the other events held there, and others see Khalifa’s brand as a negative reflection of the University’s message to its students.
“In the Pavilion, we have had many great events unite the campus and city of Oxford. We have had speakers like Tilman Fertitta, we held a vigil for Ty Laporte that brought students, athletes, and coaches together, we have sporting events, and last, but not least, we have Commencement in the Pavilion,” George Preston, class of 2016, said. “Receiving the highest honor of the University takes place in this building. The recurring theme in the Pavilion is togetherness. The University and City of Oxford come together in the Pavilion and uphold the University Creed.”
“As a 2001 graduate (summa cum laude), and member/supporter of the Ole Miss Real Estate Advisory Board, I am ashamed that the administration would invite and allow someone such as ‘Wiz Khalifa’ on campus as a ‘welcome back concert’ for the students,” Breck Hines said. “He celebrates the ‘gangsta’ ideology which has not one redeeming quality in today’s society. I’m not sure there is a ten-second span in one of his songs where hardcore profanity is not used. Is this what you would want your daughters going to as a ‘Welcome Back Students’ event?”
While alumni may not approve of the artist, Brady Ruffin, director of the Ole Miss Student Activities Association noted that they serve the student body and that the reaction from their constituents has been positive.
“As a body of diverse students from every part of the Ole Miss family, we take very seriously our duty to represent the student body,” Ruffin said. “Wiz Khalifa was the preferred artist by an overwhelming majority of the council. The Executive Council felt that the artist appealed to many of our students and our feedback thus far has been extremely positive from our constituents.”
Director of the Ole Miss Student Union, Bradley Baker, mentioned that students can make a choice to either attend or not, and that Khalifa’s appearance isn’t reflective of the Ole Miss administration’s values.
“As with all SAA-sponsored events, it is important to note that these activities are optional and only students who choose to attend will be there. The Student Activities Association Executive Council selected Khalifa based on interest by the broader student body and is aware that the program content is not an expression of institutional values,” Baker said.
While some are upset with Khalifa coming to campus, it’s a student-only concert, and students are excited for the popular artist to grace the stage at the Pavilion.
“What better way to open the school year than with a concert from one of the country’s most popular artists? If people think most college kids aren’t listening to this kind of music anyway then they are mistaken,” said senior Dakota Kerns. “If you don’t want to listen to it, don’t go to the concert.”
“The concert is pure ENTERTAINMENT. He will not be delivering a keynote, a presentation, a debate, nor any other form of informing people of his true values and/or imposing his beliefs onto students,” English major, Carl Tart said. “We have an outstanding SAA team this year, and I know for sure that they will make sure that this is a safe, welcoming and inclusive environment for all.”
The concert is set for 7:30 on Friday, August 25. Tickets will be uploaded to students’ IDs.

Steven Gagliano is the managing editor of HottyToddy.com. He can be reached at steven.gagliano@hottytoddy.com.