Delta Magazine: Charles Herring – Painting the Past for Future Generations

By Susan Marquez. Photography by Rory Doyle. This story was originally published in Delta Magazine.

From the sides of vans and 18-wheelers, to the sides of grain bins and churches, to campaign signs and even the lettering on the famous sign for Po’ Monkey’s Lounge, folks in the Delta have probably seen the work of artist Charles Herring. 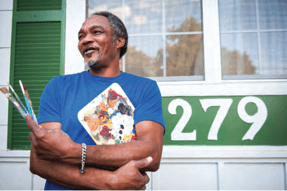 While he does a lot of work for a lot of people, Herring says his real passion is paining people and scenes of the Delta. “My motto is ‘painting the past for future generations.’” Born in Winona, Herring moved with his family to the Schlater area. “I went to school there and in Greenwood,” he says. After graduating high school, Herring went to college in Holly Springs where he studied business administration.

“I realized after I graduated that I wasn’t cut out for an office job. I worked in a factory for a minute and didn’t really like that work, so I got a job with the State Penitentiary, where I thought I’d work a few years then move on to something else.”
At that time, Herring moved to Drew to be close to work. He recently retired from the penitentiary after working there “29.75 years.” All the while, he painted everything he could, perfecting his technique and growing as an artist.

“I never had an art class in my life,” Herring says. “I’ve been drawing and painting since I was seven years old, and, fortunately, I had teachers who recognized my talent and encouraged me.”

Herring says his teachers entered his work in contests, and he always won. “They eventually had me help other children with their art work, which later led me to working with the Delta Arts Alliance.”
Through that organization, Herring works with children all over the Delta, teaching them art and encouraging them to explore their inner talents.
“I never had children of my own, and I love working with children. They really respect me and appreciate the time I spend helping them develop their abilities.”
A loner by nature, Herring says he has always enjoyed being by himself. “I loved my job at the penitentiary, where I transported sixty-five inmates to job sites all over Sunflower County. I met some of the most gifted people there. I saw their artwork and began talking to them, asking them about how they did their shading and such. That really enhanced my own work.”
As much as he loved his job, he liked going home to be by himself. He married for the first time at the age of thirty-five, but according to Herring, “the ink wasn’t dry on the marriage license before that relationship ended.” He recently married again and is content with his life.
“Even though I’m retired, I still get up at five or five thirty, and I start painting early. I paint about six or seven hours a day, sometimes completing five or six paintings a day. “Each painting speaks to me, and it tells me when it’s done.” 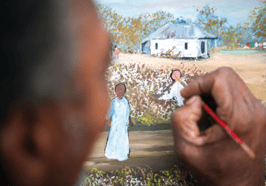 Herring’s talent comes from both of his parents. “My father was a whittler, and my mother was a seamstress. She could make anything she wanted to, especially quilts. She and my grandmother made exceptional quilts.” He was also encouraged in college by a pen pal he never met. “We had a project where we wrote to people in other states. I wrote often to a lady I regret I never met. She would send canvases to me in the mail, so I never had to buy them. I have always regretted losing touch with her because I’d love to tell her now how much I appreciated her doing that.”
His favorite painter is Norman Rockwell.
“I am a big fan of his work,” Herring says. “His characters are really something. Their expressions and movements are just wonderful. And I love his color palette. I study his work, and I pattern my characters after his.” Herring has painted all of the famous Delta blues singers, including doing five pencil sketches of B.B. King the day he passed away. “Not many people have seen those.”
Herring works primarily in acrylic, his favorite medium because it dries quickly, and watercolor.
“I have tried painting with oils because they give the best colors, really earth-like colors, but I have never developed a technique for getting the paint to dry faster.”


Herring’s work has been shown at the B.B. King Museum and is now part of the art collections of people as far away as New York and New Jersey.
“I had a show at Delta State, too, and that was such a big honor for me.”
Most of Herring’s work is sold at the many festivals around the Delta, and he has recently purchased a trailer to have a rolling art gallery. He makes his own frames, mostly out of cypress.
“I like to work with wood. I went to a vo-tech high school, and I’ve learned skills such as offset printing, shoe repair and carpentry work, so that’s helped me with my art.”
Painting is a passion for Herring, and he says he credits his teachers and others who have encouraged him through the years. 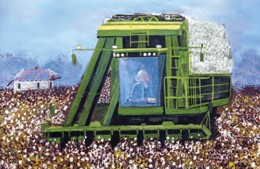 “I had some really tough teachers in school, but now I’m grateful for that. They helped mold me into the person I am today.”

For questions or comments email hottytoddynews@gmail.com.