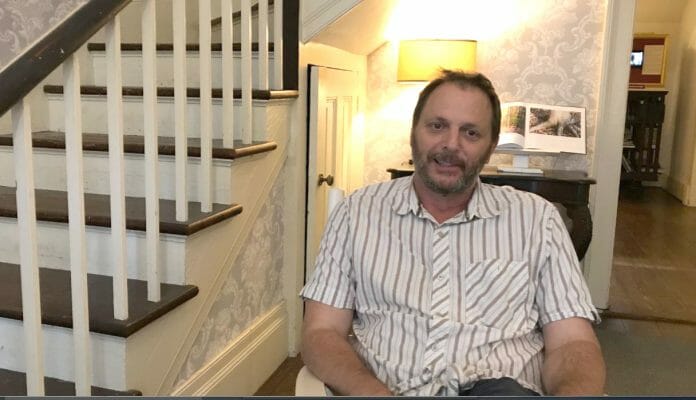 William Faulkner’s biggest impact on Oxford was setting the town as the scene of his most famous novels. Thousands come from all over the United States each year to tour Rowan Oak, the author’s Oxford home.

“Faulkner put Oxford on the literary map,” said Rowan Oak curator William Griffith, who believes Faulkner is remembered for two important reasons.
“One is his unique writing style,” Griffith said. “The second is that he was the first writer in the United States to set a modern novel in the South. He wrote about what was happening at that very second.”
Griffith, who celebrates 20 years at Rowan Oak this year, will greet you at the door of the home. A native of East Central, Illinois, Griffith said he “came to Ole Miss after graduate school, took a job at Ole Miss, then married a Southern lady. I didn’t know you couldn’t leave after that.”
Griffith attended college in southern Illinois, then participated in museum training in southern Canada and Arizona. With a major in archaeology and historic preservation, he enjoys studying the past.
“Being a curator at a literary figure’s house, you would expect for me to be more of an expert in literature or English, but learning historic preservation, none of that matters,” he said. “Being a lover of literature, it does help you enjoy the job a lot more.”


Co-worker Madeline Krema said, “Griffith is a wonderful curator with a warm and friendly personality.”
“He does everything for Rowan Oak,” she said. “From yard work to maintaining the house’s integrity, he is always putting up new exhibits to keep things interesting. He tries to portray a different type of Faulkner.”
Griffith concluded the interview with a few words from Faulkner’s Nobel Prize Speech. “In order to make your literature last, it has to be about things that travel time and are always relevant,” he said. “The things that are worth writing about are those things that we cannot explain and never go out of style – love, honor, pity, pride, and compassion. He was one of the greatest authors ever to live.”

By Juliette St. Romain
Read more stories like this on Oxford Stories.
For questions or comments, email hottytoddynews@gmail.com.