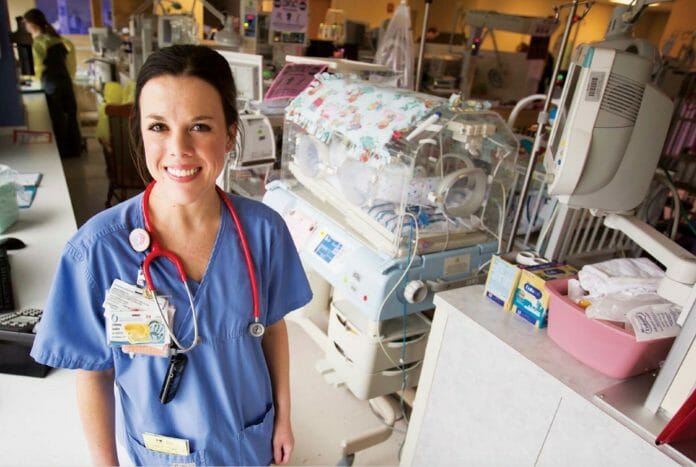 This story was reprinted with permission of the Ole Miss Alumni Review.

Brittany Boolos (BSN 15) was in the hospital for two months, unable to talk, walk or feed herself. Decades later, she turned that situation into a defining moment.

“I was born at 27 weeks … three months early,” Boolos says. “I spent two months in the Neonatal Intensive Care Unit. My passion for neonatal nursing was rooted in that. I tried to give every (career) a fair shot, but I wanted to give back for the care I got.”
The care Boolos received as a newborn helped give her a start with very few of the complications that premature babies typically encounter. Now as a registered nurse in the Neonatal Intensive Care Unit (NICU) at Wiser Hospital for Women and Infants at the University of Mississippi Medical Center, Boolos can name those common preemie complications from both work experience and her education foundation.


Preemies often have a low birth weight, and many suffer respiratory problems due to underdeveloped lungs. Sometimes they struggle with feeding issues. To help both preemies and full-term babies in a NICU, daily teamwork takes place at facilities throughout the country. Doctors, registered nurses, nurse practitioners, residents and a host of other hospital staff members must come up with care plans.

That big team is a far cry from the years when NICUs were in their infancy. Until the mid-to-late ’70s, an established blueprint for specific preemie care did not exist. The full development of neonatology as a specialty was still years away.
Texas Children’s Hospital in Houston was the rst hospital to treat pediatric respiratory failure with home mechanical ventilation. That development enabled at-home treatment instead of prolonged hospital care. The beginning of neonatology service followed.
“Back then is not that far back,” says Dr. Michael Speer, a neonatologist at Texas Children’s Hospital and a professor of pediatrics and medical ethics at Baylor College of Medicine. “The modern neonatology program was not established until about 1973. We didn’t have a ventilator for babies with lung disease until 1972. If a baby had lung disease, we had to use an incubator, and we didn’t have a ventilator to breathe for the baby.”
Some high-profile cases highlighted preemie health care needs, which contributed to care advances on a large scale. President John F. Kennedy’s son Patrick, who had been born premature, died in August 1963, just a few months before his father was assassinated. Patrick’s death put a spotlight on respiratory distress syndrome and other conditions common among premature babies. That spectrum includes babies born many weeks early and those who are nearly carried full term.
“The death of JFK’s baby Patrick … that baby was only about five weeks premature,” says Annie Rohan, an assistant professor and director of pediatric research at Stony Brook University’s School of Nursing in Stony Brook, New York. “There wasn’t a specialty of neonatology at that time. We learned that the use of oxygen is not always a good thing. (Musician) Stevie Wonder was exposed to too much oxygen.”
As funding for research and development increased, doctors gradually gained ground in the effort to improve preemie outcomes. The late Dr. Mary Ellen Avery’s pioneering research found that preemies often struggled with breathing due to lacking a lung protein called surfactant. Being able to supply that artificially in a NICU setting became a huge step forward. Other vital tools came into play as facilities were able to devote additional resources to address the nutritional needs of preemies.
“We had no formulas on hand in the early ’70s designed for premature babies,” Speer says. “We had no breast milk banking. We had primitive forms of nutrition [programs]. The mid-’70s was a hotbed of innovation and acquisition of knowledge.”


While doctors and nurses were making progress, another group still had plenty of catching up to do to become familiar with a typical NICU setting: the parents who were anxiously waiting to hear good news about their respective sons and daughters. Boolos has experienced the environment as a patient and as a nurse. She knows the visual aspects and the sounds of the NICU can be jarring for many new parents.
“One of the big things for me is to help the parents,” Boolos says. “For a lot of them, this is their first child. It can be very scary for them. There are a lot of cords and alarms in the NICU. Then teaching them how to care for a preemie — everything is so different.”
Boolos says her own parents, Todd and Tammy, were in that sort of situation when she was born in Vicksburg. The absence of a local NICU meant that 2-pound, 7-ounce Brittany had to be transferred to Methodist Medical Center in Jackson (now Merit Health Central).
“I always ask my parents questions about that NICU,” Boolos says. “My parents had hardly known about the NICU. Every baby is different. Babies of the same gestational age can have two totally different journeys.”
Prior cases and pattern recognition give doctors tools to recognize the illness process and the rigid science behind it. Sometimes the journey does not end as every patient and parent wants. Often, complications occur, and short-or long-term mental or physical impairments are possibilities.
“We have some babies who have medical conditions that we can address but not cure,” Speer says. “We sometimes are not able to do wondrous things.”
Sometimes the outcome is death.
“It is very gratifying to have the medical tools that we have,” Speer says. “But just because we can do something does not mean that we always should do something. Sometimes the best medicine is to say we cannot do anything for the baby, and we have to allow the baby to die with dignity and without suffering.”
Boolos witnesses many of the ups and downs experienced by babies and parents. Her reward often comes from seeing a baby that “you don’t think will make it through the night” hang in there and move closer to survival. When a patient is able to do things like switch to bottle feeding or start wearing clothes, those moments may not seem like a big deal on the surface. However, they are major milestones for preemies.
“It’s all part of it when you work in the NICU,” Boolos says. “It’s hard to see them fight for their lives. When you see their parents, it’s one of the hardest things.”


It is difficult logistically for organizations such as the National Association of Neonatal Nurses to track an exact figure representing the number of preemies who grow up to become medical professionals who work in a NICU. Rohan at Stony Brook estimates hundreds if not thousands of people have made that transition from being a patient to becoming a care provider.
“People have choices when they get out of a general nursing program,” Rohan says. “If you have emotional connections to that environment … preemies who have listened to stories about the NICU go into it.”
Once that decision is made, the process of getting accustomed to the ins and outs of a NICU begins. Students who are exposed to the new environment face linguistic challenges.
“There is a lot of new language at the NICU, and getting around the language is tricky,” Rohan says. “Sometimes younger students could be intimidated by the skills of a neonatal nurse practitioner, and they are challenged by the conversations. Sometimes the news is not interpreted by a family the way you want it to be.”
Preemies make up a fairly large portion of a NICU patient population, but many other full-term babies also are there who are dealing with setbacks such as infections or kidney issues. Many of those babies will have a few days or maybe a week on antibiotics and a relatively short-term hospital stay before heading home.
For those parents of preemies who face a longer path, they can find many examples of success, stretching from New York to Jackson to Houston. Rohan has some advice for them.
“Try to take your fear and sadness that this wasn’t the original plan, and put it on the back burner,” she says. “Try to hear what the care providers are telling you. There are a lot of resources in the NICU. Embrace those resources. Don’t be afraid to ask the same question to two different people. Sometimes an issue will be unclear. Be part of the care team for your infant.”
Video monitoring of preemies is a way to supplement cell phone calls and verbal communication.
“We don’t have the ability to transmit bedside monitoring to parents, but we can set up a TV monitor and Skype,” Speer says. “There is not the technology to transmit minute to minute, so we are still dependent on cell technology if parents can’t be at the hospital.”
The tense moments are not only part of the parents’ routine.
“When I started nursing school, I had no idea what I was getting into,” Boolos says. “I never thought about how attached you can get to a patient. When you realize how fragile these babies are, it’s a lot of emotional investment. I catch myself thinking about patients, and sometimes it’s hard to leave work at work.”
Boolos always sort of knew that she wanted to do something in the medical field, and the NICU allows her to experience a wide variety of cases.
“The NICU is a whole di erent world from the rest of the floors,” she says. “Most of what people know about hospital settings is dealing with other adults. We take care of very small preemies from 23 weeks up to older babies with chronic conditions.”
As treatment tools have improved, so have the odds of a good outcome for those smaller babies.
“We have technology that allows smaller and smaller babies to survive, go home and become contributing members of society,” Speer says. “Unless we have a major malformation or major catastrophic illness, more than 90 percent of babies should be very normal at 1,000 grams and 27 to 28 weeks of gestation. If you get down to 23, 24 or 25 weeks, a significant portion of those babies will not survive, or the survivors will have major disabilities in learning, vision or hearing that may last their entire lives.”
Boolos is in a unique position to keep the lines of communication open with parents who are anxious and looking for progress.
“If it’s appropriate, I tell them about my journey to give them hope.”