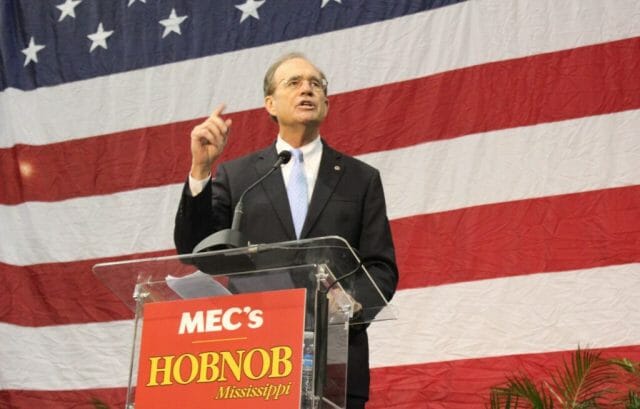 As Mississippi’s three-term Secretary of State, Delbert Hosemann is one of the state’s best-known, high-level officials. The scholarly, soft-spoken Republican is also considered a potential frontrunner for either lieutenant governor or governor in 2019. Former Clarion-Ledger reporter Mac Gordon speculated in a recent column that Hosemann may have cross-party appeal, noting, “Mississippi Democrats have not been as unhappy with Republican Secretary of State Delbert Hosemann as they have with a few other GOP elected officials. In fact, some of them would vote for Hosemann for governor, if they were fairly sure no worthy Democrat could be elected to the state’s highest office.”
Whether Hosemann will run for governor, lieutenant governor or even a possible open position in the U.S. Senate remains a tantalizingly open question for now. HottyToddy’s Randall Haley asked him about it and touched on other topics related to his career in this exclusive Q&A with HottyToddy.com.
HT: During your first political campaign, you gained recognition by taking advantage of your unusual name. Where does the name “Delbert” come from?
Hosemann: I’m a “Junior,” so my name—Charles Delbert Hosemann, Jr.—derives from my father. After my father died, I asked my mother once if “Delbert” was a family name, but she didn’t know. Most people don’t understand my name the first time I introduce myself, which has turned out to be a political asset.
HT: What have been your biggest challenges as Secretary of State?
Hosemann: After voter ID, within the last year, our agency has been challenged in protecting voters’ private information from cyberattack. By law, citizens provide their name, address, birth date and the last four digits of their social security number when they register to vote in Mississippi—everything a hacker would need to steal an identity. The Secretary of State’s Office stores all this information in its Statewide Elections Management System. We have implemented a variety of measures aimed at keeping this information safe, from geo-blocking and encrypting the data to 24-hour monitoring. So far, we have been successful in preventing a breach. No computer system is impenetrable, but we have remained vigilant and make security of voters’ information a top priority.


HT: Of your many accolades, what is your single most important achievement?
Hosemann: I’m not sure if I have many accolades, but I can think of two results: one professional and one personal. On the professional end, overseeing and achieving the enactment of a constitutional voter ID law in Mississippi. My philosophy is the collective intellect is better than one person’s view. In this spirit, the agency gathered stakeholders of every type, including the Department of Justice, and allowed them to have input in forming our voter ID law. We listened to one another and trusted one another. The end result has been avoidance of the expense and defense of litigation. Our law and its implementation were not challenged in court while virtually every other state has been sued. Just as importantly, we have enfranchised more than 6,000 Mississippians who may not have registered or voted in the past, but now have access with a photo voter ID.
On the personal end, the enactment of House Bill 855 comes to mind. This legislation, which I supported and helped push to passage, requires health insurers to provide coverage for the screening, diagnosis and treatment of autism spectrum disorder. Coverage of autism-related services includes Applied Behavioral Analysis, which has been proven to be one of the most effective treatments for those with developmental disorders. More than 10,000 children in Mississippi have been diagnosed with autism, so this legislation changed thousands of lives by giving them access to treatment.
HT: As part of your business reform plan, you formed several groups to revamp how Mississippi does business. Can you tell us the results of that plan and how it has affected economic development and job creation in the state?
Hosemann: Early on in my tenure, we gathered business owners, attorneys and representative organizations across the state and asked them and other stakeholders how they envisioned rewriting the business laws to be less restrictive and more business-friendly. We ended up scrapping the old LLC law completely and enacted new legislation that took into account the best sections of laws in other states, the needs of Mississippi businesses, and our collective business and drafting experiences. Now, our law allows business people to operate their LLC efficiently, effectively and with minimal expense. More than 100,000 LLCs now operate in Mississippi. We also lowered filing fees (Mississippi has the lowest filing fee in the country) and drafted new securities, trademark, non-profit, and corporate laws.
At the same time, we transformed the Business Services Division into an entirely paperless division. When paper documents were flowing through the office, it could take two weeks or more to form a business entity. Now, anyone can do it in a matter of minutes from their computer. We receive more than 700,000 documents electronically every year.
The result has been phenomenal. We see thousands of new LLCs come into being, which translates into new jobs and economic growth in our communities.
HT: Now that Mississippians can access and verify their voter registration statuses online, do you expect to see an increase in the number of registered voters in Mississippi? How do you feel the online tool will affect the integrity of the voting process for Mississippians?
Hosemann: Your vote is your voice and our future, so increasing participation in our election processes has been of particular interest to me. And ease of access to our election processes can correlate with more registered voters. Similarly important is making sure voter registration information already in our Statewide Elections Management System is correct.
The new features on Y’all Vote, an online voter information center we launched last year, allows voters to check their registration status and change their address if they’re already registered but have recently moved elsewhere within the state. Voters can also download a registration application online and then send it in to their Circuit Clerk’s office to register for the first time. We want to make sure folks register, but we also want to make sure their ballot counts!


HT: What is your biggest concern for the state of Mississippi today? What serious issues will Mississippi face in the next 10 years?
Hosemann: Our education system and economy are two things which always weigh heavily on my mind. And, of course, the two are connected. Our children and our grandchildren are our future, and each and every child deserves a superior educational experience so they can achieve their life’s goals. I believe, unequivocally, we must invest in our small- to medium-sized businesses. Finally, the delivery of health care in Mississippi must be cost-effective, high-quality and accessible.
HT: Where do you see yourself in the next five years? There have been rumors that you may run for governor or lieutenant governor. Is this a possibility?
Hosemann: I began life as a public servant with an agenda: oversee the enactment of a constitutional voter ID law; negotiate our 16th Section land leases to increase and protect income flowing to our schools; revise our business laws to make it as easy as possible to establish a successful business with the prospect of gainful employment; and protect and enlarge our public spaces.
We are in the final stages of implementing this agenda. Voter ID is in place. We are approaching $1 billion in 16th Section revenue for our schools during my service. We have secured thousands of acres of public lands, and we are forming close to 24,000 new LLCs per year. Once you complete the work you were hired to do, it is probably time to move on. Maybe I’ll get hired to do something else.
HT: Who or what inspired you to pursue the position as Secretary of State?
Hosemann: The small businesses I represented as a business lawyer inspired me. For years, I had the privilege of watching some of Mississippi’s most competent business people make the daily decisions they had to make to ensure their business thrived. This front-row seat also alerted me to the inefficiencies existing in our business laws and the time and cost of starting a business in Mississippi. I believed I had solutions to offer citizens in these areas, which is one reason I ran for office. Our public agencies need to be run like a business and consider every citizen as our paying customer.
HT: How do you spend your free time? Do you know what free time is?
Hosemann: Being a part of my grandchildren’s lives as they grow up is my favorite thing to do in my free time. Like many Mississippians, I also love the outdoors. Duck hunting with my lab, Bear, and running just about anywhere in the state are two of my favorite pastimes.
HT: What makes your house a home?
Hosemann: This is the easiest question to answer: my wife, Lynn, our three children and six grandchildren—two of them born within the past two months—and my lab, Bear.