Meek School Magazine: David Kellum Ahead of the Curve You most likely know him as the “Voice of the Rebels.” You may also know that Ole Miss’s storied sportscaster David Kellum has no shortage of laurels. He has received the Lindsey Nelson Outstanding Sportscaster Award from the All-American Football Foundation, and the National Sports Media Association recently named him Mississippi Sportscaster of the Year—for the eighth time. Director of broadcasting for Ole Miss IMG Radio Network since 2014, he was a DJ in high school, owned his own radio station by age 26, and is one of just a few play-by-play announcers in the SEC who handle all three major sports.
He had played sports in high school, but knew he wasn’t really good enough to take it to the next level. “It was my way to stay connected with sports without having to be a coach or something like that.”
As an Ole Miss alum himself, Kellum is particularly proud of the Meek School and the department’s expansion in recent years, which includes staying on top of the rapidly evolving use of digital media in journalism, and new offerings in the IMC undergraduate and graduate school programs. “I’m so excited about the direction it’s going, the increase in the faculty members, the dedication to putting out people that are really, really good. I think it does translate into the real world, which I think is special. [Journalism] department head Deborah [Wenger] and all of them have done just a phenomenal job with the department.”
Despite being on the road so much, Kellum says he’s always watching from afar. “I get tired of hearing about Missouri and Syracuse and all these places. I think Ole Miss has got a really good thing going. And I hope that, in some small way, I can help with that, too.”


Here’s how: He’s not planning to retire any time soon, but this year he decided to pass the baton by way of the classroom, teaching an undergraduate level course in sportscasting. Kellum describes himself as just a “normal dude.” On the job though, he’s all about his audience. He’s known for bringing an infectious enthusiasm to his announcing, which he attributes to having started so young. “I was really more modern for my time than others. Over the top, to be honest with you,” he admits. That enthusiasm comes through in the classroom, as Kellum shares real-world advice with students looking toward careers in broadcasting.
“There are so many new avenues … The industry is changing rapidly right now and we are seeing new jobs pop up as technology grows.” These days, credentials are important, although, Kellum says, in the broadcast business, “They want to know what you sound like, what you look like, and how well do you write.” His goal is to help teach students how to get jobs in the field.
According to conventional wisdom, it’s skill, talent and luck that make a person successful in a career, and you need at least two of the three. Talent usually shines early on. Skill, you develop with practice. Luck, for many, is just a case of being in the right place at the right time. Kellum shared his own luck story:
In 1977, Ole Miss was hosting the first SEC baseball tournament ever. It was May, and most of the students and station staff were gone. WCBH campus radio station manager James Bailey came into the rotunda of Bryant Hall, where Kellum was hanging around waiting for his mom, and blurted out, “I got to find somebody to do these games!”
Kellum happened to overhear Bailey’s remark, and volunteered. “He wheeled and looked at me and he said, ‘Who are you?’ I said, ‘I’m David Kellum.’… He said, ‘Do you think you can do ’em?’ I said ‘Sure!’”
“I’d never done a game in my life … I went over and I did the SEC tournament for the campus radio station as a high school senior. I don’t think he knew it. And I sure wasn’t going to tell him!”
That led to a job at the local Oxford station, WSUH, and the opportunity to do play-by-play for the high school football team. The following year, Kellum “inherited” Ole Miss baseball. 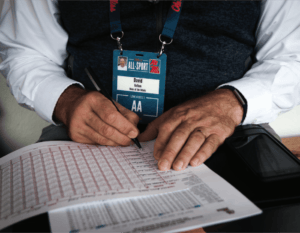 Lucky or not, what can students do to improve their chances? Kellum advises, “Do great in school, take care of your business, be the top student in every class as you know you need to be but then try to get as much experience as you can locally … so somebody can say, I can see that you have done something, you didn’t just sit idle. And try to find something that’s in your field … You may be really gifted and talented, the whole nine yards, but if you haven’t had some type of experience they’re going to frown upon that.” He suggests working for the athletic department, or campus or other local radio or TV stations. If you can’t work on a real show, he says, do a mock game, something you can put down in audio or video to start a good résumé tape.
Life in broadcasting isn’t as easy as it may seem, though. “They think you just show up and oh, there’s David on the radio. But there’s, you know, hours and hours of prep before every game … it’s 10 months of go, go, go, go, go, and it gets pretty difficult … It’s not just the 9-5 part of it, it’s the traveling, being gone. I get tickled at a coach who complains, ‘Boy, this is a grind.’ ‘Oh really? I’m in my third sport and I know you’re grinding, and I want you to be successful, and I’m glad you’re giving it your all but I don’t want to hear about your grind.’”
The intense schedule can also be tough on your personal life, he cautions. Kellum gives himself a B on “family stuff.” Though he says, he plans to make it up to his wife when he retires.
And when will that be? 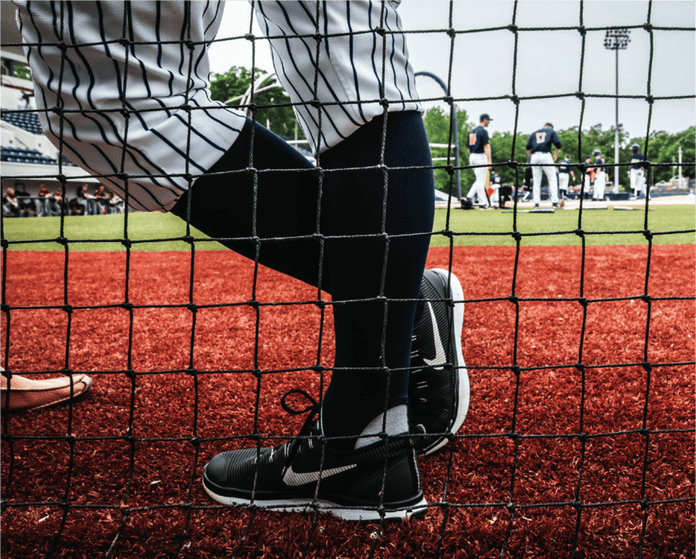 “I’m going to walk away when I think it’s the right time … I still have a passion for it. I love what I do. Sometimes by the end of the year it’s like too much ice cream. I’ve done it and done it and done it … But I still want our teams to win, and go as far as they can go. And I love being part of it. If that passion should wane, I’d probably walk away … But I’m still burning pretty hard.
“It’s really funny, I’ve had … parents come up to me and say, ‘He’s going to be you someday!’ And I put the years to it and I say, no, he’s not going to be me, not unless they fire me, he’s not going to be me. But I had a kid this year at Meet the Rebels, like an 8-year-old, and his daddy said, ‘He wants to be the Voice of the Rebels some day.’ And it kind of hit me, and I said, ‘You know what? You might be the one.’”

KELLUM NAMED SPORTSCASTER OF THE YEAR

For the eighth time in his career, Ole Miss play-by-play announcer David Kellum has been named the Mississippi Sportscaster of the Year by the National Sports Media Association.

NSMA members annually elect print and radio/ television winners from each of the 50 states and the District of Columbia.

Winners were honored during the 58th annual NSMA Awards Weekend, June 25-26, in Winston-Salem, North Carolina. The NSMA recently announced that it is moving its operations to Winton-Salem from Salisbury, North Carolina, where it was founded in 1959.

Kellum, a native of Oxford, is in his 28th season as the “Voice of the Rebels” and has been associated with Ole Miss broadcasts for 38 years. He became the play-by-play announcer for Rebel baseball as a freshman student at Ole Miss in 1978, and he is one of only a few announcers in the SEC handling play-by-play for football, men’s basketball and baseball.
In addition, Kellum is the host of the coaches’ weekly radio shows and has been the master of ceremonies for countless Ole Miss events, both athletically and academically.

The Meek School Magazine is a collaborative effort of Journalism and Integrated Marketing Communications students with the faculty of Meek School of Journalism and New Media. Every week, for the next few weeks, HottyToddy.com will feature an article from Meek Magazine, Issue 5 (2017-2018).