December 29, 2017
1
567
I probably never would have gotten my college degree had it not been for a job with the U.S. Forest Service in Troy, Montana.
The late U.S. Rep. Jamie Whitten took care of his hometown boys, and thanks to Jamie, I found myself with a group of young men in a 1957 Chevy station wagon, driving north to make some badly needed money. It was the summer of 1958, and I was 17 years old. We were hired to work on the control of a rust infection that was killing Montana’s enormous white pines, but we ended up as firefighters.
I was too young to qualify for the federal jobs program available at the time, but Jamie more or less allowed me to lie about my age. I had never before ventured out of the state of Mississippi except to Memphis, which, as we all know, is really a Mississippi city. That journey to Montana and the return trip to Mississippi ultimately took us through 26 states, and this country boy got a new worldview.
Although located a couple of miles from the Idaho state line and just south of the Canadian border, Troy felt pretty much like the middle of nowhere. I was so homesick, I would crawl into the bushes high up on the mountain, cry, and pray that God would get me home soon.
It was an awful fire season in the West, and we ended up fighting fires most of the time. While combating one fire in the Glacier National Forest, we went 32 days without a change of clothes. The Forest Service parachuted in food, stoves, complete camps and everything needed as we remained inside the fire area.
I remember mountains of C-rations dropping in, along with cast iron stoves, most of which would explode when they landed and hit a rock. We would pore through the C-rations to find the good stuff. I can’t recall eating that well at home! In fact, I enjoyed those WWII-era C-rations so much that, to this day, I keep a case of K-rations (the modern versions of C-rations) in our emergency shelter and, from time to time, tear open a package, savor a snack and recall those long days fighting fires in the mountains of Montana. 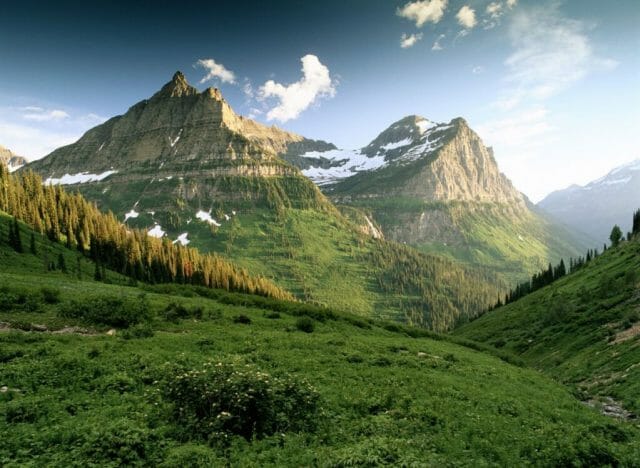 The forest trees were so large and tall, they reached into the clouds. Often, we worked above the clouds, and sometimes we were pulled up to the tops of mountains by hanging onto ropes attached to massive bulldozers that looked to be about the size of City Hall. It was a challenging time that grew me up fast!
We lived in tents on wooden platforms—these were old logging camps, as I recall. We were awakened at 5 o’clock every morning to enjoy a breakfast feast beyond imagination. We made sandwiches and packed other food in cloth sacks, tied these to our belts, and headed to the mountains each day.
But as dangerous and exhausting as firefighting was, we managed to squeeze in a little fun now and then. During a brief period when we returned to civilization, I made a beeline for the nearest pay phone to call my girlfriend, Becky.
I only had $2.50 to my name and told the operator to just cut us off when the money was used up. I thought it was strange that Helen and I got to talk for about an hour, but I was tickled. Later, when I finally got back home to Charleston, my dad was not so pleased. He had received a bill for more than $100 for that one call. To this day, I don’t know how that happened—I just know the phone company somehow tracked down my family and made us pay for that hour-long phone call.
As smitten as I was with Becky, that didn’t stop me from going on a double date with my buddy and fellow firefighter, David Sayle. He had landed a girlfriend in Troy and talked me into joining them and his girlfriend’s friend for a movie. I figured Becky would never know, so I agreed.

We picked up the two young ladies and headed to the drive-in movie theater. We parked to watch the movie, but I soon began to notice a terrible odor. It got worse and worse, and I could not wait for the movie to end. “These Yankee women smell awful,” I thought.
After the movie ended, we carried the girls home as quickly as possible. As soon as they got out of the car, David and I began to complain to each other about how bad they smelled. It was almost unbearable.
Once we arrived back at the camp, we noticed the smell lingered. That’s when we discovered that David had run over a skunk, which had gotten stuck in the front grill of the car.
Even though I now realized the foul stench did not emanate from our Yankee dates, I don’t think I ever dated a girl from up north again.
When I finally made it back home to Charleston, I was shocked when my parents told me, with great excitement, that I had $7,200 in the bank. Jamie Whitten had arranged for our checks to be deposited directly in the Tallahatchie County Bank. This was more money than all members of my family combined had ever earned in a single year!
The day after I returned from Montana to Charleston, I packed up and left again the very next day: this time to Ole Miss, where I began my college education, thanks largely to Rep. Jamie Whitten and the U.S. Forest Service. And I later married Becky, who, thankfully, smelled nothing at all like a dead skunk.

Ed Meek is the publisher of HottyToddy.com.