Tupelo Midwife Has Delivered 150 Babies in the Old-Fashioned Way

March 8, 2018
0
430
Oxford resident Kady Holcomb-Jones, 29, recently visited Blooming Moon Midwifery Services in Tupelo for a prenatal visit with her midwife, Toni Hill.
Holcomb-Jones had her first two children in a traditional hospital setting. The experience with her now 4-year-old, Garrett, left her unhappy.
“If I didn’t do what he [the doctor] said, he was going to throw me out of the hospital,” Holcomb-Jones said.
When she became pregnant with her third child, Noah, 3, her mother encouraged her to seek out Hill and have a home birth. Her mother even offered to pay for it. Holcomb-Jones agreed. She hadn’t met Hill in person but had followed her on Facebook.
“I was like, oh, I really like her. She is really laid back,” said Holcomb-Jones. “But, man, she likes to hug.”
Now pregnant with her fourth child, Holcomb-Jones will be having another home birth with Hill and her team.
Hill, a 39-year-old Tupelo native, began training as a midwife in 2008. She has caught about 150 babies over the years and takes joy in watching those babies grow. She works with a team of women from North Mississippi, including Christa Sheman McGrew, Lauren Paige Tate and Alison Doyle.
All three women work closely with Hill during births and have let Hill deliver their babies. They are friends, colleagues and fellow students.
“Toni is one of those people that just makes you want to get comfy and tell all,” Doyle said. “She is kind, intelligent and will be honest with you in a gentle way. She does the right thing even when no one would hold her to it.” 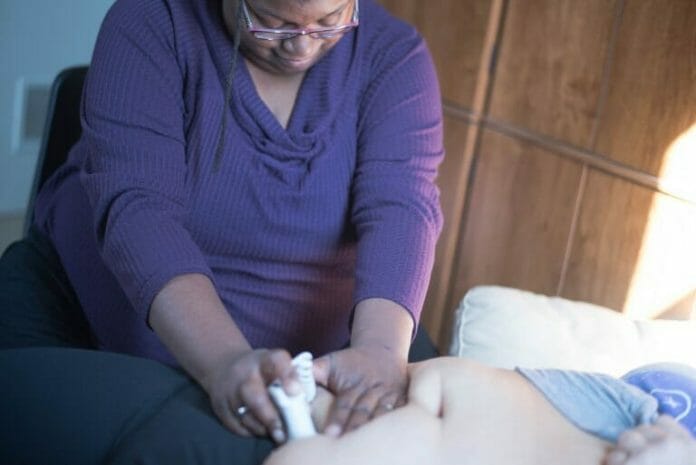 Hill became interested in the midwife trade after reading a “Little House on the Prairie” book when she was 12. In the book, a midwife delivered a baby, and Hill thought, “It was so cool.” She was 14 when her mother became pregnant with her sister. Her mother kept her involved, and Hill did a lot of her own research on birth and breastfeeding, which further sparked her interest.
After being displaced by Hurricane Katrina in August of 2005, Hill and her family moved from the Gulf Coast to Tupelo. Once here, she made plans to change the way North Mississippians look at pregnancy and birth.
“I was a doula on the coast, but I was only seeing one or two clients a month,” Hill said. “When I came here, I was seeing six to seven clients a month because there were no other doulas here.”
Per the DONA (Doulas of North America) International website, a doula is “a trained professional who provides continuous physical, emotional and informational support to a mother before, during and shortly after childbirth to help her achieve the healthiest, most satisfying experience possible.”
Hill wanted to see all women have access to that kind of support during birth. She put together a plan for a doula program and presented it to the local hospital. Volunteers would be trained to support patients, and the program would be self-sustaining. She said the hospital wasn’t interested.
Determined to make a difference for women in North Mississippi, Hill began researching various birth-related organizations. Her research led her to Birthing Project USA. Their website describes the organization as “the only national African-American maternal and child health program in this country. We are a volunteer effort to encourage better birth outcomes by providing practical support to women during pregnancy and for one year after the birth of their children.”
In September of 2006, Hill founded the Northeast Mississippi chapter of Birthing Project. NEMS Birthing Project relies solely on volunteers called “sister-friends.” Hill said they had 11 volunteers and 60 to 70 pregnant women enroll in the first year.
This trend has continued throughout the program’s operation. Many women seek support, and there are not enough volunteers to go around, but the program has been successful in educating and supporting the women and families of North Mississippi.
Hill wants to spread knowledge and empower the women in her community. Around the same period that she started NEMS Birthing Project, she worked for Women, Infants and Children (WIC).
She started as a breastfeeding peer counselor, then was promoted to lactation specialist, a position she has held for the last 10 years. Six months after becoming a WIC lactation specialist, she became a La Leche League leader. Hill has helped many mothers with breastfeeding.
“My dream is for Medicaid, all insurance, to cover home birth,” she said. “There just isn’t enough access for all women. As midwives, we try to do what we can to help people to be able to afford it. Women should be able to access whatever kind of birth they want.”

Amanda Bannon is a journalism major at the University of Mississippi. This story originally appeared on OxfordStories.net.