The revised Ward map for Oxford residents is now available to view online and city officials are looking for final recommendations and comments from citizens before voting to approve the new map next month.

The annexation of about 11 square miles that was finalized in October by the city of Oxford created the need to redraw voting districts for the city.

Assisted by Three Rivers Planning and Development, Oxford officials met in December to establish guidelines for the redistricting process which included forming a Redistricting Committee comprised of two members of each ward representing the largest two racial demographics.

Using the 12 criteria established by Three Rivers and subsequently approved by the Oxford Board of Aldermen, the committee identified cultural institutions, neighborhoods and population groups that should not be split by ward lines. The primary challenge throughout the process was defining six wards with no more than a 10 percent variance in population.

1. The number of wards will not exceed the number of members of the governing Board of Aldermen.

2. The ward plan shall be established in a manner which confirms the principles of one person, one vote so that there is equality in total and voting age population among districts.

3. The ward plan shall be established in a manner that ensures the fair and effective representation of all minority groups residing in the municipality.

4. Ward lines shall be drawn in a manner which strives to keep intact communities with established ties of common interest and association, whether historical, racial, economic, ethnic, religious or other.

5. Each ward shall be contiguous, and consistent with prior redistricting plans to the extent possible.

6. Each ward shall be as compact as possible.

7. Each ward shall follow natural geographic boundaries and maintain an equitable land area and road mileage, where possible.

8. Incumbents shall be separated into individual wards to the extent practicable, but only if such action does not affect adherence to the primary criteria stated herein.

9. Census blocks will only be broken when necessary to maintain an equitable population.

11. There shall be no partisan gerrymandering. Ward lines shall not be drawn to create an advantage for any one political group.

12. Districts will hold “regular” shape unless it is necessary for a District to take an “irregular” shape that is not influenced by racial makeup as the dominant or controlling rationale

The committee met four times over a three-month period and reviewed and considered several map options before making its final map recommendation. The final map was approved by the committee in a 7 to 1 vote. Three committee members were not present for the final vote and two members abstained. The dissenting voter cited low population turnout for Ward 5 and suggested adding the Woodlawn subdivision to Ward 5 and Goose Creek Subdivision to Ward 6 to offset population; however, the motion did not receive a second, according to information submitted by the committee to the Oxford Board of Aldermen on Tuesday. 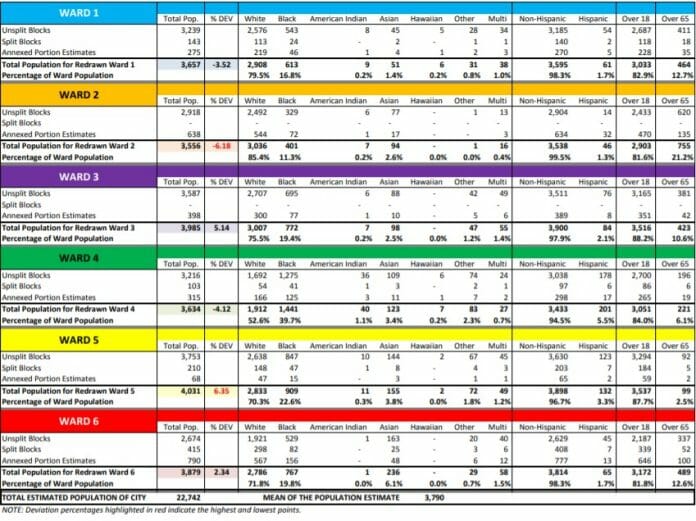 During the first reading of the ordinance to update the ward map, Aldermen Preston Taylor and Janice Antonow expressed disappointment that there was no majority-minority ward.

Oxford’s Chief Operating Officer Bart Robinson said the committee attempted to create a majority-minority ward, however; he said Oxford’s population is too dispersed throughout the city.

“The closest we were able to get is in Ward 4 where the minority population is 47.9,” he told the mayor and Board of Aldermen Tuesday.

Antonow said she was a bit surprised at how dispersed the minority population is in Oxford.

“In a way that’s great, but it doesn’t help when looking for a majority-minority ward,” she said.

The Board will hold a public meeting at 5 p.m. on July 2 where citizens can attend and ask questions or recommend any changes to the map before a vote is taken by the board.

For residents who are unable to attend the public meeting, the map is available to view online and at City Hall. Comments and suggestions for changes can be sent via email to the City Clerk or the Mayor’s Office or by calling City Hall at 662-236-1310.