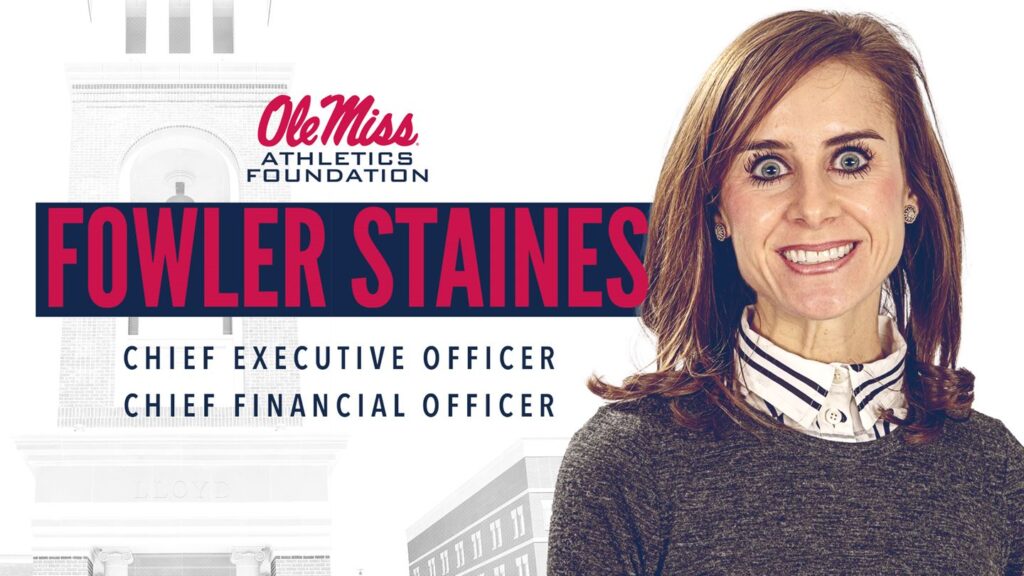 “Fowler is well respected throughout our athletics department and provides tremendous leadership in the Foundation,” Carter said. “As commitments have increased for the Forward Together campaign, Fowler has done an outstanding job managing the growth in our OMAF budget and overall operation. She understands the mission of the Foundation, and I look forward to seeing our fundraising efforts grow under her vision.”

Since joining the Ole Miss Athletics Foundation as CFO in August 2012, Staines has overseen an operations budget that has risen from $14 million to more than $21 million annually and capital campaign funds that have grown from $75 million to $184 million. She has supplied guidance in a number of other areas, including implementation of the Forward Together campaign to fund facility projects and construction budgets; future revenue and expense projections for the athletics department; execution of coaches contracts; tax treatment for compensation, major gifts and the annual fund; debt financing; estate planning; deferred giving and other business aspects of the Foundation.

A Certified Public Accountant, Staines previously worked for RSM LLP, formerly known as McGladrey and Pullen LLP (Washington, D.C.), as an auditor in its nonprofit practice and Kinney and Associates (Oxford) in tax and accounting. She graduated from Ole Miss in 2007 from the Patterson School of Accountancy and received her master’s degree from UNC Charlotte in 2008.

Originally from Marks, she is married to Billy Staines from Severna Park, Maryland, and the couple has three children: Graham, Miles and Annesly.

A native of Costa Mesa, California, Mossberg spent more than a decade in various roles at Ole Miss prior to making the move to UB. He started as a student-athlete, playing baseball for the Rebels from 2000-03, before returning as the Director of Baseball Operations in 2006. After five seasons as an administrator and coach, Mossberg transitioned to Major Gifts Officer for the Foundation, where he brought in several major gifts as part of the Forward Together campaign.

Owen has been with Ole Miss Athletics since June 2005, when he started in the athletics ticket office and eventually oversaw the department. He shifted to the Foundation in May 2018 as Associate A.D. for Resource Development, where his responsibilities include annual giving and the ticket operation.

A native of Batesville, Owen graduated with degrees in biochemistry and forensic chemistry from Ole Miss in 2005.

The busy intersection of Highway 7 and University Avenue may soon be made safer thanks to the work of local and state officials pushing for the much-needed funding.
Read more
Contributors

Column: Ole Miss Game Days are Back, and We Should Be Grateful

After a tumultuous offseason centered on COVID-19 storylines, the Southeastern Conference kicks off this weekend with a full slate of games, including one here in Oxford between No. 5 Florida and the new-look Ole Miss Rebels.
Read more
Football

The SEC kicks off the 2020 tomorrow with all 14 schools taking the field. The HottyToddy.com staff has made their picks for the week.
Read more
Football

By Jeff Roberson If you think there hasn’t been much going on football-wise in Mississippi in recent months, you...
Read more
Latest Videos

Meet Cameron Sadler from Dothan, Alabama, one of four candidates for Miss Ole Miss 2020. Sadler, an integrated marketing communications major, sat down for an exclusive interview with HottyToddy.com to explain her platform based around what she calls "service in the process, not service as an end promise".
Read more
Personality Elections
00:01:29

Meet Lilli Gordon from Nashville, Tennessee, one of four candidates for Miss Ole Miss 2020. Gordon, a senior biology major, sat down for an exclusive interview with HottyToddy.com to explain her platform, which centers around the slogan "Life is still good."
Read more