Overall, crime numbers are dropping in Oxford. However, with a recent series of arrests, car burglaries are trending up.

The Oxford Police Department (OPD) is responding with stepped-up enforcement and a social media campaign to encourage residents to take steps to secure their homes and belongings.

“It’s a difficult time for a lot of people right now, you know, their life has changed. There’s a lot of people that aren’t working, so the last thing you want is someone to steal your property,” Oxford Police Chief Jeff McCutchen said.

OPD has created what they’re calling a “9 p.m. Routine.” Every night at 9 p.m., they remind the community on Twitter to lock doors and set alarms, among other safety tips. 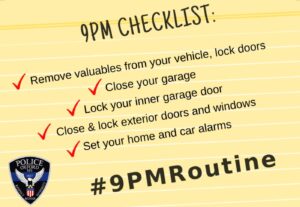 “We want to make sure we prevent crime and this is a great way that we can remind people but also get that engagement,” McCutchen said.

When many students leave town over holiday breaks and in the summer, OPD typically sees an increase in home break-ins.

“It doesn’t take long to figure out a routine of a college town. We have to adjust what we do, and we assumed, and we were right when the students leave those burglaries are going to pick up,” McCutchen said.

By involving the community in this safety campaign on social media, OPD is hoping these measures decrease the crime.

“We’re watching and we’ve engaged 50,000 other people to help us watch as well. so we ask our community, ‘Hey, if you see something say something’,” the chief said.

And McCutchen has a message for those committing crimes in Oxford.

The Lafayette County Board of Supervisors unanimously approved placing a marker that notes the seven known instances of lynching in the county on the...
Read more
Extras