It is one of the tragic ironies of the COVID-19 pandemic that the same generation of children whose suffering moved Robert Kennedy to action when he visited them 53 years ago this week is in peril once again as their state leaders fail them in all-too-familiar ways.

As COVID-19 infections rise in the state, many of the state’s poorer adults will bear the brunt of the virus’ impact, both physical and economic.

As an article about the state’s lackluster response in the New Yorker about pointed out earlier this week, “No state in America is more vulnerable to the pandemic than Mississippi.” That’s because the state is at the top of the list of “nearly every “underlying condition” that makes people especially susceptible to dying from COVID-19.” High percentages of people in Mississippi suffer from diabetes and obesity, and more die from asthma and heart disease at higher rates than any state in the nation. These numbers are even worse in the Delta, the poor northwest region of the state running along the Mississippi river where Kennedy visited.

But just like in 1967, Mississippi’s current leaders stayed for too long in denial about the crisis, they prioritized political and business concerns over the health of its citizens, and, most devastatingly, consistently refused to accept federal programs that would have protected the health and improved the lives of thousands of Mississippians.

Kennedy visited the Mississippi Delta in 1967 during a largely hidden catastrophe, the impact of which state leaders at the time downplayed or denied outright. In the space of 18 months before he arrived, a “perfect storm” of mechanization, advances in herbicides, and some ill-timed federal policy changes had meant more than 54,830 farmworkers and their families (including 24,756 children) who were already very poor had lost their livelihood and were suddenly even hungrier and poorer.

Yet in the years and months preceding Kennedy’s visit, Mississippi’s conservative political leaders, citing “principle,” had again and again rejected millions of new federal dollars and programs that would have not only directly helped its perennially poor residents (most of whom were African Americans) but would have also circulated locally, boosting small businesses and stabilizing communities.

In fact, like today, health care in 1967 was out of reach for many of the 200,000 eligible residents in the state because, although Medicaid was available elsewhere for poor Americans starting in 1965, Mississippi refused to adopt Medicaid, waiting until 1970.

Then, as is true today, the state’s refusal was not just an abstract policy decision. In community after community, it meant a childhood of pain, illness, and suffering for thousands of children. When doctors from the Field Foundation followed Kennedy to the state a few weeks after RFK’s1967 visit, they examined children and found they had severe anemia; eye, ear, and bone diseases; and appalling tooth decay. Many of the babies and children had rickets, scurvy, and beriberi, which were unknown elsewhere in twentieth-century America. These pathologies stemmed from severe vitamin and other nutrient deficiencies and are usually only associated with undeveloped nations and famine, the doctors’ report explained.

There are few things a Mississippi politician likes better than “tradition,” and, whether they realized it or not, in 2014, Mississippi’s then-governor, Phil Bryant, and lawmakers continued the state’s ignoble tradition of resisting aid that would ease the suffering of their fellow citizens.

With condemnations of Obamacare ringing through the Capitol, state officials chose not to expand Medicaid as part of the Affordable Care Act, a component of the act which was designed to cover people too poor to qualify for subsidies on the insurance marketplaces. At the time, this left 138,000 low-income Mississippians, many of whom, as the Field Foundation report described, spent their childhoods suffering from preventable illnesses and health, again with no insurance options at all.

As Mississippi’s leaders took their stand, Kennedy would have almost certainly recognized the echoes of the same arguments that conservative Mississippi leaders such as Senators John Stennis and James O. Eastland and Representative Jamie Whitten made in 1967. Often the officials making these decisions cite the same reasons as in 1967– “creeping socialism” protecting taxpayers, fears of breeding dependence, too much “federal interference.”

And although there is now more and growing support for its expansion among state officials, Gov. Tate Reeves remains adamantly opposed, even though clinging to his position would leave an estimated $11.1 billion of federal funds on the table over the next decade and could leave 210,000 more eligible Mississippians bereft of coverage for routine and catastrophic health care.

This refusal to expand coverage has also meant an accelerating disaster for many rural hospitals in the state. Some have closed and all of them are strained. Almost 50 percent – or 31 of 64 — of the state’s rural hospitals are at “high financial risk” of closing, one 2019 report found.

And now, as the wave of a pandemic crashes over the state, what does this mean for that cohort of adults, now in their 50s and 60s, who were once the children Kennedy saw and talked about until the day he died?

It means that too many of the same ones who once lay hurting and hungry as children will gasp and struggle for each breath as the virus swamps their already strained systems. It means they will lie feverish and frightened at home instead of seeking care. It means that because the state has never met its responsibility to provide a quality education for all its children, too many of them are working low-paying jobs, and, desperate to hang to them, they will work even when they shouldn’t. It means, sadly, that more of them will probably die.

Over the past 53 years, the policy changes and philanthropy that came from the “ripples of hope” sent forth by Kennedy’s eloquent advocacy for them, along with their own extraordinary resilience and perseverance, have resulted in some (if not nearly enough) hard-won progress for many of these Mississippians.

During this fresh crisis, however, I fear that the deep and powerful currents of failed state leadership will engulf too many of them once again in unnecessary suffering. 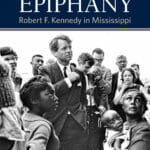 Ellen B. Meacham is the author of “Delta Epiphany: Robert F. Kennedy in Mississippi,” which is out in paperback this month, and teaches journalism part-time at the University of Mississippi. You can read more about her work at ellenmeacham.com.