Show Review: How to Dress Well 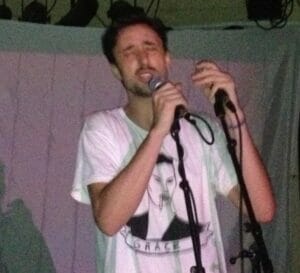 By Ben Hurston, Student, Meek School of Journalism & New Media
benhurston@gmail.com
“Either this is going to be great, or we are all going to pretend like this didn’t happen,” Tyler Krell warned the audience as he took the stage last night at Proud Larrys.’
Krell, the man behind the highly-acclaimed and difficult-to-categorize musical act How To Dress Well, had recently learned that both of his bandmates had their Visas denied and were going to be unable to join him onstage. To make matters worse, the man who does visuals for the show was stranded in Paraguay. Whether Krell liked it or not, this was a one-man show.
His first song, “Suicide Dream 1,” was nothing more than Krell’s a capella vocals—his shockingly impressive falsetto reverberating through a heavily distorted microphone. But thanks to Oxford’s own Dent May, who took Krell to his home earlier in the day to download the needed material, the rest of the hour-long set saw Krell singing karaoke-style over instrumental recordings of his tracks.
But it was not the karaoke you might hear on a weeknight at Rooster’s or El Milagro. Krell paired his pitch-perfect vocals with beats ranging from minimalistic hip-hop to pop bangers, creating a rare sound that was as vulnerable as it was powerful.
Early on, he treated the audience with a new song, but advised, “Don’t let it stress you out because it’s, like, loud.” Judging by the reaction from the crowd—for once they stood almost completely motionless—it might have done just that. But if that was an instance when Krell failed to connect fully with his listeners, it was the only one.
When the lights came on at 11:50, and Krell protested that he still had two more songs, the audience responded with a roar that the Larrys’ crew couldn’t ignore. They let him play one.
And he closed just like he opened, relying solely on his voice. Krell stripped down the usually hard-hitting beats of “Set It Right” and turned it into a haunting, a capella masterpiece.
The opening band, BEACON, had warned the audience that Krell’s set would be both “phenomenal and heartbreaking.” They were right.
Total Loss, the sophomore album by How To Dress Well, is out now on Acéphale Records. Catch an a capella performance of “& It Was You” here.