By Tad Wilkes, Nightlife & Lifestyles Editor
tad.wilkes@hottytoddy.com
The Square tree’s lit, the wreaths are up on the light poles, and Black Friday shoppers have taken their first big whack at sprinkling their discretionary dollars around town. But perhaps more fun than Black Friday is Thacker Thursday.
Thacker Mountain Radio ends its season this week in a big way, in a big place, returning to its sometime home the Lyric Theatre, just off the Square—because the only thing better than Thacker is Thacker plus whiskey, ice-cold tallboys, and a little more elbow room.
This Thursday’s show starts at 6 p.m. and includes songwriter Shannon McNally, poets Beth Ann Fennelly and Melissa Ginsburg, and Sheilah Hamilton Patin. Special musical guests will include the Peeper Maries featuring Gina Sexton and Jenny Gordon, as well as Tiffany Gammell, Anna Donnell, Kala Waltman, and Amanda Malloy.
“The Thacker Mountain Radio Holiday Season Finale is a way to celebrate the end of a fantastic fall season of Thacker and the beginning of the holiday season,” says Kathryn McGaw, the show’s producer. “I’m particularly excited to highlight some excellent female writers and musicians. What a great way to showcase Oxford’s exceptional literary and musical traditions and talents—right here in our community and through the radio and internet to audiences statewide, nationwide. and even internationally.”
“And, while we’ll surely miss Duff Durrough and his inimitable spirit especially at this time of year, I think he’d be pleased to see that his mark on the show—that feeling that when you experience Thacker, you’re joining our extended family—remains not only in tact, but thrives.”


Shannon McNally released her first CD, Jukebox Sparrows, in 2002 and moved from her home in New York to New Orleans in 2005. Since then she has toured the U.S. extensively and released a series of CDs including, Western Ballad, Coldwater (with Jim Dickinson) and Geronimo. Her latest release, with Amy LaVere is, Chasing the Ghost: Rehearsal Sessions. Earlier this year, she toured with Luther Dickinson’s band, the Wandering, and contributed to the band’s CD, Go On Now, You Can’t Stay Here. Her music has received rave reviews including from The New York Times, which opined, “She has the voice: bruised, smoky and ornery, right at home where country and soul meet. She has the melodies and the timing … she’s irresistible.” Shannon lives in Holly Springs with her husband (Thacker drummer) Wallace Lester and their daughter, Maeve.
Click here for video of McNally and her band Hot Sauce performing “Bohemian Wedding Prayer” at Music in the Hall.
Beth Ann Fennelly is author of the poetry collections Open House, Tender Hooks, and Unmentionables and a book of nonfiction, Great with Child. She is a contributing editor at The Oxford American, where she frequently writes essays on Southern food, music, and books.  In 2011, she was named Mississippi Humanities Teacher of the Year and College of Liberal Arts Teacher of the Year. Fennelly lives in Oxford with her husband, the author Tom Franklin and their three children. She teaches poetry and nonfiction writing at the University of Mississippi.

Melissa Ginsburg is author of the poetry collection Dear Weather Ghost, forthcoming from Four Way Books, and the chapbook Arbor (New Michigan Press). Her poems have appeared or are forthcoming in Jubilat, Copper Nickel, The Iowa Review, Field, Pleiades, and other publications. Ginsburg lives in Oxford with her husband, the writer Chris Offutt. She teaches creative writing at Ole Miss.
Trials of the Earth was written by Mary Hamilton (1866-1936) in 1931 as her recollections of life in the Mississippi Delta backwoods during the latter part of the 19th century. Rejected by Little, Brown in 1933, the manuscript resurfaced in 1991 and was published by the University Press of Mississippi. This year, Nautilus Publishing put out a 20th anniversary edition with a new introduction by Morgan Freeman. Hamilton writes of her arduous work, deep sorrows, and exalting joys working in a lumber camp charged with clearing the forests of the Delta. Her straightforward narrative details cooking for large groups of lumberjacks, childrens’ births and deaths, impermanent homes, loneliness, and natural disasters. Hamilton’s great-granddaughter, Sheilah Hamilton Patin, a language arts instructor at Texas A&M, will appear on the show to discuss her great-grandmother’s incredible life and this harrowing and historic book.
Admission is free but donations will be strongly encouraged to help fund the 2013 spring season. A cash bar will be available. Listen in Oxford on 92.1 FM or online at www.myrebelradio.com. 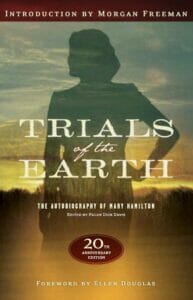 Allen Boyer: ‘The Life of William Faulkner,’ by Carl Rollyson