On Cooking Southern: Brisket and Latkes

Have a hearty Hanukkah

By Laurie Triplette
ldtriplette@aol.com
SOUTHERNISM OF THE WEEK
Guilty as sin: REALLY REALLY GUILTY; as guilty as one can get. Deserving of capital punishment in a Red State. (See The Ten Commandments.) Think Wall Street in 2008.
ON COOKING SOUTHERN: Brisket and Latkes
Happy Chanukah, y’all! Chanukah (also known as Hanukkah) is the Jewish eight-day celebration of the festival of lights. The celebration always begins at sundown the night before the 25th day of the Jewish calendar month of Kislev, and since 165 BCE has commemorated the continuing existence of the Jewish religion. On that date, the Jews of Judea, under Judah Maccabee, successfully rebelled against their Hellenistic oppressors, led by the Syrian Greek King, Antiochus IV. The victorious rebels celebrated their freedom by rededicating the Temple and relighting the great Temple lamp. According to some historical stories, most of the Temple’s ritual oil had been profaned by the Greeks, and there was only one sealed container remaining. Out of faith, they lit the lamp anyway, and for eight days (the length of time required for preparing new oil), the container was full of oil.
This year’s Chanukah starts at sundown, Saturday, December 8, and runs through December 16. Folks celebrate the start of Chanukah by lighting the first candle on the hannukiah (also known as the menorah), and by adding an additional candle each night. Prayers of thanks are read during the gatherings, and the children play games in which gifts or gifts of money or gold-foil wrapped chocolate coins (called gelt) are exchanged. A highlight each night at the family meal are foods cooked with oil. Favorite main dishes include a brisket pot roast or a roasted chicken.
RECIPES OF THE WEEK
Slow Cooker Brisket 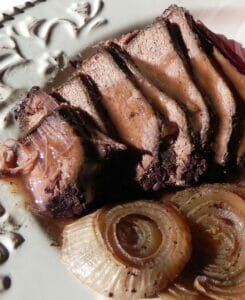 The Old Bride recommends using a slow cooker for creating succulent pot roast of any type, but especially for cooking smaller portions of brisket for immediate family. Brisket is one of the butcher’s nine prime cuts of beef. It comes from the cow or steer’s chest. A brisket consists of two distinct muscles: (1) the long flat muscle that comes to a point and is called the flat; and (2) the thicker, fattier muscle that is oval shaped and called the “point.” The two parts are separated by a cap of fat, and the muscles are laced with connective collagen that make the meat tough unless cooked slowly. One may purchase either a smaller trimmed portion of a brisket or the “packer’s cut” whole brisket, which is a huge chunk of meat, about 8 to 16 pounds.
The science behind cooking brisket properly is to maintain a moist heat environment while cooking to break down the collagen of those connective tissues into gelatin. This may be accomplished by boiling; by foil-wrapping the meat to create “steam” while baking in the oven under low heat; by cooking in a slow cooker; or by roasting over coals, while frequently basting with a marinade. The preferred cut for Texas-style barbecue and for many Jewish family get-togethers, this cut of meat also has international connections. It’s a favored meat in Hong Kong, Korea, Thailand, Vietnam, Mexico, and the U.K. Think corned beef, smoked pastrami, Viet pho soup, Chinese noodles and beef, or a Thai suea rong hai grill!
3-1/2 to 5 lb cut of brisket (small enough to fit into a large slow cooker)
Garlic dipping olive oil
Sea salt
Garlic powder
Black pepper
1 medium yellow onion, sliced 1/8-inch thick
1 to 1-1/2 c full bodied, dry red wine
2 to 3 T of all-purpose flour
Rinse and pat dry the brisket. Place in the slow cooker. Rub all over with garlic-dipping olive oil. Sprinkle all sides and edges with the seasonings, in the order listed. Position fat side down. Place three to four slices of onion across top. Drizzle onion with the olive oil and seasonings. Measure the wine and pour around the meat (not over it). I used an Argentinian 2010 Malbec from Layer Cake (Mendoza) for this particular brisket. (Of course, the rest of the wine must be drunk with dinner.)
Set to cook for 10 hours. Baste with pan juices at hour five. When done, remove brisket and onions to a serving platter to rest before cutting. Make gravy by bringing the pan juices to a boil in a skillet, adding a bit of water to work to loosen the fond (those flavorful crusty bits that cling to the pan) with a wooden spoon. Put flour into a cup; stir in warm water to make a loose paste. Pour in a slow stream into the boiling pan juices, whisking vigorously to prevent clumping. Whisk until juices thicken, then remove from heat.
Potato Latkes
Consider these our Jewish pancake cousins to hash browns at breakfast or dinner. Latkes may be made with grated root veggies or sweet potatoes, but most often are made with Russet potatoes. Russets contain essential starch needed to hold the patties together during frying. The best latkes are crunchy on the outside but soft on the inside. Serve hot with a condiment of applesauce or sour cream (dairy is permissible under Kosher laws when not served with meat). Southern variations may include cayenne, bell pepper or green chilies, and mayonnaise blended in with Cheddar.
2 lb Russet potatoes, peeled, placed in ice-cold salted water
1/3 c grated white onion
2 eggs, lightly beaten (1 egg per lb of potato)
1 c plain flour, or 1/2 c matzo meal
1 tsp table salt, plus more to taste
Fresh ground black pepper to taste
Peanut or vegetable oil for frying
Line a large baking sheet with paper towels. Preheat oven to 200˚F. Fill large bowl half way with iced cold water. Grate peeled potatoes with box grater or food processor. Fine grating makes dense latkes; coarse grating yields lacy latkes with crispy edges. Transfer grated potatoes to iced water and set aside for 5 minutes. Drain in colander, rinsing with cold water. Place drained potatoes into a piece of cheesecloth and squeeze out excess water. Place into clean bowl and mix in remaining ingredients. If using matzo, let sit 5 minutes after mixing.
Pour oil into heavy frying pan up to about 1/2-inch deep. Begin heating to 350˚F. Use two tablespoons to form latkes patties by scooping generous amount of mixture onto one spoon, then flattening lightly with rounded side of second spoon. Slide gently into hot oil in skillet. Repeat until skillet is full but not crowded. Fry until edges are browned, then gently turn over and cook until fully browned. Transfer finished latkes onto baking sheet to drain. Warm in oven until ready to serve. Fried latkes may be frozen after cooling to room temperature.

Oxford restaurants adjust to inflation, other pressures by raising prices