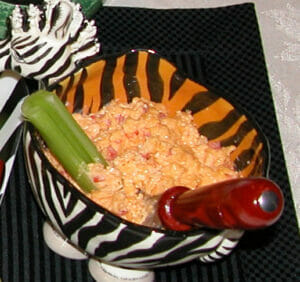 Pleasure your palate with the ‘Pâté of the South’

High on the Hog: A Southern state or condition. Living large, alluding to the costlier cuts of our favorite local meat source: Pork cuts above the belly, such as the loin; not the lower cuts, such as pork belly, hocks, jowls, feet, knuckles. (Think all Ole Miss fans following our January 5 Compass Bowl win over Pitt.)

PIMENTO CHEESE, Pâté of the South

Scratch a Southerner and you’re apt to find the DNA of all sorts of genetic and cultural ethnicities. This extends to our food. Southern cuisine is a flavorful gumbo of every good edible that EVER passed through our land. One of our most cherished “Southern” foods, pimento cheese (PC), is a perfect example. Although we like to think this is a true dish of Dixie, pimento cheese dates back to the post-Civil War days of the 19th century when a couple of Yankee entrepreneurs in New York State developed an American version of Neufchatel.

This “new” cheese, wrapped in foil and sold in tins, morphed into cream cheese around 1900. Around 1903, the Phenix Cheese Company of New York City bought the trademark for Philadelphia Brand Cream Cheese. This company merged in 1928 with the James Lewis Kraft Cheese Company, and the rest is history.

The cream cheese evolution coincided with what Southern food historian Robert Moss calls a feminine domestic-science movement “to bring order and scientific precision to all aspects of the home, most particularly the kitchen.” Centered at the Boston Cooking School, the domestic science movement’s leaders wrote articles and created recipes designed to organize the kitchen into home economics. They jumped on cream cheese and Neufchatel as noble examples of industrialized food products, and began pairing the cheese with another product that had been lurking since the 1880s — canned sweet Spanish peppers called pimientos.

Pimiento (a Spanish spelling used interchangeably with “pimento”) pepper is a red cherry pepper (Capsicum annuum, a member of the nightshade family), sweeter and more aromatic than red bell pepper. The pimiento pepper is rich in vitamins A and C, and the capsaicin “heat” that helps reduce arthritic swelling of joints. This pepper was yet another native New World food introduced into Spanish culture by Christopher Columbus himself. It became a staple of Spanish cuisine and in the cultures of Hungary, Morocco, and the Middle East. By around 1900, this pepper had become an American food favorite because of its mild, sweet flavor, and ease of canning. The pepper became a successful farm crop in Georgia for a time. Moody Dunbar Company in east Tennessee continues to be the major producer of those special 2- and 4-ounce jars of canned pimento.

One of the first documented sandwich recipes combining cream cheese and pimento to appear in print was in Good Housekeeping in 1908, and by around 1910 commercially made pimento cheese hit the market… in the Midwest! The Asheville, NC, Queen of Appalachia Cookbook in 1910 included a pimento cheese sandwich recipe. The new product spread rapidly across the country. By early summer in 1910, 15-cent jars of the stuff were being advertised in Montgomery, AL, and Columbia, SC, and a special of two jars for 25 cents was promoted in Augusta, GA, home of the Masters Tournament, which became famous not only for golf, but for its green paper-wrapped pimento cheese sandwiches.

Popularized during the Depression as a cheap source of protein, pimento cheese consisting of shredded cheddar, mayo and pimentos became the go-to lunchbox product for Carolinas textile mill workers, who were encouraged to eat on the job. Food writer Emily Wallace documented the trend in her 2011 UNC-Chapel Hill master’s thesis, noting that as early as the 1940s, an entire industry of small sandwich vendors developed to service Southern manufacturing workers. Eugenia Duke, founder of Duke’s Mayonnaise, and other Southern entrepreneurs ensured that PC remained a staple of the drawing room AND the streets, as they sold PC sandwiches in mills and in tea rooms. Somewhere along the way folks began dropping the second “i” in pimiento, and Southerners often referred to it as menta.

Other parts of the country eventually discarded PC in favor of cheese whiz, but we Southerners embraced it. Today, all self respecting Southerners keep a tub of PC in the fridge. We’ll stuff anything with pimento cheese, including cherry tomatoes, celery ribs, hamburgers, hot dogs, baked potatoes, and, of course, sandwiches. We’ll mix it into anything else, including mac-n-cheese, chicken casseroles, potatoes au gratin, grits, biscuits, and rolls; and we’ll even use it to coat things we intend to fry, such as dill pickles. And when we’re feeling a bit peckish but don’t want to put together a whole meal, a little PC grilled on toast will make do.

ALWAYS use top grade mayonnaise such as Duke’s, Hellmann’s, or homemade

ALWAYS use a pinch of cayenne pepper for kick

NEVER use pre-shredded or processed cheeses, which contain fillers

2 T up to 1/4 c fine-chopped sweet onion, juice squeezed out

1/2 to 1 tsp cider vinegar or Worcestershire, to taste

1 T white granulated sugar, OPTIONAL (I use it except when prepping the PC for inclusion in casseroles, grits, or chicken)

Combine all ingredients in bowl and mix with fork. If smoother and creamier spread is desired, use hand mixer to blend. Store, covered, in fridge overnight before serving. Remains good for several weeks. 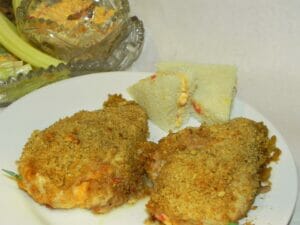 This recipe works best with spicy homemade pimiento cheese or chunky artisanal pimento cheese without sugar. Some PC will drip onto the pan during baking.

1 c crushed garlic and butter croutons (I use Marie Callender)

8 toothpicks (don’t use the colored ones, which wick color onto the chicken)

Combine the crushed croutons and chopped pecans; set aside. Cut a deep pocket into each chicken breast by slitting the middle from the thickest side. Leave at least 1/2 inch uncut all around the edges. Use a teaspoon and place up to 5 tsp of pimento cheese inside each slit, pushing and pressing with fingers to evenly distribute in the pocket. Close each pocket with two toothpicks. Whisk the egg. Brush each breast all over with the egg. Smear 1 T Dijon mustard over each breast. Dust heavily with the crumb and pecan mixture. Sprinkle lightly with salt. Position the stuffed breasts, not touching, on a 9×13-inch pan sprayed with cooking oil. Bake for 30-45 minutes on middle rack in oven preset at 375˚F until breast juices run clear when pierced in the center. Serve with steamed basmati rice.