Sweet Endings For Your Valentine’s Day

In High Cotton: Equivalent of “Sittin’ pretty,” as in doing well, or being well off. Think the Ole Miss Rebels after the 2013 football National Signing Day (Thanks to Hugh Freeze and company!)

It’s that time of year when our favorite politically incorrect (aka not healthful) southern cake is showing its true colors everywhere. You know the primary color – it’s red; the brighter, the better. I’m talking about Red Velvet Cake, which in its various incarnations has become synonymous with decadent Southern sweets laden with shortening and food coloring. But like many other dishes, this recipe originated elsewhere in the national scene. We simply perfected it, claimed it as our own, and now honor special occasions with Red Velvet whoopie pies (sandwich cookies), cupcakes and cheesecakes, as well as the towering cakes.

So where did it all begin? Velvet cakes were first noted during the 19th century. Dr. Alvin Wood Chase’s 1873 “receipt” book in Ann Arbor, Michigan, contained velvet cakes, referring to cakes with velvety crumb texture. The Good Things to Eat Cookbook of 1885, published in Chicago, contained recipes for Velvet Cake, as did The Boston Cooking-School Cookbook of 1896. Most were butter cakes containing buttermilk, and some contained cocoa.

By 1910 the term velvet referred to any cake containing a fine crumb, and the red referred to red sugar or anything containing brown sugar. The crossover to Devil’s Food Cake is noted as early as 1902, in a chocolate version of Velvet Cake. Red Devil’s Food cake of the time referred to brown sugar and dark cocoa. NOTE: Cocoa powder at that time was unprocessed, and its natural anthocyanin pigment turned reddish when combined with acidic buttermilk and vinegar. Modern “Dutch processed” cocoa does not turn colors because it has been treated to render it chemically neutral.

Our own 1910 Oxford-University Methodist Church community cookbook contained a number of cake recipes such as Silver Cake, Mahogany Cake, Velvet Cake, and Red Cake. And a recipe for Philadelphia Red Cake was included in The Perry Home Cook Book in 1920, suggesting a direct connection between Devil’s Food and Red Velvet Cake. The 1920 recipe is identical to a modern recipe for Red Devil’s Food Cake.

According to award-winning pastry chef Stella Parks (a Southerner), of Table 310 in Lexington, KY, and author of “The Unknown History of Red Velvet Cake,” the Red Velvet name was more of a flourish than a color wheel reference until the Great Depression. That’s when John A. Adams began promoting his Adams Extract Company products in the Midwest and South under a color photo of a VERY red Red Velvet Cake. The company, located in Texas and with ties in Michigan, offered free copies of the cake recipe with every purchase of Adams Best Vanilla, Adams Butter Flavor, and every two bottles of red food coloring. Mr. Adams’ marketing ploy worked. Red Velvet became the new favorite cake for Southerners in particular, although Canadians liked their version on the menu at the restaurants and bakeries of the Eaton’s Department Store chain.

Numerous legends have arisen about Red Velvet Cake. The most popular legend to this day is the one about the Waldorf Astoria cake version. Allegedly, the swanky hotel charged a client $350 to send her a copy of their Red Velvet Cake recipe. Outraged, the customer is said to have printed up 3-by-5 cards containing the recipe and handed them out en mass, and the Waldorf Astoria Red Velvet Cake (containing red beets) became known as $100 cake or $200 Cake. Fact or Myth? It’s an urban myth. What is a fact is that Southerners generally do NOT add beets to our Red Velvet Cake to create the red color, even though too much Red Dye No. 40 is potentially hazardous for our health.

By 1972, when James Beard wrote about three different types of Southern-mainstay Red Velvet Cakes in his American Cookery book, the cake had become a Southern star, loved for its extravagant usage of butter, shortening, cocoa, buttermilk, and vinegar, frosted either with a rich roux-based white icing known as Ermine or Snow White Icing, or with cream cheese frosting. Of course, only we Southerners could transform this once innocent cake recipe into the truly tacky. Think Armadillo Groom’s Cake and the 1989 movie, Steel Magnolias. Gotta love it. 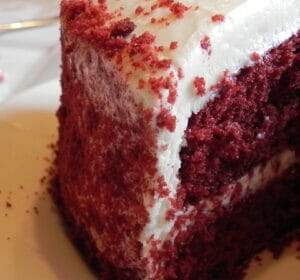 Preheat oven to 350˚F. Grease and flour three 8-inch pans. Cream together the shortening, sugar, eggs, vanilla, and butter. Combine cocoa and food coloring in a small glass or metal bowl. Mix it into a paste and add to creamed mixture. Mix salt, vinegar, and soda together and add to buttermilk in a small bowl. Alternate adding flour and the buttermilk mixture into the creamed mixture, beating well after each addition. Pour into prepared cake pans. Bake 20-25 minutes. Cool on a wire rack for 10 minutes, and turn out onto floured cloth on rack. Cool completely before frosting.

Use cream cheese frosting if you can’t tolerate gluten. This is a butter cream frosting using the gluten in flour and the casein in milk to create a suspension emulsion. The Snow White Frosting variation calls for blending in shortening.

1/4 tsp table salt or a pinch of Kosher salt

1 tsp vanilla extract (clear vanilla is preferred, but not required)

Whisk flour into milk and place over medium heat in small sauce pan. Cook, whisking, until thickened (drizzling the mixture over the surface will leave lines briefly before they “melt” back into the mixture). Remove thickened flour mixture from heat and whisk in salt. Pour into a bowl to stop cooking. Cover with plastic wrap touching surface to prevent surface crust. Refrigerate for 1 hour while creaming butter and sugar with mixer until fluffy. Add vanilla to creamed sugar and mix thoroughly. Begin adding the cooled flour and milk with mixer running on medium speed, adding about 1 tablespoon at a time. The icing will be extremely light and fluffy, and should look slightly curdled before spreading onto the cake. Refrigerate the cake just as you would with cream cheese frosting.

The Whoopie Pie may have originated in New England, but the Pennsylvania Amish and Moravian settlers brought them down to the Southern Appalachians, where Tar Heel and Volunteer cooks embraced the convenience and good flavors of these cake-like cookies sandwiched with creamy filling. Feel free to use marshmallow cream or ermine icing as a filling for this whoopee pie, instead of cream cheese filling.

Preheat oven to 350˚F, with rack in center. Line two cookie sheets with parchment paper. Combine in a bowl the dry ingredients, and whisk together until completely blended and all one color. Beat the butter, shortening and both sugars on low to medium speed until combined, then on high till fluffy. Add the eggs, one at a time, beating well. Add vanilla and food coloring, beating on low to avoid splashing, then on medium until just blended. Mix in half the flour and half the buttermilk, beating on low to medium, scraping down the sides. Add remaining flour and buttermilk and beat until completely blended.

Use medium cookie scoop (scoop measures 1-1/2 inches across) to drop batter onto prepped sheets, in four rows of three scoops per row, evenly spaced apart. (Scoop should be full but level). Bake one sheet at a time on center rack, about 7 to 10 minutes, until cakes spring back when pressed lightly with finger. DO NOT OVER BAKE. Remove from oven and cool 5-10 minutes before transferring to wax paper on rack. Scrape off cake crumbs from the parchment paper, turn it over, and reuse. YIELD: 36 cookies, for a total of 18 whoopie pies.

Beat cream cheese and butter until smooth, add sugar, beating on low until combined, then add vanilla and increase speed, beating until creamy and smooth, about 4 minutes. Spread thin flat layer of filling on flat side of one cookie. Top with second cake, flat-side facing filling. Store up to 3 days in airtight container in fridge, with waxed paper between layers to prevent sticking.