Tupelo group is a collective of instrumentation, brought together for a good time

On the porch in the frigid sunshine, sharing a pizza pie, this group appears to have little in common, aside from the goosebumps. To my left, sits bassist Seth Parker, bearded and burly with shaggy locks. Slightly to the right, there’s drummer Dayton Cooper in a cockily flipped up flat-bill, hiding an eager smile behind colorful Ray-Bans. Then, there’s James Franco’s younger brother (not really, but there is definitely a resemblance) tagging along for lunch as a stand-in for guitarist Hunter Covington, who was busy with his cosmetology day job. And to my right, front man Michael Thomas, trimmed and bespectacled, looking like he stepped fresh out of a Gap catalog.

Earlier this week, this eclectic bunch took the stage—err…floor—at Ajax Diner to deliver an energetic performance of revived classics from the likes of Steve Miller Band and Johnny Cash with a smattering of contemporary tunes such as Foster the People’s “Pumped Up Kicks” and original works in a cohesive blend of toe-tappin’ rock. Driven by a funky rhythm section and smoky, soulful vocals, the band showed off an impressive range of sound, a repertoire which I was later told includes anything from Blackstreet’s rap anthem “No Diggity” to the country favorite “Wagon Wheel.” But don’t be mistaken, The Bonfire Orchestra is not some run-of-the-mill cover band. Each song played was an inspired rendition that was crafted distinctly their own. The band hopes that by incorporating such familiar sing-a-longs, they’ll be able to introduce original work to an eager fan base. They’re doing a good bit to continue that quest today; their video for “Bombs” was screened this afternoon at the Oxford Film Festival and was nominated for Video of the Year, and they perform tonight at Two Stick Sushi Bar around 10 p.m. 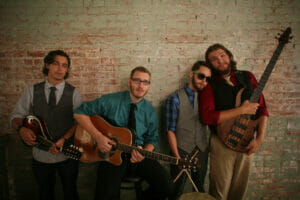 “There’s a certain amount of Tom Petty you’ve gotta play to be successful. We don’t sit around at home playing ‘Last Dance with Mary Jane’ all the time, but if it gets them back, it’s worth it,” Thomas said. “Have something to say, but don’t take yourself so seriously that you can’t dance.”

Singer songwriter Michael Thomas began as a solo act, quickly realizing however, that acoustic performance appeals to a very limited audience. He paired up with Cooper, and since, the duo has collaborated with a diverse assortment of musicians. Going around the table, AC/DC, Bassnectar, and Portugal the Man respectively are mentioned as influences. It would seem that such a disparate collective would fail in the face of such irresolvable aesthetic preferences, but what is most impressive is the respect and love shared by this group (there may have been a Lady and the Tramp moment over the last piece of crawfish bread). At the heart of their ever-evolving sound is a deep appreciation for music that transcends genre-defined boundaries.

“We’re all musicians, and we’re growing together,” Thomas said.

The group plans to broaden their show circuit and have been invited by the U.S. State Department to participate in an international tour as cultural diplomats and representatives of the sounds of the Mississippi Delta through the American Voices program, which spans more than 100 countries on five continents with the aim of connecting global citizenry through the arts, music, dance, and theater. The group has also been asked by local artist Danny Klimetz to play in an unplugged episode of the Oxford Sessions, which will be filmed this spring at Rowan Oak.