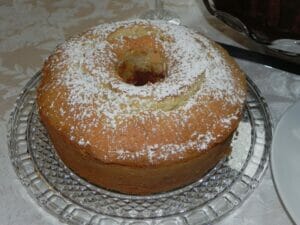 For rich flavor, pound it home

Lower than a boll weevil: As low-down-dirty, sneaky, underhanded and rotten as a person can get. The boll weevil did more damage to the South than General Sherman in his march to the sea. Think “Do Nothing” Congress. … Sequestration anyone?

The term buttermilk refers to the fermented milk popular in warm climates around the globe, from India and Pakistan to the Middle East and the Southern United States, where unrefrigerated milk sours quickly. Old cookbooks refer to “sour milk” versus sweet milk when referring to buttermilk.

The term originally referred to the liquid remaining after churning the butter out of cream. The unique, lowfat, acidic properties of buttermilk make it an ideal ingredient in baking. The lactic acid in buttermilk reacts with leaveners such as baking powder by creating little bubbles that “lift” dough or batter. That’s why buttermilk biscuits are flakier and lighter, and why buttermilk cakes and breads are smoother and creamier. The natural acidity of buttermilk also makes it the ideal tenderizer and marinade for meats such as chicken, pork and lamb. That’s why Southern fried chicken is so juicy and tender – because it’s been soaked first in buttermilk.

We developed our regional love affair with buttermilk in the good ol’ days before refrigeration, when settlers and farmers discovered that buttermilk left sitting out would ferment, extending the “shelf life” of the unrefrigerated milk. That version is still referred to as “traditional buttermilk.” Whole, traditional buttermilk is similar to yogurt, but is rarely available through commercial stores anymore.

Modern commercial milk production involves removal of all the fat from raw milk, then re-introduction of fat in amounts that meet industry standards for fat-free, 2-percent, or whole milk. This homogenization process and high-temperature pasteurization of the milk eliminate the possibility for creating old fashioned buttermilk. Nowadays, consumers are offered low-fat cultured buttermilk or Bulgarian buttermilk. Both styles are created by fermentation of bacteria cultures introduced into the milk.

The term “cultured buttermilk” refers to fermented dairy product produced by culturing cow’s milk with either Streptococcus lactis or Lactobacillus bulgaricus. These introduced cultures create lactic acid while fermenting lactose, the primary sugar in milk. As the bacteria produce lactic acid, the milk pH decreases and the primary milk protein called casein is created. The casein causes the milk to curdle (also known as clabber), which is why buttermilk is thicker than plain milk. Bulgarian buttermilk is made by supplementing or replacing the milk cream cultures with yogurt cultures, and fermenting it at higher temperatures to create more acidity (meaning, more TARTNESS). Containing 3.25 percent fat,

Bulgarian buttermilk is creamer, tangier, and thicker than low-fat buttermilk, which contains 2.5 percent fat. Think of it as the buttermilk equivalent of Greek-style yogurt versus regular yogurt.

Buttermilk is an excellent substitute for milk or cream in many recipes, adding a tangy tartness. But never add it to boiling liquids, and temper it first when adding to any warm dish because buttermilk curdles more easily than plain milk. Buttermilk always has a short “sell by” date, but I have found that it will keep in the fridge as long as two weeks after the “sell by” date.

Buttermilk should be shaken well each time before using. Buttermilk does not freeze well. Buttermilk combined with heavy cream and left out at room temperature for 8 to 12 hours transforms into “crème fraiche,” a fantastic sour cream or yogurt substitute.

If your recipe calls for buttermilk, but you have none, there are three easy and quick ways to create a buttermilk substitute. Each version may be used interchangeably in the recipe.

Lemon or Vinegar and Milk Substitute

Milk and Cream of Tartar Substitute

Combine the cream of tartar first with 2 T of the milk to make a paste and remove lumps. Stir into the remaining milk until smooth.

Pound cake is one of those sweet treats maligned by children for its lack of gooiness, but loved by adults for its subtle, dense richness and its functionality as a platform for supporting tasty sauces, icings, glazes, and assorted fruits. Pound cakes date back to a time in the early 1700s when British cooks developed a no-yeast, cakey bread based on pound weights of flour, butter, sugar, and eggs.

English immigrants and vendors brought their pound cake recipes to America during the colonial period, and by the last part of the 18th century, cookbooks for Colonial housewives included various versions of pound cakes. Perhaps the most famous early cookbook published in America was by Eliza Smith. The Compleat Housewife was first published in London in 1727, then published in Williamsburg in 1742 for American colonists, and reprinted numerous times subsequently. Smith’s cookbook contained an English “Shrewsbury Cake” and an “Ordinary Cake to Eat with Butter” that are versions of pound cake.

Fellow Brit Hannah Glasse also cultivated a Colonial following for her 1747 cookbook, The Art of Cookery Made Plain and Simple. Glasse included a recipe for “Little Cakes” made with a pound of flour and a half pound of butter in her cookbook. Martha Washington’s Booke of Cookery and Sweetmeats was a journal-type manuscript handed down by one of her 17th century ancestors to succeeding generations of brides. Martha maintained the journal between 1749, when she married first husband Daniel Custis, and 1799, when she gave it to her granddaughter Eleanor Parke Custis. Martha’s cookbook contained over 500 recipes, including her family’s version of pound cake. American Amelia Simmons included pound cake in her popular cookbook, American Cookery, published in Hartford, CT, in 1796.

Mary Randolph, related to most of the first families of Virginia, also included a recipe for pound cake in her cookbook, The Virginia Housewife, published in Washington, DC, in 1824. According to Virginia folklore, Mrs. Randolph spent three fortunes on cooking before the family fell onto hard times (and the Old Bride can believe THAT). But those cooking skills kept Mrs. Randolph’s family afloat when she became a successful boarding house matron in the Capital City.

Grease and flour a 10-inch tube pan. Preheat oven to 350˚F. Sift flour, soda and salt together and set aside. Beat egg whites until they form stiff peaks and set aside. Mix butter and sugar until fluffy in a large bowl. Mix in egg yolks until creamy. Add in flour and buttermilk, alternating, until well blended. Mix in vanilla. GENTLY FOLD IN the stiff egg whites with spatula, always folding in the same direction, until well mixed. Pour into tube pan and smooth out with the spatula. Bake for 1 hour and 5 minutes, or until toothpick inserted into top of cake comes out clean. Do not over-bake. Remove to rack to cool for 30 minutes. When ready to turn out, run a sharp knife around the edges to loosen before flipping. Thump once or twice on bottom of pan. Works well with lemon curd, raspberry sauce, fresh strawberries, or chocolate sauce. 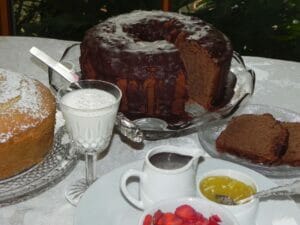 This is a very dense cocoa pound cake. Even if you drizzle chocolate icing over the top, this pound cake needs fruit or creamy sweetness such as custard, ice cream, lemon curd, strawberries, kiwi, or raspberries to complement.

Grease and flour a 10-inch tube pan, greasing up the sides about 2 inches. Sift all dry ingredients together two times and set aside. With mixer set on high, combine softened butter and shortening. Add sugar, and mix until fluffy. Add in eggs one at a time, mixing on medium speed until fluffy. Alternate adding flour and buttermilk, mixing until blended. Beat in vanilla until blended. Pour into prepared pan (use spatula). Bake at 350˚F in preheated oven for 1 hour and 5 or 10 minutes. Check cake doneness by sticking toothpick into center; bake a bit longer if needed. Remove to rack to cool about 20 minutes. Turn out onto wax paper-covered rack to continue cooling for 1 hour before placing on cake plate. Drizzle with glaze of choice.