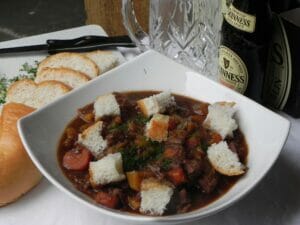 This St. Paddy’s Day, try the potluck o’ the Irish

Shirt-tail cousins/shirt-tail kin: Someone who is not closely related to you, or who might only be related by relationship to folks who married into your family. Think Cousin Isobel Crawley and Lord Grantham in Downton Abbey. Different from kissin’ cousins, which refers to distant blood relatives it’s not against the law to marry.

THE SOUTHERN AND IRISH CONNECTION

America is a Heinz 57 nation composed of many races and nationalities. But scratch any American, and we’re likely to claim at least a drop of Irish or Scots-Irish heritage if our families came here before World War II. This self identification as “Irish” or “Scots-Irish” is rooted in fact: Self-identified Irish and Scots-Irish Americans comprise our country’s second largest ancestral group, behind only German Americans. The percentage is higher in many Southern communities.

Almost 12 percent of America’s population is descended from those hale Celts who came here as indentured servants during the great migrations that occurred during the 1600s and 1700s, throughout the 1800s (particularly during the potato famine years of 1820-1860) and during and after the Irish rebellions until 1921). The percentage is higher in many Southern communities. By 1910, there were more people of Irish heritage in New York City than in the entire city of Dublin. In fact, our current “Irish” population in the United States is six times greater than that in Ireland!

Immigrants who arrived in the 1700s from the Irish province of Ulster have had the strongest cultural impact on the South. Later known in America as Scotch-Irish, they were descendants of Scottish and English tenant farmers who had been settled in Ireland during the 17th century “Plantation of Ulster” by the British government. The Plantation of Ulster was the organized colonization of land that had been confiscated by the British government from the O’Neills and the O’Donnells as part of the pacification of Ireland.

However, the 1704 Test Act required all citizens who were serving as Crown officials, in the military, or in civil municipal or education service to be Anglican. Scots-Irish tended to be heavily Presbyterian. At the same time, repressive trade laws went into effect and earlier colonization rent rates were hiked just when droughts and animal and human disease were taking a toll.

Approximately 250,000 of those beleaguered Ulster-Irish came to America, many arriving in New England and making their way to the colonial back country of Pennsylvania, a Quaker-run colony tolerant of differing religious beliefs. Gradually, they made their way on down the Southern Appalachian Mountains into Virginia and the Carolina Piedmont. They continued onward, following the “Great Wagon Road” covering the 600 miles that linked Pennsylvania to Georgia. Those Ulster Irish became the primary cultural group in the Appalachians, the Carolinas and Virginia. Their descendants led the westward movements into Tennessee, Kentucky, Arkansas, Missouri, and Texas, and were at the front during every major skirmish, conflict, or exploration in American history.

While the Scots-Irish were going westward, Irish Catholic immigrants were flocking to the Northeastern cities of Boston, New York, and Philadelphia, and also settling in Catholic communities of Charleston, Savannah, and New Orleans, which had always been important ports of arrival for the immigrants. Irish Catholic immigrants also traveled up the Mississippi to Memphis and St. Louis, settling in Chicago, and other larger Midwestern cities.

All Americans are “Plastic Paddies” on March 17. Our St. Patrick’s Day (which is a high holy Catholic holiday in Ireland) is a national American EXCUSE of a holiday. It is our day to celebrate all things Irish with a pint of stout or ale in one hand and a spoonful of Irish Stew or colcannon in the other. And, of course, we’re all wearing Kelly green.

Colcannon traditionally was made with cabbage and potatoes. Experiment with the leafy green of your own choice.

Preheat oven to 350˚F and grease an ovenproof, 8-inch-square dish. Peel and slice the potatoes, cover in salted water and boil until fork-tender. Drain thoroughly, place back into pot, add 3 T butter, and mash, but leave somewhat lumpy. Mash in the buttermilk, to bring to a stiff but spreadable consistency.

Wash greens, pat dry, and strip from center veins. Chop into chiffonades (thin strips); you should have about 8 cups of chopped raw greens. Bring garlic dipping oil to a sizzle in large skillet on medium heat. Stir in the minced garlic with wooden spoon and sauté about 2 minutes. Stir in chopped greens, folding several times with large spoon to get all the garlic bits off pan edges.  Add salt and stir gently, just to combine. Cover and simmer about 5 minutes, stirring occasionally. Stir in butter when greens have turned dark and cooked down, just before sticking to the pan. Squeeze lemon juice over greens, and turn burner to low. Stir in the crumbled bacon.  Add OPTIONAL nutmeg if desired (I don’t use it). Simmer for about 1 minute, turn off burner, and cover pan to retain steam and heat.

Spread a very thin layer of greens on bottom of greased pan; cover with thin layer of mashed potatoes. Repeat, ending with layer of potatoes on top. Transfer to oven and bake about 15-20 minutes.

VARIATION 1: Stir potato mash and cooked greens together before baking in a round corning bake dish.
VARIATION 3: Serve without baking, by mounding the potatoes and topping with a large spoonful of greens.

Heat olive oil in large stockpot over medium heat. Add meat and brown on all sides. Add garlic and onion, and sauté about 5 minutes until onion is translucent. Stir in celery, carrots and cabbage, sautéing another 10 minutes until mixture wilts and begins to caramelize. When liquids have begun to glaze pot, add beer, stirring to deglaze pot. Cook until liquid reduces by half, about 30 minutes, Add stock liquid, potatoes, salt, and pepper, Stir to blend and raise heat to high to bring it to a boil. Once boiling, reduce heat to low, cover, and simmer about 2 hours, stirring occasionally to prevent potatoes from sticking. Just before serving, stir in chopped dill. Ladle into bowls or mugs and top with several cubes of crusty bread and a garnish of dill.

Oxford restaurants adjust to inflation, other pressures by raising prices