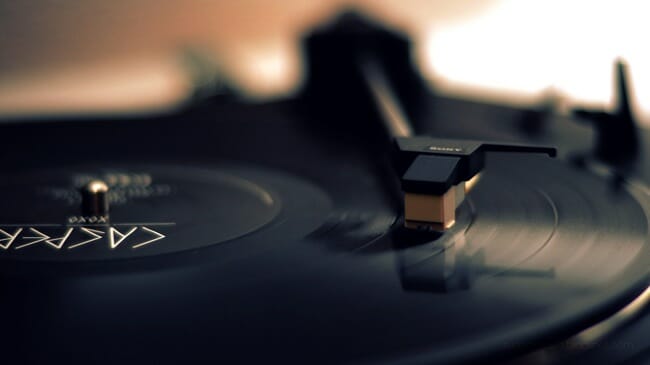 By Joseph Katool, Student, the Meek School of Journalism and New Media, the University of Mississippi

The End of All Music, Oxford’s only vinyl record store, recently celebrated its first anniversary of capitalizing on a music industry trend.

“Sales of vinyl have definitely increased, if only because people want a tangible copy of things,” said Jimmy Cajoleas, an employee at the shop, located at 1423 North Lamar. “On a basic level, it looks cool, and it’s fun to collect.”

Cajoleas maintains that it’s not fun to collect MP3s.

“Most people don’t really like to think of their music as little bits of data inside a computer. They want something tangible that they can touch and they can hold.”

According to the Nielsen Company and Billboard’s 2012 Music Industry Report, digital music sales jumped 14 percent while the sales of physical formats such as CD and cassette plummeted nearly 13 percent as compared to sales in 2011. Despite the growing domination of digital music formats, sales of vinyl records have risen nearly 18 percent.
The resurgence of vinyl has also resonated locally, and Ole Miss students are frequent customers at the End of All Music.

“I started collecting records my freshman year,” said Ole Miss junior Michael Woods. “I liked the way they sounded a lot, and I enjoyed the actual physical act of putting on a record. For me, it made the listening experience more active and less passive.”

Many who visit the store are first time buyers.

“I would say half, which has been really surprising for us. We’ve sold so many record players, and it’s mostly to freshmen, sophomores in college who think they’re cool, like to collect things. or I guess just want to own a physical copy of music,” said Cajoleas.

Unlike with most digital formats, the cost of records tends to fluctuate in price.

“For new releases, depending upon whether they are major labels or indie labels, the prices differ dramatically,” said Cajoleas. “Let’s say, a Bob Dylan double-disc will be around $45, whereas a smaller artist like Grimes, that record is maybe $15 or $16.”

Despite somewhat higher prices, some customers get hooked.

“I usually go and purchase a few records once a month, but I go looking more than once a week, and you know, if something, a gem, strikes me, then I just gotta heed my impulse and get it,” said Will Bedwell, an Ole Miss sophomore.

The question is whether vinyl will continue to gain in popularity or go the way of cassettes and CDs. Woods believes records are here to stay.