On Cooking Southern: Spinach and Sausage Gnocchi and Bruschetta

Keep it lighter with a Mediterranean twist

Carry on: To express oneself in an exaggerated manner, just shy of a hissy fit. This is the opposite of carrying on in the military sense of continuing what one was doing when stopped by one’s superior. A person could get confused if hearing the term out of context. Examples: We don’t need to carry on about getting tough breaks at the NCAA playoffs. We just need to carry on with what we were doing to get us this far and look forward to next year!

This week The Old Bride thought we all needed a change of pace after the frenetic activities of March Madness and Easter and Passover… not to mention the detritus remaining from our late-winter celebrations of Mardi Gras and St. Paddy’s Day (Lent doesn’t count).

I thought a bit of simple Mediterranean cuisine might be just the ticket. After all, folks around here have been embracing culinary traditions from Italy, Greece, Spain, and Portugal since those boys from the Old Country first claimed the New World for Isabella and Ferdinand.

Gnocchi (pronounced nyo-kee) are little pasta dumplings. This Italian pasta type dates back to Roman times, probably introduced from the Middle East. Gnocchi may be made from semolina, ordinary wheat flour, flour and egg, or flour, egg, and cheese, potato, breadcrumbs, or similar ingredients. Potato gnocchi date to the 16th century, when the potato was introduced from the New World to Europe. The dish came back to Brazil, Uruguay and Argentina, transformed by Italian, Spanish and Portuguese immigrants, whose descendants now eat gnocchi on the 29th of every month for good luck. Gnocchi usually are eaten as a first course or as an alternative to soups or pasta. They are served with melted butter, or seasoned with sage, pesto, or sauces.

Remove casings from sausage. Chop into slices and cut each slice into quarters. Gently clean and slice mushrooms. Bring 4 c of salted water to a boil in a medium saucepan. Drop in the packaged gnocchi and boil until gnocchi rise to the top. Drain in colander, reserving the gnocchi water.

Heat garlic-infused olive oil in skillet. Add fresh spinach and cover for a minute. Remove lid and stir in the sliced garlic, salt and pepper. Add chopped Italian sausage and white wine, stirring until ingredients begin to fuse and wine reduces by half. Mix in the cooked gnocchi and 1/2 c of the gnocchi water. Simmer about 5 minutes. Add mushrooms and stir gently until mushroom liquid releases. Sprinkle with shaved Parmesan, stir to blend, and serve immediately with a side salad and Laurie’s Bruschetta. 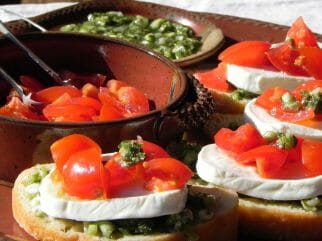 In Italy, where this antipasto was created in the 15th century, the word is pronounced broos-KET-A, although folks around the world acknowledge that we linguistically challenged Americans have taken to calling it brew-shet-uh.

The classic version consists of grilled crusty bread slices rubbed with garlic and topped with olive oil, salt and fresh ground pepper. Variations include toppings of spicy red pepper, tomato, veggies, beans, cured meats, or cheese. In the U.S., the topping itself, consisting of chopped tomatoes, olive oil, herbs and basil, is sold as bruschetta. My version is a combination of both versions, with a bit of Caprese salad thrown on top for good measure.

Loaf of French or Italian Bread

Roma, Campari, or Plum tomatoes, diced, with skins on

4 to 6 green onions, chopped with some of the greens

Slice bread on diagonal, approximately 1/2 inch thick. Place on cookie sheet and bake in oven on 350˚F until crisp, turning bread to crisp both sides.

Chop the basil leaves, onion, garlic, and green onion, and mix well in a small glass or metal bowl. Whisk in enough Parmesan to form a dry paste. Slowly add olive oil, whisking, until completely blended into the paste. Pour in a bit of vinegar at a time, whisking briskly, until oil and vinegar are completely mixed (rule of thumb is 1 part vinegar to 4 parts oil). Add salt and pepper to taste. If too pasty to spoon over toasted bread, add more oil and vinegar.