Feel warm and fuzzy with these peach-forward recipes.

Peachy (also peachy keen): Just fine. Great. Dandy. Swell. Wonderful. Arranged to satisfaction. A situation or state of being, as in “My life is just peachy right now — all the deadlines have been met, the children are self supporting, and the spouse is a happy camper.” Also used as a sarcastic statement, as in “Oh, that decision to merge the city and county school districts is just peachy for the children!”

PART ONE: The Nuts and Bolts of Peach Lovin’

Ahhhhh, Peaches. Our Mississippi peaches are HERE, and The Old Bride has been gorging for two weeks, experimenting with various recipes for cobblers and pies. (Watch for PART TWO later this week.) No more making do with South Carolina, Georgia or California peaches.

Here’s the scoop on peaches: The peach has been used in numerous cultures to symbolize happiness, endurance, riches, and speaking truth from the heart. A member of the rose family, in the same Rosaceae genus as the cherry and the plum, the peach a close relative of the almond tree. Peaches originated in northwest China, where the tree was first domesticated around 2,000 BCE. The fruit was so delectable that its cultivation spread to Persia, and reached ancient Greece and eastern Europe after good ol’ Alexander the Great conquered Persia in 331 BCE. European horticulturists later named the cultivar Prunus Persica, mistakenly believing the peach to have come from Persia.

The Spanish brought peach cultivars to the New World in the 16th century, and peach cultivation spread to France and England in the 17th century through the royal courts, as the English and French kings were exceedingly fond of the sweet fruit. Our North American colonies saw the first peach cultivars in the early 17th century, when horticulturist George Minifie brought them over for his Virginia Estate of Buckland. Thomas Jefferson had peach trees at Monticello, of course. Commercial American peach cultivation exploded in the 19th century, first in Maryland, Delaware, and Georgia, and later in Virginia.

The peach tree requires a climate that includes periods of chill (between 600 and 1,000 hours), which is why peaches are not a successful crop for tropical climes. Peach trees have a fairly short life span of about 12 years, and as all Southerners know, are sensitive to seasonal weather fluctuations such as too much rain, too little rain at the wrong time, too much cold, or too mild a winter. China remains the largest grower of peaches, followed by Italy and the United States, where California, Georgia, and South Carolina are our largest producers.

Peaches are classified either as clingstones or freestones, referring to whether or not the flesh of the fruit clings to the pit (also called a stone). Peaches also can have either white flesh or yellow flesh, The white-fleshed peaches have lower acidity than the yellow peaches. As a group, Americans tend to prefer yellow peaches.

Nectarines, by the way, are basically peaches with a recessive gene, even though marketed as a different fruit. Nectarines have an orange center while peaches have a whitish center. Nectarines have almost no fuzz on the skin, and contain more potassium and vitamins C and A than peaches.

Peaches and nectarines both have a very short shelf life, ripening almost while we watch. They freeze well, however, and The Old Bride highly recommends freezing them, sliced, with lemon juice or ascorbic acid (Fruit Fresh) in freezer bags, or floating in peach syrup, before they get to the mushy stage.

And don’t throw out those over-ripe or bruised peaches. They make the best jam, preserves, bread, cobbler, pie, and barbecue sauce.

How to Slice and Peel a Peach:

(Think avocados, only orange-yellow instead of that, well, you know… avocado green.) Cut the peach in half all around, along the peach “seam,” slicing down to the pit and around the entire circumference.  Twist the cut halves in opposite directions with both hands until the two halves separate, revealing the pit. Remove the pit and begin peeling and slicing.

To peel without slicing first: slice an X across the bottom of the peach to get the peach skin separation started. OR, drop peaches into boiling water and blanch for about one minute (remove and drop into cold water) to loosen the skin. This method works very well with firm or under-ripe peaches. 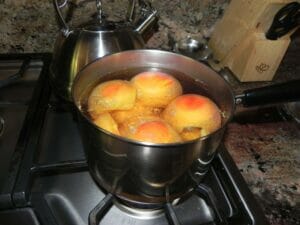 Peach stones are somewhat toxic; do not boil them to make syrup.

2 peaches, cut in half, unpeeled but pits removed

Combine equal parts of sugar and water, stirring to dissolve the sugar. Bring to a boil and drop in the peaches. Boil about 5-8 minutes, or up to 15 minutes if boiling a large batch. The water will turn pink. Allow to cool in the pot. Remove peaches and press through a strainer to extract juice. Remove skins from pressed pulp and freeze or refrigerate pulp to use as jam. Return the juice to the syrup water. Strain syrup to remove any pulp. Refrigerate or freeze syrup until ready to use in tea, alcoholic beverages, or prepared foods. NOTE: For beverages, it is permissible to make “diluted” peach syrup by combining 3 parts water to 1 part sugar; for instance, 6 c water, 2 c sugar, and 3 peaches. 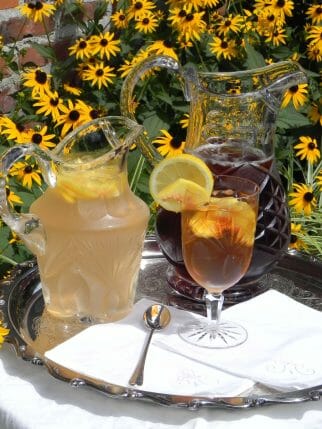 I prefer to keep the Peach Simple Syrup and steeped tea in separate pitchers, combining the two to the individual’s taste, in ice-filled glasses.

Stir a pinch of baking soda into the unsweetened tea to cut the bitterness. Add ice, peach slices, and a slice of lemon. Combine peach syrup with unsweetened tea when ready to serve. VARIATION: Combine the syrup and tea ahead, and add a small amount of almond extract.

Cooking oil such as olive oil or grapeseed oil 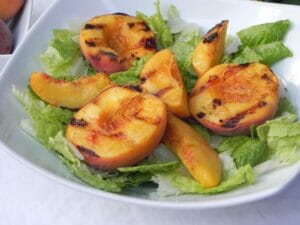 Slice into large wedges, or simply cut peaches in half. If grilling peach slices, remove the skin first. Lightly brush the cut side(s) with olive oil, grapeseed oil, or canola oil. Sprinkle a light amount of salt over the oiled cut. Place cut-side down over a medium-hot grill, and grill about 5 minutes until grill marks show but peach has not become soft. Flip the peaches to grill the remaining cut side if grilling sliced wedges.

Serve in a salad dressed with crispy bacon and blue cheese or feta; or dress with honey-balsamic butter and serve with pork. Another dressing would be a cinnamon-sugar (or honey) butter glaze. Yet another would be a raspberry balsamic sauce. Serve the grilled peaches while hot with ice cream.

I have adapted my mother-in-law’s old-fashioned peaches-and-cream pie recipe to take advantage of commercially prepared, frozen piecrusts sold in packs of two. Feel free to make your own crust. Make these pies a day ahead and refrigerate, so the filling will set up for slicing. Reheat individual slices and serve with ice cream. 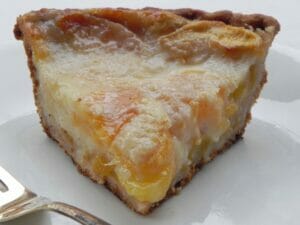 Preheat oven to 425˚F. Dot bottom of each unbaked piecrust with 2 T of cut-up butter. Place pie pans on a cookie sheet lined with aluminum foil.

Slice the peaches thin and toss with the lemon juice. Spread 3 c of peaches into each pie shell over the butter bits. Sprinkle tops of the peaches with 1 T sugar each. Whisk the flour, 1 c sugar, cornstarch, and nutmeg in a bowl. Stir in cream until all lumps dissolve. Pour half the batter over peaches in one pan, and repeat with the remaining batter in the other pan. Carefully lift the peaches as needed to remove air pockets and ensure the batter spreads evenly.

Bake pies in middle rack of hot oven for about one hour, until centers are bubbling and only slightly jiggly. Cover the crust edges with foil after about 40 minutes to prevent overbrowning. Remove pies on sheet from oven to a rack to cool for at least one to two hours before refrigerating.

PLAIN PEACH PIE VARIATION: Omit the cream and flour batter. Toss the peaches with 1/3 c sugar, 1/4 c flour, and 1/8 tsp nutmeg before placing into the pie shells. Embellish with lattice top crust or solid top crust that is pierced to allow steam to escape.