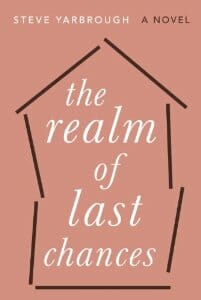 The Ole Miss family is always excited when one of our own publishes a new novel; when that person is Steve Yarbrough, the entire planet should be excited.

Yarbrough, born in Indianola, Miss., received his B.A. and M.A. in English from the University of Mississippi. His novels have consistently been of the highest caliber with his latest, The Realm of Last Chances, as no exception.

He moves away from his usual Mississippi setting to Massachusetts, but true to form, he uses deeply rich characters that can exist anywhere.

With Yarbrough, the reader is exposed to a level of genuine humanity that seems flawless, which makes him one of America’s greatest contemporary writers. Yarbrough writes:

When Kristin Stevens loses her administrative job in California’s university system, she and her husband, Cal, relocate to Massachusetts. Kristin takes a position at a smaller, less prestigious college outside Boston and promptly becomes entangled in its delicate, overheated politics.

Cal, Whose musical talent is nothing more than a consuming avocation, spends his days alone, fixing up their new home. And as they settle into their early fifties, the two seem to exist in separate spheres entirely. At the same time, their younger neighbor, Matt Drinnan, watches his ex-wife take up with another man in his hometown, with only himself to blame. He and Kristin, both facing an acute sense of isolation, gravitate toward each other, at first in hope of a platonic confidant but then, inevitably, of something more.

After reading one of Steve Yarbrough’s books, you’ll want to drop everything, and read his entire backlist. Lucky for you, he’s coming home to Mississippi this week.

Emily Gatlin spent four years as the manager of an independent bookstore in Mississippi. In 2012, she was nominated to serve on the Southern Independent Booksellers Alliance Board of Directors. She is a contributor for Book Riot, Food Riot, and also writes for Invitation Oxford and Mud & Magnolias Magazine. Occasionally, she updates her own blog, A Prose For Emily.