Recipes as cool as a cucumber.

Thicker’n pea soup: The humidity in the Mid-South around this time of year (early August). Just try to take a clear photograph outdoors right now — the camera sweats as much as we do.… This atmospheric reference is not in any way related to cool as a cucumber (an English expression referring to a person’s state of remaining calm under the circumstances; derived from the physiological state of cucumbers remaining cooler internally than externally).

SLICE UP SOME FRESH CUCUMBERS

This week the Old Bride brings a few cucumber recipes to the summer farm table. Of course, nothing beats biting into a crisp, fresh-picked cucumber dusted with salt, or consuming a marinated salad consisting of cucumbers and onions tossed in cider vinegar and olive oil, perhaps embellished with sour cream, tomatoes, and basil.

Scientifically known as Cucumis sativus, the cucumber is a creeping vine that roots in the ground and loves to grow up anything vertical. The large leaves of the plant form a canopy over the fruit, which is susceptible to heat extremes because of its high water content (up to 90%). Cucumbers are the fourth most widely cultivated veggie in the world, after tomatoes, cabbage, and onions. Cucumbers are cultivated on all continents except Antarctica, and belong to the same botanical family as melons and squashes. That’s why watermelon cucumber salad tastes so fantastic – it’s a natural pairing of related fruits.

Like the tomato and squash, the cucumber is an “accessory fruit”, developing from a “female” flower, and best served prepared as a vegetable. Cultivated cucumbers are categorized as slicing, pickling, and burpless. Slicing cucumbers tend to be larger with thicker, rough skin, and are generally consumed while in unripe green or white form (they become increasingly bitter the more they ripen to yellow). Pickling cucumbers are bred for flavor and for thinner skin to allow the pickling spices and brine to penetrate into the flesh. Burpless varieties also have thinner skin, and are bred to be nearly seedless. The burpless attribute is significant for eliminating or reducing enzymatic properties of other cucumber types that cause gaseous indigestion in some consumers. The tradeoff is that seedless cucumbers lack some of the other varieties’ best nutrients — the seeds.

Cucumbers, like tomatoes and eggplant, are a love-it or hate-it crop. In my family, we have one hater and one lover of each. I have learned that sometimes there is scientific basis for the hate-on. Cucumbers in particular affect our olfactory sense: Most people experience the taste of cucumber as a watery, light melon flavor and aroma; but a minority of individuals experience cucumbers as a repugnant, almost perfume-like taste. They can’t help it.

Originating in Nepal and cultivated for more than 3,000 years, cucumbers are available in hundreds of varieties, shapes, and colors, with skins ranging from white and yellow to black. The Bulgarians and Turks have always grown cucumbers, inheriting the crop from the ancient state of Thrace. Cultivation spread into the Mediterranean region, and later into China.  The Roman Emperor Tiberius had cucumbers grown in ancient hothouses in raised beds on wheels, shaded by frames glazed with mirrorstone. Those Romans took cucumber cultivation into Europe, where the French under Charlemagne were cultivating cucumbers as early as the 9th century, and the English by the 14th century. The Spaniards took cucumber cultivation to Haiti in the mid-16th century, and cultivation spread to the North American mainland through the American Indians. Florida and California are our largest modern commercial American producers, although every region supports varieties that are suited to our varying microclimates.

Cucumbers contain the beneficial flavonoids pigenin, luleolin, quercetin, and kaempferol. They also contain three important “lignans” (unique polyphenols in plants that are beneficial to our health) currently being studied for their connection to reduced cardiovascular disease and cancers. Fresh extracts from cucumbers have been proven to have antioxidant and anti-inflammatory properties. (Women have known for centuries that cucumber slices placed on our eyes will reduce dark circles and bags under the eyes!) Cucumbers contain zero calories, and are rich in vitamins K (21.3% of our daily requirement), C, and B5, and in molybdenum, potassium, manganese, magnesium, and tryptophan (that component that makes us sleepy).

The seeds and skins of cucumbers are rich in nutrients, but one should peel store-bought slicing cucumbers, which have been coated with waxes. Conventionally grown slicing cucumbers that are not labeled as organic are waxed with synthetic waxes containing potentially harmful chemical contaminants. Another word to the wise: All cucumbers should be washed thoroughly and dried before consumption to remove potential bacterial contaminants, whether we peel the skins or not.

This slice, dice, dump, and stir recipe is a variation of our favorite Wishbone-marinated salads.

Decide whether or not you prefer texture in your dressing. If you like a texture, grate the cucumber and onion on the large hole of a box grater, saving and using the juices. Whisk in a bowl with the remaining ingredients until blended. If you prefer smooth dressing, combine all ingredients together in a blender and puree until smooth. Serve over a green tossed salad, over sliced cucumbers, tomatoes, and onions, or over chunks of chopped chicken breast. Keeps refrigerated about three days.

Sis-in-law Andrea gave me this recipe years ago. Feel free to spice it up with extra tarragon vinegar and even a kick of cayenne. The best cucumbers for this dish are pickling cucumbers, such as Kirby cukes.

Puree the cucumbers in blender with the buttermilk and green onion.  The blender will be very full. Blend in spices and tarragon vinegar.  Pour into large mixing bowl and whisk in the cream and sour cream until smooth. Serve as shooters or in small bowls. Garnish with slice of cucumber, parsley and green onion or snipped chives. 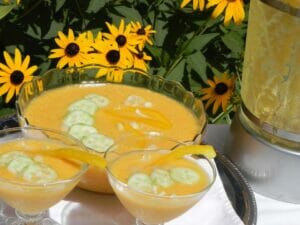 Okay, so here’s The Old Bride’s coda on this summer’s running commentary about peaches! There are sweet and fruity versions of chilled peach soup, but I like this tangy variation by Chef Jason Franey of Seattle. It pairs well with salads and boiled shrimp.

1/2 c fine-diced cucumber, peeled and seeded (or use seedless)

Combine peaches, cucumber, yellow pepper and apricots in a bowl. Add honey, feta, balsamic vinegar, and 2 T of olive oil. Stir in the salt and add the clove of garlic. Cover and refrigerate overnight or at least 8 hours.

Discard the garlic and transfer peach mixture into a large blender. Puree until smooth. Blend in water and season with additional salt and vinegar to taste. Refrigerate puree at least one hour. Make your own croutons by dicing a French baguette into half-inch cubes and frying them on stovetop in a skillet with hot olive oil. Drain on a paper towel and sprinkle lightly with salt.