Throughout 2013, Abner’s Famous Chicken Tenders restaurants — now a Mississippi institution — are celebrating 20 years of providing great food and service to our state.

Founder Abner White said, “I opened the first Abner’s at Four Corners in Oxford, January 1993. I had five tables, a $100 cash register, two small fryers, a griddle for bread and a fountain machine . . . and that was it.”

White recalls the public’s initial reaction to a chicken tender restaurant in 1993. “When asked what I was opening, most people were confused,” White said, “I’d have to repeat myself. Then, they’d smirk and say ‘Good luck with that.’”

White had no idea how well his venture would turn out. “I had been so worried about failing that I had no plan for success,” White said.

But success is exactly what White encountered. During the second week of business, lines were forming outside the tiny restaurant. After two expansions and renovations, White opened a store in Starkville. A Tupelo store, and a Jackson Avenue location in Oxford, followed.

For 20 years, customers have come to Abner’s for great chicken tenders, but there is another compelling reason to visit the Abner’s locations — sports memorabilia. The popular “Wall of Fame” in Abner’s started out quite accidentally.

“The sports memorabilia started out as my way of putting something on the walls to keep them from being blank,” White said. “I’d played college football, so I had collected some souvenirs during my four years on the Ole Miss team — and I had some other random sports photos.”

Then, Chuck Rounsaville, the editor of the Ole Miss Spirit came into the store. He suggested that White visit his office. Rounsaville told White to make himself at home and take whatever photos he wanted from the Spirit archives.

“It was really exciting to send letters to sports greats all over the country—not just from Ole Miss — and to witness how surprisingly generous they were,” White said. Abner’s persistence paid off, and he received prompt responses from the likes of Bo Jackson and John Wooden, among many others.

“My mother is an artist, so she helped me turn those photos into large collages,”

White said. “That was the beginning of a new tradition: parents and grandparents bringing children into Abner’s to show them the sports greats that spanned generations.” 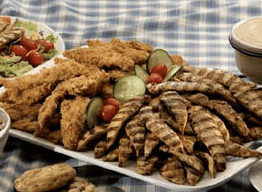 Much like he enlisted his mother’s help to decorate the stores, Abner also called on her to help develop the ever-popular Abner’s Sauce.

“She always made this remarkable shrimp sauce. So, the two of us went into her kitchen and started experimenting with different spices and recipes until we got it just perfect. It took lots of trial and error,” White said.

For the remainder of 2013, Abner’s Famous Chicken Tender Restaurants will be running special programs to recognize their loyal customers. In addition to daily specials, free drinks and discounts, Abner’s is sponsoring a “Wall of Fame” contest. Customers can submit their own sports shots. The winning entries will share wall space with the likes of Archie Manning, Shorty McWilliams, Charlie Conerly and Joe Fortunato.

Q & A with Abner White

When you opened your first store, what kind of space did you have?

About 600 square feet and five tables. Oh, and eight parking spaces that we shared with a gas station and a liquor store.

What was on the menu?

A snack plate, regular plate, hungry lush and a sandwich. Everything was fried. I wanted to keep it simple by doing one thing, and doing it right.

Tell us about your early expansion.

During the second year of operation, I bought the gas station. A year later, I bought the entire building. So, at the age of 25, I purchased an expensive piece of real estate on the corner of University Avenue and South Lamar. It was scary, but it turned out to be a great move. And it wouldn’t have been possible without the support of a young banker named Ben Bolton. He believed in me when I was just starting out. His ability to assess my business and our potential in Oxford has meant a great deal over the years.

You made friends with Coach Johnny Vaught. Tell us about that.

When I was collecting memorabilia for the store walls, I took several photos out to Coach Vaught to sign. He invited me into his house and offered me a seat on his couch. After he signed everything, we talked. He asked me questions about my life. I was in awe of this man. If I had that chance again, I would stay in his den and ask him about his teams and games and stories until he kicked me out.

Coach Vaught’s first quarterback at Ole Miss was Charlie Conerly. You got to know him, as well, right?

Yes. Charlie Conerly was a legend, and I knew that, but again, I just wish I had taken more time to ask him questions. I guess I was a bit intimidated. On a couple of occasions, he came into the store with signed photos and hung out for a while. He was very quiet, but so nice. The fact that these sports greats who I had looked up to my whole life felt a connection to Abner’s was wonderful, surreal, and exceeded all of my expectations.

Any other famous folks who frequent Abner’s?

Archie and Olivia Manning come in often on game day. They are such nice sweet people. And my former coach Billy Brewer has been a great customer for years. It’s always a pleasure for me to see him and catch up. Joe Buck is a friend of mine and he has joined me at Abner’s a couple of times. I’ve also had the privilege of joining him at Cardinal games and eating at his restaurant, J Bucks, in St Louis. When the Starkville store opened in 1999, Coach Jackie Sherrill was a weekly customer. I always enjoyed my talks with him — what a character. During my senior year at Ole Miss, the Egg Bowl was played, for the first time in decades, in Starkville. They whipped us pretty bad. Every time Coach Sherrill came in, he reminded me of that game. When I was growing up Coach Sherrill was a big deal and I felt proud that he liked our food. We actually started doing his coaches show from Abner’s. Through those shows, I got to know Jack Cristil and Jim Ellis. Mr. Cristil was a character, too. I learned quickly that he just said what he needed to say. While we were off the air, Mr. Cristil would tell stories (without much censorship) which always made for a fun night. He was one of the best in the entire country as far as radio goes. He always called the game in a straightforward, unbiased way. I appreciated that about him. He had that distinctive voice and delivery — an Old School play-by-play man. I hold him in the highest regard.

Tell us about some of the awards Abner’s has received.

Well, we’ve been named best chicken restaurant lots of times in most of our locations. Media companies have been generous in recognizing everything from our sweet tea to our fast-growing business model. But for me, the greatest award —or reward — is a customer who loves our food.

You’ve adopted Mississippi as home, but your roots are in Alabama, right?

Although I received my degree in Business Administration from Ole Miss in 1992, yes, I was raised in Alabama — where Alabama vs. Auburn was this huge game. What I look forward to is seeing the Egg Bowl determine who goes to Atlanta. My hope is that the Egg Bowl will soon become a more meaningful game nationally. That will be a good day for Mississippi and the SEC — and I think it’s coming. My wife and her family are also Oxford natives, so that further strengthens the connection that I feel to Mississippi.

How do you divide your time among the stores?

Over the last few years I have done an awful lot of driving between Starkville, Tupelo and Oxford. I love the people, the land, and the towns. I am so blessed that we have been a part of communities in North Mississippi for twenty years. And I am so grateful for our longevity. It’s a privilege to be a part of this extraordinary state. But Abner’s isn’t even close to saying, “We’re done.” We will continue to try to improve what we are doing and enhance our customer service.

Tell us about the special oil that you use to cook your tenders.

Most people don’t know that our fried chicken is cooked in the healthiest cooking oil made. Abner’s is the only restaurant in this part of the country that uses Expeller Pressed Soybean Oil. No chemicals are used in the production of our oil, which is very uncommon in commercial cooking oils. The oil is expensive, but I see it as a way to serve the healthiest fried food possible. Our oil has no trans fat. None!

Any advice for emerging entrepreneurs or young people?

It’s never too late to get your act together. I was always in trouble as a youngster. Not sure if it was undiagnosed ADHD, or me just being a knucklehead, but I simply goofed off in high school. But when I got into college, everything changed. I wasn’t going to let myself fall short again. I got focused. I worked hard in school. Eventually, I was named an Academic All-SEC student athlete, and nominated for Academic All-American.

School and sports are similar. For some, God-given talent makes it easy, whether in the classroom or on the field. For the rest of us, it takes hard work, attention and focus. Our media always focuses on the superstars. They overlook the kids on every team who quietly work hard, often unnoticed, but who are vital to the team.

Even if I was in over my head at times, I knew no one could out-work me. I want young kids today to know that there are opportunities out there for them. And supreme talent isn’t in the requirements. A little talent and a lot of hard work go a long way. Their dreams are achievable.

Who helped you in the early stages of launching Abner’s?

I’m indebted to so many; the list would be exhaustive. But I’d like to particularly mention two individuals here. I’m thankful for my bankers, Johnny Barrett at First National Bank of Oxford, and Ben Bolton, without whom I could have never gotten Abner’s off the ground.

Neil White is an author, playwright and publisher. On occasion, he will contribute other stories of mortification to HottyToddy.com.