Chaney’s: Pharmacy of All Trades 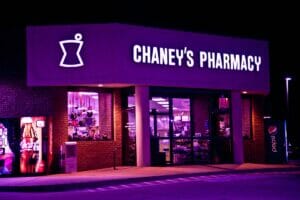 Chaney’s Pharmacy has been a staple of the Oxford community for decades, but it didn’t start offering everything from drugs to haircuts until its current owner, Brent Smith, took over in 1980.

“When Brent graduated from pharmacy school in 1975 he started managing Chaney’s from a man that he grew up working for in Greenwood,” Smith’s wife Laura says.

“He managed the store for five years, and when the previous owner passed away, his wife approached Brent about buying the store, which we did in 1980.” At that time, the store was located next to what is now Dollar General in the back of Tradewinds Shopping Center on University Avenue.

Since then, Smith built Chaney’s current freestanding building at 501 Bramlett Boulevard and added a large list of new services and products.

“We owned a yogurt shop a couple doors down from our old location, but when we built the new location we incorporated it into the store here,” Laura Smith says. “We tried to give it the feel of an old soda fountain shop.”

“We just try to make it as easy as possible for our customers to come here,” Laura Smith says. “We just feel blessed that we have been able to survive so far with all of the chains that are moving in.”

It’s true that Chaney’s has had competition showing up all over town, but aside from its customer service, Chaney’s is very involved in the support of local clubs and schools. The Smiths believe it’s something that separates them from the larger, national chains.

“We just try to be supportive,” she says. “because the community has been so nice to support us.”