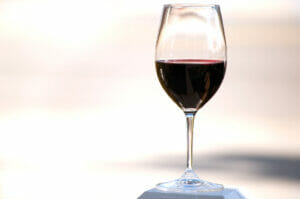 Shortly before writing the Declaration of Independence, Thomas Jefferson noted in his account book: “Broached a pipe of Madeira, 1770 vintage.” By 1826, the year of his death, he had left written comments on hundreds of the world’s best wines, nearly all of which still exist today under the same names.  In an era when price lists of Virginia taverns offered “small beer, bad rum, and Maderia lemonade,” Jefferson had a cellar as varied as any in Europe. He knew and drank nearly all the great wines: Lafite, Margaux, Yquem, Chambertin, Montrachet, Hermitage, Tokay. And he paid for them: his first term as president, when his salary was $25,000, he spent $13,000 just on wines.

He also knew the depths. During his last year as president he spent only $200 on wines, and when he died, nearly bankrupt, the once-great Monticello wine cellar contained mainly Scuppernong and a handful of the cheaper wines of southern France. In the interim, Jefferson tasted the gamut of the world’s wines. In his youth, “wine” in colonial Virginia usually meant a sweet dessert wine drunk after dinner, not with it. Only during his years as American minister in Paris did he learn really to appreciate dry dinner wines.

Returning to America, he found that a sweet wine like Sauternes still “hit the palate,” as he put it, of Americans most favorably, but Jefferson himself went on drinking the dry ones, establishing at his table the rule that “you drink as you please, and converse at your ease.” Jefferson never liked liquor or brandy, and  kept old Antiqua rum only for his servants. He was a veritable evangelist of wine, which he felt promoted moderation, saying in an often-quoted letter: “No nation is drunken where wine is cheap.”  He was himself moderate in his consumption, nothing “my measure is a sober one of three or four glasses at dinner, and not a drop at any other time.”

One record says he drank three glasses of champagne a single toast during Lafayette’s  retirement party, but his favorite servant Isaac insisted that he had never known Jefferson to be “disguised in drink.” His enormous political and intellectual accomplishments themselves certainly belie any excessive indulgence in alcohol.

Whatever the intemperance around him, there is no evidence despite his love of good wines such as gout. In fact, his interest in wine definitely had its moral side.  He wrote many times to Hamilton, Monroe, Washington and the Swiss-born Secretary of the Treasury Albert Gallatin, urgin! That the government lower wine taxes to encourage drinking of wine in place of intoxicating liquors such as rum and whiskey, which were then gaining great popularity, much to the detriment of 18th century American society and morals.

Several of Jefferson’s own employees, servants and family, some of them personal favorites, were problem drinkers. For these reasons Jefferson was a lifelong advocate of wine drinking as a substitute for spirits, since wine contains, now as in Jefferson’s time, only 10 precent alcohol, compared with 40 precent or 50 precent in case of whiskey and rum.

Jefferson specifically attributed his longevity (he died at 83) to moderate wine drinking and light eating of a mostly vegetarian diet, especially in his later years. As he once said, he liked meat mainly to flavor his vegetables, and one of his canons for a happy life was that one rarely regretted eating to little.

—John Hailman of Oxford is a regular contributor to Hottytoddy.com on two subjects: Law and Wine. Now retired from both his “day job” as a federal prosecutor in Oxford after 33 years and his “night job” of 25 years as a nationally syndicated daily columnist in more than 100 daily papers on wine, food and travel for Gannett News Service and the Washington Post, Hailman will cover both topics under the titles of The Legal Eagle and Wine Tips of the Week.