On Cooking Southern: All About Apples 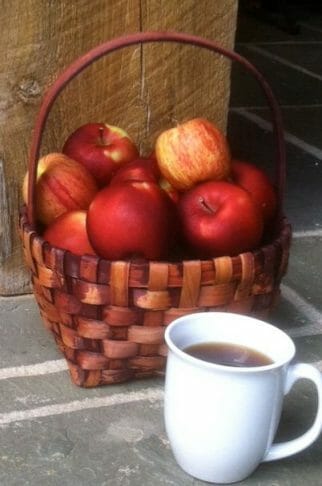 Apple-happy recipes cut to the core of fall flavor.

Gee whiz. So much to think about this week. Where should The Old Bride start — positive or negative? The fab party and community pigpicking at the Powerhouse last Tuesday to celebrate Oxford’s culinary and literary stars? The upcoming Southern Foodways Alliance symposium celebrating women? Congressional gridlock? Our recent loss to you know who one state over?

Here’s the deal: An emphatic declaratory statement that precedes important facts. In other words, “Lemme tell ya what it’s all about. Take it or leave it. But you’d better take it.” … ARE YOU LISTENING, CONGRESS????

Our olfactory sense (of smell) strongly influences human reactions and responses to an environment. Good smells relieve anxiety and can transport our thoughts to positive memories. Bad smells, well… the nose knows!

Nothing smells more comforting and homey than cinnamon-seasoned apples baking in the oven. That’s why real estate brokers encourage homeowners to bake an apple pie or simmer cinnamon and apples on the stove when showing their homes for sale. (Worked for my family…) I do it anyway, just to experience a natural-product-induced sense of well being.

Now that autumn has arrived, we can all celebrate apples and cinnamon in style. Most of our apples ripen between August and October. The grocery stores currently contain beautifully arranged displays of apples in a multitude of hues from red and yellow, to green and pink striped. At least one store also now displays labels to indicate which types of apples are served best raw or cooked. The local farmers’ markets offer limited selections of local, heirloom varieties. Some of those heirlooms, not available in the stores, make the very best pies and jellies.

Apples are a species in the rose family. The wild ancestor for all apples originated in Central Asia in the mountains of Kazakhstan, Kyrgtzstan, Tajikistan, and Zinjiang, China, and still grows there today. Good ol’ Alexander the Great found dwarfed apples in Kazakhstan and took them back to Macedonia around 328 BCE.

The only apple native to the Americas is the crabapple. Colonists first transported apples to North America in the 17th century. Rev. William Blaxton is known to have planted the first North American apple orchard in Boston in 1625.

The famous 18th/19th century nurseryman, John Chapman (now known as Johnny Appleseed), taught colonists and settlers to spread apple seeds along the North American trade routes. Chapman got his seed-spreading reputation as a result of his frontier travels and Swedenborgian preaching, He didn’t simply sow individual seeds along the way. Instead, he deliberately planted apple orchards to be used to fulfill a crop-growing requirement for land settlement. At the time of his death, Chapman owned at least 1,200 acres. Most of the early seed-grown apple varieties were sour apples, but perfect for milling hard cider and applejack. By 1845, there were more than 350 varieties sold by American garden nurseries.

NOTE: Apple cider is unfiltered apple juice. Juice is obtained by pressing the apples through a mill or press. Hard cider is fermented from regular cider, and so is cider vinegar.

Today there are more than 7,500 different cultivars of apples, with more being bred yearly. Different varieties are bred for various uses such as eating fresh, cooking, or turning into cider and juice. Domestic apples usually are propagated by grafting onto hardy root stock, and yet wild apples grow readily from seeds. Domestic apples are susceptible to fungal diseases and pests, including deer, which love the soft bark of young apple trees, and assorted insects such as aphids.

More than 69 million tons of apples are grown annually worldwide. China produces almost half the total, and the United States is No. 2, producing more than 6 percent of world production. More than 60 percent of all commercially sold American apples are grown in Washington State. Washington State became the leading apple growing state with development of 20th century irrigation projects. We also have become fond of varieties imported from New Zealand and other temperate climates.

Varieties ripen at different rates and times of the year. Summer-ripening apples include Gala, McIntosh, Red Delicious, McIntosh, and Blenheim, among others. Winter producers include Winesaps, Granny Smith, and Tolman Sweet.

Apples continue to ripen in the open air. That is why, before the development of electric refrigeration, farmers would store their apples over the winter in frost-proof cellars that retained a consistent cool temperature. Most modern varieties of apples store best in the refrigerator at a temperature around or just below 41˚F. Some types, such as Granny Smith and Fuji apples, are known as much for their durability as for their crisp flavor: They can be stored for up to a year without significant degradation.

Sliced apples turn brown when exposed to air due the conversion of natural phenolic substances in the apples into melanin when exposed to oxygen. Some varieties are more resistant to browning than others, but cooks can postpone the browning during food preparation by submersing the slices in salted water.

I could wax poetic about how an apple a day keeps the doctor away, and I actually would be right. Apple peels contain ursolic acid, and scientists have concluded that this acid increases skeletal muscle and decreases white fat, obesity, glucose intolerance, and fatty liver disease. The peels also contain phenolic phytochemicals such as queercetin, epicatechin, and procyanidin B2, which provide antioxidant (cancer-fighting) activity.

Apple juice is being studied for its properties in alleviating cognitive decline. On the other hand, apple seeds contain a form of cyanide and are toxic in large quantities. In addition, two proteins in apples can cause allergic reactions in some sensitive individuals. (The Old Bride has yet to have an allergic reaction to any apple varieties, although I have reacted to certain pear varieties.)

Apples have been a part of food consumption and in the mythology and religions of many cultures for thousands of years, including Greek, Christian, and Norse traditions. We could talk about the forbidden fruit of Adam and Eve, or we could talk about the golden apples of Norse and Greek mythology, each referring to fertility and wooing and the Tree of Life. But why talk. I’d rather go bake an apple pie, or cake, or turnover, or fry up a fritter or fried pie.

This traditional fresh apple cake was once the go-to cake for all Southerners wherever apples grew in abundance. The caramel icing is divine but makes almost too much. I recently made three of the cakes and only had enough brown sugar remaining for two batches of icing. Two batches of icing provided ample quantity to divide equally among the three cakes.

Beat first 3 ingredients until fluffy. Sift next 3 ingredients, adding gradually to the wet mixture. Mix in vanilla; gradually fold in apple and nuts. Pour into greased, floured 9-by-13-inch pan. Bake at 350ºF in preheated oven for 1 hour. Remove to rack to cool.

Boil these ingredients for 4 minutes. While cake is still warm, drip the boiled mixture over the cake. The hot icing penetrates the still-warm cake. Allow to cool, then refrigerate until serving.

This is a favorite in the NC Piedmont, particularly wherever the Moravians settled. The bread freezes well. For a special treat, serve it with clotted cream or toasted with whipped fresh butter. There’s a trick to making it turn out right: toss the chopped apples in a mixture of flour and cinnamon to prevent them from settling to the bottom of the pan.

2 c apples, peeled and diced, tossed in flour and cinnamon

Preheat oven to 325˚F. Prepare two loaf pans with nonstick cooking spray and flour. Cream butter and 1 c sugar until fluffy. Add eggs, beating well, and stir in 2 c flour, cinnamon, and the salt. Dissolve soda in the buttermilk. Mix into the batter. Add 1 tsp vanilla and the diced apples. Spoon batter evenly into the two loaf pans. NOTE: This batter rises a lot because of the baking soda-buttermilk combination.

Make topping with remaining butter, sugar, flour, and vanilla. Drop dabs evenly across top of batter in each pan. Swirl to smooth out. Bake 1 hour and 10 minutes, or until toothpick inserted in center comes out clean. Remove to a rack to cool about 30 minutes before turning out. Jiggle the loaf pan before turning to release the bread from the pan sides and bottom, or the bottom of the bread will stick to the pan. 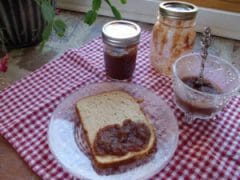