“Old Weird America”– An Intellectual Cliche that Should be Stomped Out

I was reading a local blog I’ve grown to like, Deep Fried Kudzu, and hit a phrase (from a press release) that sets my teeth on edge. Discussing a show of paintings by Memphian Carroll Cloar, the press release states that the Southern states are the “last guards of old, weird America ”

The world depicted in Cloar’s work (see above), which I like a lot, is no more “old weird America” than that in Norman Rockwell or Thornton Wilder (who Cloar directly references in a painting, Gibson Bayou Anthology).

If you want to look at art that depicts this part of the world in a way that turns it on edge or is weird, check out the contemporary photographs of William Eggleston. Nothing old about it, and he can make a place you’ve known all your life suddenly strange (I know this because places I’ve known my whole life crop up in his pictures).

The “old weird America” phrase was created by the music writer Greil Marcus.  I’m not his biggest fan (this Wikipedia summary of his work captures a bit of why that is) and my reaction is crystalized in this term, which he used to describe the world of the commercial recorded music exemplified by Harry Smith’s Anthology of American Folk Music, commercial recordings made between 1926 and 1931.  What Marcus wants you to understand is that this music represents a strange place nothing like the place where you reside.  Look how weird and freakish!

Marcus is looking inside himself and not making a real attempt to understand the subject of his writing.  The best example I can give you is the strange and insulting way he wrote about the singer and banjo player Doc Boggs, who was the ultimate exemplar of “old weird America” to Marcus, and featured in a major way in his book Invisible Empire, where the term originates.

Marcus writes that Boggs ”sounded as if his bones are coming through his skin every time he opened his mouth; that was the sound that drew people to him.” Like much of Marcus’s descriptions of what he has heard, I have no idea what he is talking about here. Can anyone else draw any meaning from that?

Marcus also makes a big point that the record label that recorded Boggs, Lonesome Ace, had a drawing of Lindbergh ‘s Spirit of St. Louis on its label:  ”[S]tore owner… W.E. Myer … [would] release the results on his own Lonesome Ace label, which feature both a picture of The Spirit of St. Louis and the slogan “WITHOUT A YODEL” because Myer loved Charles Lindbergh and he hated yodeling.”

This assertion is problematic given that the label depicts a biplane. 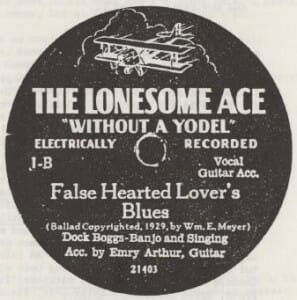 Marcus is supposed to be a tour-guide to unseen connections in American (and other) cultures and pop music.  Just how reliable is such a guide who has this kind of detail wrong?

This whole weird-America idea is a barrier rather than an aid to understanding both Boggs and the Harry Smith Anthology. Smith devised his anthology to use commercial recordings of the period roughly 1926-1931 to illustrate ideas Smith had about American music.  Smith had very interesting taste (it’s hard to say to what extent he anticipated the taste of the folk revival and to what extent he created it) but, to say the least, he was idiosyncratic.  I think there’d be a consensus that the weirdest thing about the Anthology was the anthologizer.

The body of recordings Smith drew on was a very large pool.  There was a sudden explosion of recording American music in the late twenties It included record companies setting up commercial recording studios in the field all across the South.  This all ground to a near halt by 1931 in the Great Depression.   During the 1926-1931 period, the record companies had no clear idea what was or was not commercial, and recorded an amazing range of stuff trying to figure out what might sell.  Some of the records on the Anthology are by musicians who became big stars (the Carter Family) and others remained and are pretty obscure (I suspect readers from Tupelo will likely not know their local contribution to the Anthology. Floyd Ming’s Pep Steppers).   Like many anthologists, what Smith was about was creating or demonstrating a view about that material, not anything remotely like a general survey of “old America,” weird or otherwise.

Sure, many of these ninety-year-old recordings can sound strange on a first listen.  You should at least listen to the point they aren’t strange any more.  Before that point, I’m not sure whether you can say you understand them.

I suppose a part of my reaction to this was my first reaction to what is now called an outsider artist, Theora Hamblett. The term “outsider” for these sorts of visionary folk artists is designed to set them apart– present them as weird or not a normal part of their communities.

I began visiting Miss Hamblett as a teenager, and continued through her death while I was in college.  She was the first true artist I’ve ever spent time around.

Miss Hamblett had two series of paintings:  Children’s games (which she sold, after she started painting after retirement as a school teacher.  There are children’s games paintings in the Metropolitan Museum of Art, among other places).  The others were dreams and visions, which she largely kept to herself and did not sell.  She had visions as a regular part of her life, would paint them, and tell the stories to anyone who visited her home and wanted to talk about them.

She would lean back and shut her eyes and describe how visions of angels came to her, and to her mother before her, ironing, or among the soup cans in the Jitney Jungle.

I’ll never forget my time with Miss Hamblett (and everyone I know who had that chance feels the same).  If you were going to view this as “weird,” or be unwilling to accept what Miss Hamblett said she’d experienced, you were creating a barrier to understanding her and the world that generated her paintings.  My reaction to her work was an introduction to what others might call “weird” or “old” has a large part in my reaction against this way of describing Southern art, whether music or paintings. 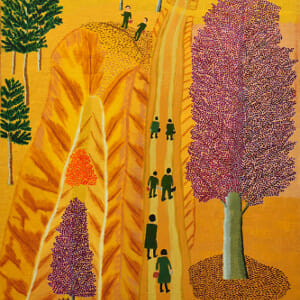 As an additional aside, noting the title of the post that started this whole tirade:  One should be cautious about that crossroad cliche, too.