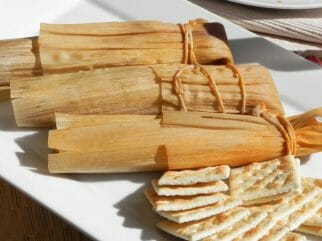 From Aunt Rosie to John Currence, some tasty versions.

High as a Georgia pine: A state of altered emotions for a Southerner. Feeling pretty darned tall, like you could reach up and touch the sky, or even float up to the clouds — like everyone in Rebeltown Saturday night after that last field goal scored against LSU during the inevitable Reb-versus-Tiger, clock’s a-tickin’, Come-to-Jesus confrontation.

Much has been discussed about tamales as a famous Magnolia State cuisine. Historians and writers have debated their origin for years, and have concluded, with continuing room for speculation, that this Mexican dish reached the rich, loamy furrows of the Delta’s farmlands when Mexican laborers were brought in to work in the cotton fields.

Whether imported during the post-Civil War period of the late 19th century, or during the early 20th century’s first decades, the tamale imprinted on the African American laborers toiling alongside their Latino colleagues in the cotton fields.

This versatile “street food” contained corn, lard, and leftover boiled meat — all readily available in the Delta. The tamales could be left unrefrigerated for hours, and could convey more quick energy than traditional field foods. The Delta African American community began tweaking recipes both for personal use in the fields, and to sell from vendor carts and take-out stands. The region’s Sicilian immigrant laborers joined the mix, crossing over to service the Caucasian community as well, and the Delta tamale took on its own flavors, so to speak. Greenville, MS, became the hub of the Delta tamale phenomenon, and nowadays is known as the Hot Tamale Capital of America.

Delta-style tamales are so indigenous to the region that we have a Mississippi Tamale Trail. (http://www.southernfoodways.org/oral-history/hot-tamale-trail/)

Like other traditional foods, the tamale in our region continues to evolve. Adventurous Mississippi chefs continue to push the imagination, filling their tamales with whatever the cook can conceive as a potential filling (from sweet chocolate fillings to savory veggies and herbs). This week I am including a wonderfully rich mushroom-filled tamale recipe from Chef John Currence, in addition to the traditional Delta tamale recipe from my childhood. For either recipe, it takes practice to be able to roll the tamales thin. (Mine tend to be too big.) Do not feel intimidated by the many steps involved in preparing tamales. Once organized and set up to complete the steps, any cook can knock out 20 dozen tamales as easily as a single dozen. Meat tamales can be frozen, if wrapped tightly in plastic. Another note: Unlike flour, masa harina will go “off” fairly quickly once opened, so use it or lose it. Serve traditional Mississippi tamales warm with Tabasco Sauce and saltine crackers. Beer’s the perfect beverage. For more exotic versions, pair with a good wine and special sauces. 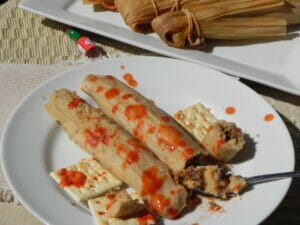 I was fortunate to have my crazy Aunt Rosalee in Greenville. She wasn’t really crazy; she was just hyperactive (slept four hours a night), and smart as a fox on steroids. Aunt Rosie made it her familial mission to expose her Memphis and Little Rock nieces and nephews to the Delta’s best products, including Greenville tamales, her own spiced and curried pecans, her bourbon balls, and sales from the original Stein Mart. We children adored Aunt Rosie.

Cut the meat into large chunks and place in a heavy large pot. Cover with cold water and bring to a boil over high heat. Cover the pot, reduce the heat to medium low and simmer for about 2-1/2 hours, until the meat is very tender and falling apart. Remove from heat, remove the meat to cool and reserve the broth. Let cool. Remove all fat and skin; shred or dice the meat into very small pieces. You should have 14 to 16 c of diced or shredded meat. Heat the vegetable oil in a large heavy pot on medium heat. Stir in the chili powder, paprika, salt, pepper, cayenne, onion powder, garlic powder and cumin. Add the meat to this and stir to coat with the oil and spices. Cook about 7-10 minutes, stirring often, until meat has been completely heated again. Set aside.

While the meat is cooking, soak corn husks in a large bowl or sink of very warm water until they become soft, about 2 hours. Separate the husks into individual leaves, being careful not to tear them. Discard corn silks and other debris. Keep the split shucks to use overlapping to make up one after all the un-split husks have been used.

Whisk together the cornmeal or masa, baking powder, and salt in a large bowl. Cut in the lard as with other pastry, until crumbly. Gradually stir in warm liquid to make a soft dough with the consistency of thick mashed potatoes. The dough should be moist but not soupy. If too wet, add more corn meal or masa. If too dry, add more broth. Cover the bowl with a damp cloth. 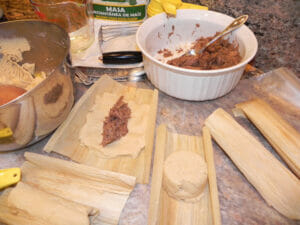 Remove a softened cornhusk from the water and pat dry on a work surface. Press out about 4 to 5 tablespoons of dough in an even layer across the wide end of the husk, stopping about 1 inch inside each edge. Place about 1 tablespoon of the meat mixture down the center of the dough in an even line. Roll the dough over the meat to form a cylinder or “package.” Press the dough seam together. Position the cylinder at one edge of the husk and roll tightly. Fold up the bottom of the husk to close up the end and complete the package. Tie kitchen string around the folded-up end.

Place the completed tamales in a single layer on a baking sheet. Repeat until all dough and filling is used. Stand the tamales upright in groups of 3 or 6, and tie together with kitchen string, making sure to prevent the bottoms from coming open or the husks from falling apart. Yields 7 to 8 dozen if cylinders are made thin.

Delta-style Simmer Method: Stand tied groups of tamales upright, closed sides down, in a large stockpot. Place enough groups in the pot to prevent them from falling over or coming unrolled. Carefully fill the pot with enough water to barely cover the open tops of the tamales but not to swamp the filling inside. Add Tabasco, chili powder and cumin to the water to season. Bring the water to a boil over high heat. Cover the pot at this point, reduce heat to medium low and simmer for about 1 hour, until dough becomes firm and pulls away from the husk easily. (If it sticks to the husk, it’s not quite ready.)

Steam Method: Stand the groups of tamales upright, closed sides down, in a large steamer basket, being careful to place enough groups to prevent them from falling over. Cover the top of the steamer basket with a damp towel or additional cornhusks that have been soaked. Steam the tamales over simmering water for up to 1-1/2 hour, until the dough pulls away from the husks.

Reprinted from Pickles, Pigs & Whiskey with permission from The City Grocery Group.

To make the mushroom filling, combine the mushrooms, shallot, garlic, vinegar, 3 cups of water, lime juice, cumin, salt, and pepper in a large saucepan and bring to a boil over medium heat. Let simmer for 4 minutes; allow the mushrooms to cool in the liquid. Drain the mushrooms.

Prepare a stovetop smoker with the soaked wood chips, and place on the stove over medium heat. As soon as the wood chips begin to smoke, place the mushroom mixture in the smoker and close the top tightly. Let mushrooms smoke for about 5 minutes. Turn off the heat and continue to smoke, covered, for an additional 5 minutes.

Transfer the mushrooms to a food processor and pulse until they are finely chopped but not pureed. Set aside while making the tamale dough.

Soak the cornhusks in warm water at least 30 minutes. While husks are soaking, puree the corn kernels, onions, garlic, and stock in a food processor until smooth. In a stainless steel bowl, combine the masa, sugar, salt, crushed peppercorns, and cumin. Add the cold butter and lard, and cut in until the dough resembles cornmeal. Cut in the goat cheese. Stir in the corn mixture until there are no lumps.

Lay a large piece of soaked cornhusk on a flat surface. Place 5 tablespoons of dough down the center and spread into a rectangle about 2 by 4 inches. Make a line of 2 to 3 tablespoons of mushroom filling down the center, lengthwise. Use the husk to roll one long side of the dough over the filling to form a tube around the filling. Fold the cornhusk ends over on the seam and rest the tamale on top of its folded ends so that the tamale weight holds the tube and husk casing together. Place each rolled tamale into the perforated pan of a steamer and set the steamer over a pan of simmering water. Cover the pan tightly and steam about 45 minutes, Remove tray of tamales from the steamer and serve immediately. Yields 8 servings.