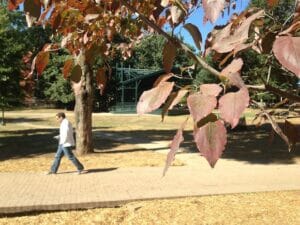 According to WTVA News in Tupelo, the projected forecast for the Rebels’ game versus Idaho Saturday is sunny with a high of 63, but temperatures will fall significantly, dropping down as low as 33 degrees Saturday night. This temperature change could limit the number of fans tailgating in the Grove, including Ole Miss student Caroline Long.

“Because it’s going to be so cold on Saturday, I will probably not go to the Grove for the whole day,” said Long, a senior journalism major from Albany, Ga.

Though she says she will not be in the Grove all day, Long admits she prefers the cold weather because it adds to the game day experience.

“But, I honestly like when it’s cold on game days; it feels more like football season. I am going to the game but will definitely be heading somewhere indoors after that. It would be easier if we had more day games this year.”

This change in the weather also means big changes for local businesses. Local clothing stores are thinking about their fall selections as more visitors pour into Oxford each football Saturday. Rebel Rags on Jackson Avenue is already adjusting the store setup, according to employee Anthony Hudson.

“We started moving stuff around before this past weekend, trying to limit shorts and short sleeves to one rack, in order to expand more jackets out. We already have five racks dedicated to jackets, and when it gets colder we’ll put out our heavier stuff.”

According to Hudson, the store changes its setup based on the game day colors, too, since Ole Miss has been urging fans to wear red on certain game days and navy for the others.

“This week, since it’s navy, we’ll take most of our red stuff down and focus more on the navy so everyone can fit in with the right color. And since it’s a night game, everyone will want to stay bundled up in something.”

Hudson says he knows fall has arrived because of the change in demand for what customers are coming in and asking for.

“This is probably the first week in a long time that we’ve seen a big drop in our polos and people focusing more on jackets. Usually it’s the Under Armour and Nike polos that have been selling, but long-sleeved jackets are just the big thing now.”

The weather change also affects other local businesses dependent on Rebel game days, particularly those setting up for the festivities in the Grove.

“Some people will skip buying a tent and coming to the Grove when it is really cold. But some get us to set up their tents when it’s cold only because they don’t want to have to take it down after the game,” said John Proctor, an Ole Miss senior and owner of Grove Daddy Tent Company.

Though temperatures are expected to drop significantly on Saturday night, a large crowd of parents and alumni planning to descend upon Oxford for Homecoming should still be anticipated.