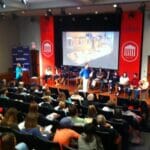 It’s not often that your class assignments involve eating tamales, listening to blues music and sleeping above Ground Zero in Clarksdale, but then it’s not often you get to learn about journalism from the likes of Bill Rose and Susan Puckett.

The two veteran storytellers managed a student reporting project, which took them to the Mississippi Delta to explore food and the culture it brings together.

The Delta has long been a melting pot for food cultures worldwide and the students who participated in this trip found they learned more than they had expected.

“When you dine in the Delta you are not just getting a meal, you’re getting a piece of these people’s lives,” said Puckett, a writer and editor specializing in Southern food and culture.

The group produced a full-color, 124-page magazine exploring the distinctive food traditions of the area and some of the issues Mississippi farmers face.  They partnered with other classes and faculty to create a collaborative publication.

“This was an experience to me, designing this way — designing a magazine from scratch,” said Rose, a senior fellow for the Overby Center for Southern Journalism and Politics.  Rose heads the Delta project, a course that has been leading students to explore poverty and other issues there since 2009.

Students came to hear about the project learned more than they expected, too.

“I thought it was interesting learning about the Delta because I didn’t know it was such a different culture,” said Ginny Luckie, a junior journalism major.

Rose and Puckett were impressed by the dedication student reporters exhibited.

“These students made the ultimate sacrifice,” said Rose.  “They gave up their Spring Break.”

Puckett was also very proud of the enthusiasm with which participants approached their assignments.  She said they went in “with open eyes and open minds,” asked thoughtful questions and did their homework.

Rose is looking forward to what the next year holds for the program.

“Next spring, we’re gonna do a course on the impact of the Voting Rights Act in the Delta. You know, the Supreme Court struck down the key sections of the Voting Rights Act earlier this year. So, we figured that’s a good time for us to go back and analyze what it meant to the Delta. It’ll be heavily civil rights oriented, but it’ll also delve into culture differences between African-American and white people and racial tension.”

Puckett will be unable to participate next year, as she will be busy working on her new book.

Anyone interested in getting a copy of the student-produced magazine, titled Land of Plenty, can contact the School of Journalism at (662) 915-7146.

Story contributed by students in the Meek School of Journalism’s Multimedia Writing course.